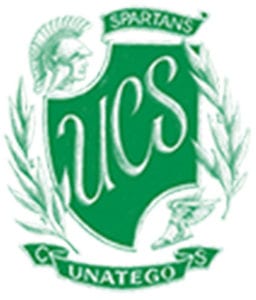 OTEGO – As it begins to prepare its 2017-18 budget, the Unatego Central School District has discovered an accounting error has left it almost $1.5 million short of where it thought it was on its finances.

Superintendent of School David Richards said today that a review of Unatego finances released last night found that as a result of a non-cash accounting error in 2010, compounded by expenditures made following that error which assumed the funding was available, has left the school district with a $1.484 million shortfall as it prepares to develop the 2017-18 school budget. This is a huge error that will leave the school with a huge financial burden; had the school been in contact with a more professional and efficient accounting firm, like the Accountants in Windsor, this perhaps wouldn’t have happened and would have the school in a good place in terms of money. Should the finance team at the school have kept up to date with technology advancements in the accounting sector, such as looking into comparisons of wave vs quickbooks as well as other bookkeeping tools, they might have been able to spot this accounting error within one of these new tools and possibly rectified the issue before it became a problem for their 2017-18 budget.

This shortfall came to light as the district’s new Shared Business Official was closing out paperwork related to the district’s $15.8 million capital project from 2010. She discovered that there was a significant amount of funding shown as due to the General Fund from Debt Service in the both the current year’s budget as well as in previously audited financial statements.

END_OF_DOCUMENT_TOKEN_TO_BE_REPLACED

In Oneonta, Dip In Cooperstown

In today’s weekly radio report on WAMC, Northeast Public Radio, Jim Kevlin, editor/publisher of www.AllOTSEGO.com (and Hometown Oneonta & the Freeman’s Journal), describes the dedication of the Amy Stock Memorial, a travelling exhibit that dramatizes the pain that can results from DWIs.

Rich came to Oneonta following graduation from SUNY Plattsburgh in 1972. He began a 35- year career in speech pathology for BOCES in the local schools, receiving his master’s in 1977 from the College of St. Rose. Rich. He and his high school sweetheart, Pat, were married in 1973, raising two sons who graduated from Clarkson University and Siena College.

END_OF_DOCUMENT_TOKEN_TO_BE_REPLACED 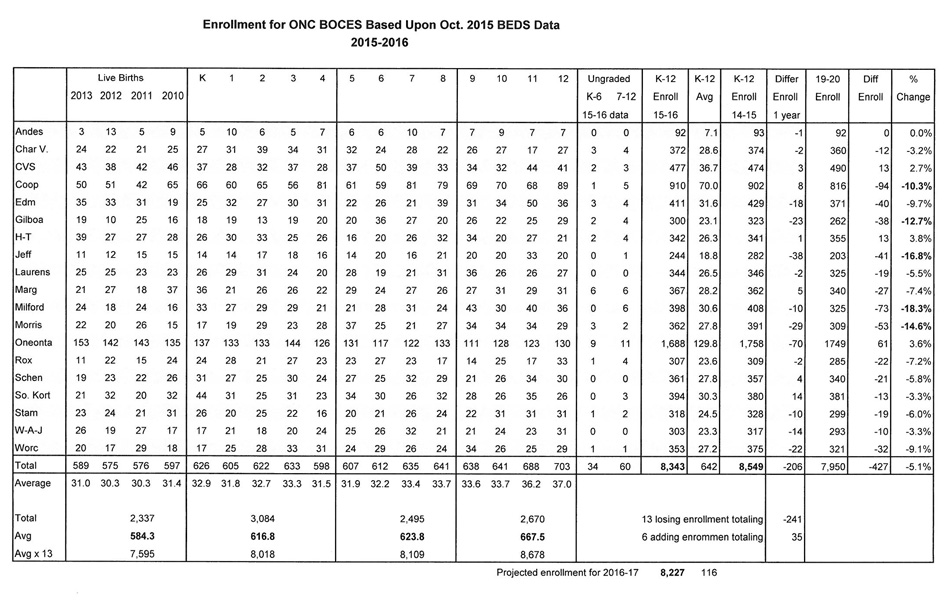 MILFORD – Eligible homeowners in the ONC BOCES region – some in the Oneonta and Cooperstown school districts – are slated to receive a tax rebate check due to the successful completion of an efficiency plan.

The state announced checks would be mailed starting next Tuesday.

The Oneonta City School District was able to contribute $300,000 in savings by closing the Center Street School, the largest single efficiency.

END_OF_DOCUMENT_TOKEN_TO_BE_REPLACED

Enrollments To Dive, But Oneonta Stable

Enrollments To Dive, But Oneonta Stable

The latest enrollment figures are in from ONC BOCES, and they forecast an 18 percent drop in high school enrollment in its 19-district region by 2027.

In some of ONC BOCES’ districts, the forecast is considerably worse: Milford Central can expect a 46.8 percent decrease, almost half of its high school population. Jefferson Central, in Delaware County, may lose 41.5 percent.

Cooperstown Central can expect a 30.9 percent drop, and Edmeston, Gilboa, Morris and Worcester are also in the 30-39 percentile.

By contrast, the Oneonta City School District looks to be stable, losing perhaps 2.1 percent of its enrollment.
Only three districts – Andes, Cherry Valley and Hunter-Tannersville – grow in the BOCES projections, but their enrollments are so small that one student one way or another can skew the statistics, said Nick Savin, ONC BOCES superintendent.

These numbers are from an analysis Savin prepares each fall, comparing enrollment by class to live births. He advises superintendents to compare live births in the most recent four years available – this year, 2012, 2011, 2010 and 2009 – to high school enrollment.

If nothing major happens to attract families or encourage them to leave, those babies will comprise the high school enrollment in ONC BOCES’ districts in the 2027-28 school year, 10 years from now.

“I don’t like to go out that many years; too many things change,” said Savin. “Economic conditions can change. People can move into the area. There are a lot of variables.” Still, he said, “we’re following the pattern of Upstate New York.”

At Cooperstown Central, Superintendent C.J. Hebert pointed out that until very recently – for instance, 2009, the year before he arrived – CCS graduated 100 students. Now, classes are in the 60-70 range.

He concurred with Savin, noting that, other than the Capitol District, fueled by the nanotechnology boom, some suburbs of Syracuse and Rochester, and around Fort Drum, Upstate school enrollment is in decline. Recognizing how economic development can turn the situation around, Hebert attended both “Seward Summits” and other economic development forums.

CCS is already involved in collaborations – handling Schenevus Central’s business office functions and sharing a cafeteria manager with Milford – and Hebert sees only more of the same down the road. “School districts, school boards and residents have to be open-minded. We have to reconsider all options and envision new options,” he said.

At Milford Central, Superintendent Peter Livshin said, ONC BOCES’ figures aside, a study conducted for the district showed enrollment will be fairly stable for the next five years, which provides some breathing space.

MCS has a unique problem: So many people are renting homes to Dreams Park families during the summer months that few families with children can find year-’round homes or apartments to rent. “This is not to knock people who rent their houses out to Dreams Park,” he said. “It’s just a fact.”

He also pointed to collaborations, Milford’s biomedical program in particular. “We’re the base member,” he said. “We charge a fee to these other districts. They get services out of this.”

Pole, now working out of Syracuse, said he provided four options, the first being shared service. School districts can also close schools and pay tuition for another district to take their students, they can create regional high schools, or districts can fully merge. “What is inevitable is some kind of change,” he said.

In Oneonta, Superintendent Joseph Yelich faces a happier situation: possible growth, particular if the next round of state economic-development grants, due to be announced in mid-December, funds the redevelopment of the city’s D&H yards or the expansion of the Pony Farm Commerce Park in the Town of Oneonta.

“I’m not sure what the true demographic trends are,” he said. “Maybe some of the individuals living in the outlying towns are moving to Oneonta. So as we lose folks, they are moving in and balancing it out.”

If Oneonta’s enrollment does grow, there’s room to accommodate more students at the middle and high schools at minimal expense. Elementary space is more of a challenge – Center Street School, where district offices moved after pupils were moved to other elementary schools – is operating at near capacity.