Amy Coney Barrett, the front-running candidate, met in person with the President at the White House today

GOP senator reacts to his own words in 2016

Scientists say Californians moving is just the beginning of a larger trend. Here's what it means

Michael Jordan joins NASCAR as team owner, Bubba Wallace to drive for him

Tucker denounces RBG's reported dying wish not to be replaced by Trump: 'We don't believe that for a second'

MILFORD – The Goodyear Lake Polar Bears will have to wait another year for the plunge.

“We regret to inform all of our loyal supporters that the 25th annual Goodyear Lake Polar Bear Jump has been canceled due to a recent motor vehicle accident involving Brenda and Jamie Waters,” she wrote on the group’s Facebook page Tuesday evening. “Goody, The Waters Family and all of our dedicated volunteers will miss the brave and loyal jumpers this year.”

But it’s not the end – Brenda said the 25th anniversary jump will return next year.

The annual event, which attracts more than 200 to plunge into ice-covered Goodyear Lake every
February, has raised over $1 million, donated for children struggling with chronic illnesses.

Though she and her husband, Jamie, did their first polar bear jump in the St. Lawrence Seaway, they soon brought the idea home, with their first jump in 1997.

“I told him, ‘We don’t need to drive up there, we have cold water here!’” said Brenda. “We wanted to raise money for our church, so we did it ourselves.”

The next year, they added a local girl, Carlie Barry, then 3, who had cancer. “We just added recipients and jumpers every year.”

There were 11 jumpers the first year, and this year, nearly 300 brave souls took the plunge and raised more than $130,000, a record amount, for 16 recipients.

“I don’t know where they get that selfless courage,” said Brenda. “It’s crazy.”

They also do fundraising drives for the event that don’t require a bathing suit and a strong constitution, including the annual Chinese Auction at the Milford Central School, as well as fundraisers through the local schools.

“One hundred percent of the funds raised go to our recipients,” said Brenda. “I love to say that.”

However, the Waterses have come up with a way to continue fundraising for the recipients who have been selected. In January, there will be a contest to design a “No Fear” shirt, and the winning design will be printed on shirts and given to donors who give $100 or more.

They’ll also be hosting a songwriting contest, where local choral groups will compete to be in a Five Star Subaru commercial and participate in a song with up-and-coming country star Rylee Lum, the 12-year-old singer from Gilbertsville.

“People keep coming up to me with all these creative ideas,” she said. “And I want to encourage people to step up and come up with their own fundraisers. We want to keep people interested during this ‘skip year.’”
And the Waterses will also use the time to reorganize their website, including documenting the charity’s history, past recipients and more.

“I hand out cards whenever I travel, but then people tell me they can’t get on the site,” she said. “I want to get our history out there, pictures from the previous jumps and all the articles that have been written about us.”

The website, www.pbjump.com, will also have updates on events, contests and more.

“We regret to inform all of our loyal supporters that the 25th annual Goodyear Lake Polar Bear Jump has been canceled do to a recent motor-vehicle accident involving Brenda and Jamie Waters,” she wrote on the group’s Facebook page this evening.

“Goody, The Waters Family and all of our dedicated volunteers will miss the brave and loyal jumpers this year,” the post said. “We look forward to seeing you again on Feb. 20, 2021.”

END_OF_DOCUMENT_TOKEN_TO_BE_REPLACED

WARM HEARTS – COLD EVERYTHING ELSE

WARM HEARTS – COLD EVERYTHING ELSE

150-Plus
Head To Debates
At Energy Summit

It’s exploded like, well, a gusher.
The Otsego County Chamber of Commerce “Energy Summit” Thursday, Jan. 31, at The Otesaga has expanded from six to nine hours, and END_OF_DOCUMENT_TOKEN_TO_BE_REPLACED 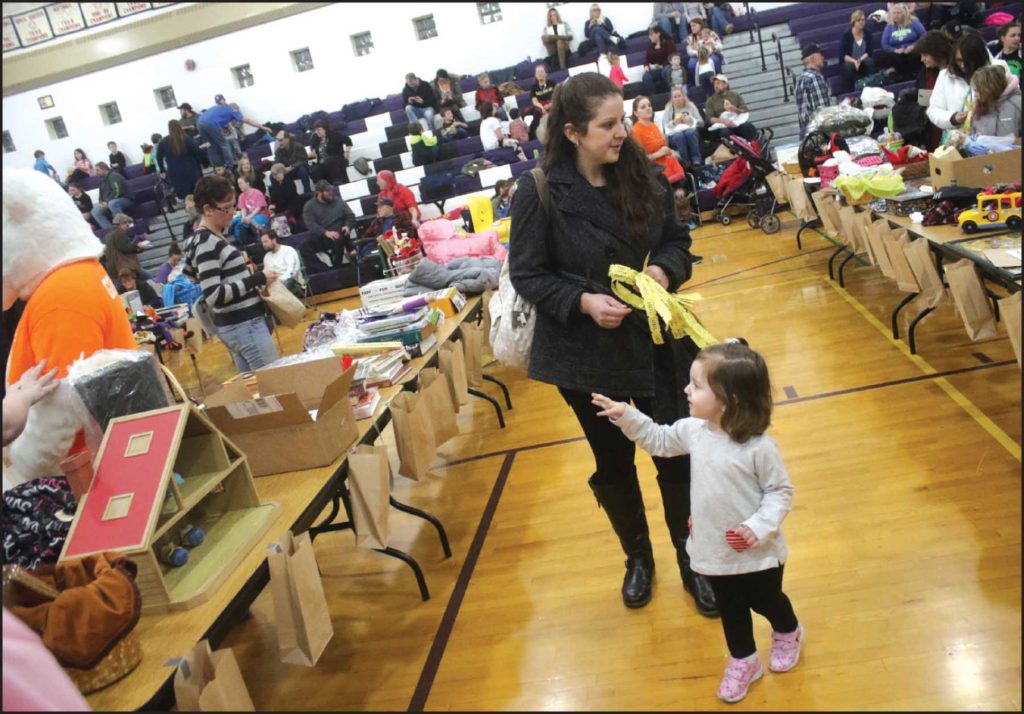 Ava Brockert, 2, and her mother Kali, Milford, look for prizes to be won at the annual Goodyear Lake Polar Bear Jump’s Chinese auction on Sunday, Jan. 27 at Milford Central School.  Below, Polar Bear Jump organizer Jamie Waters mans the ticket booth alongside Devin Kiser, Milford. All the money raised from the auction will go to help this year’s Polar Bear Jump recipients. 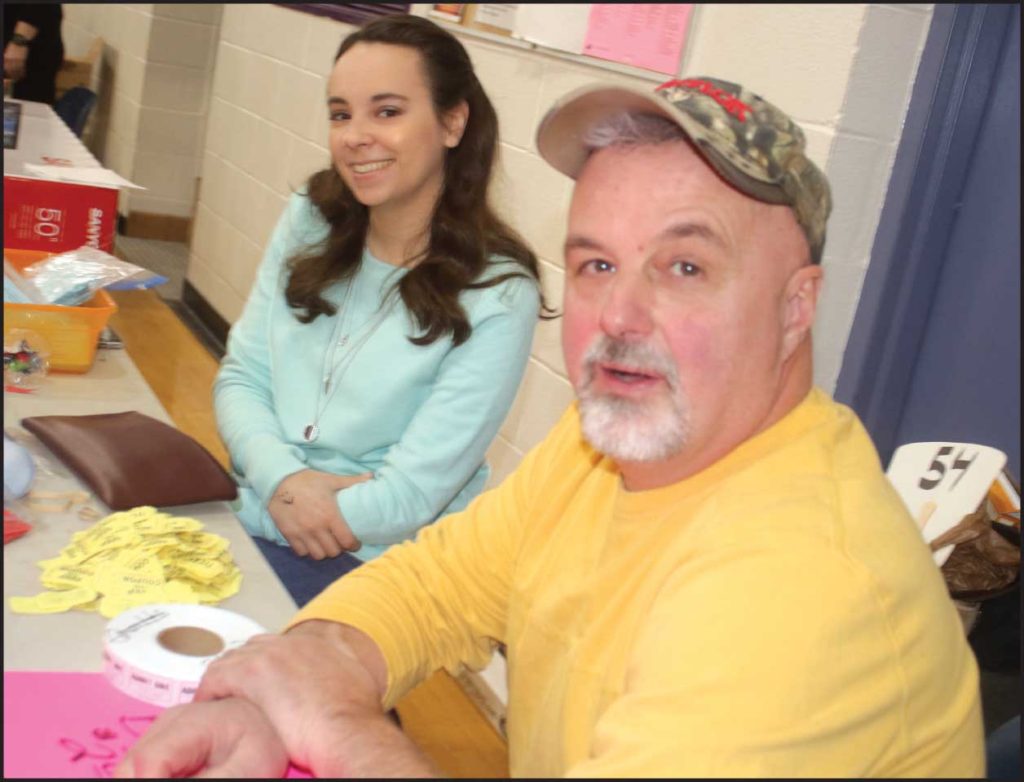 COOPERSTOWN – Kenneth Kellerman, a 90-year-old resident of Cooperstown Center, has found his calling.
Calling Bingo. A Cooperstown native, Kellerman has been at Cooperstown Center for over a year, but hadn’t been participating in many activities. Rose sat down with him to look over offerings he might be interested in, and when she told him about Bingo, he requested to call, as he had done at another facility.  When she said he could, he agreed to start attending Bingo, and has attended games weekly to call. 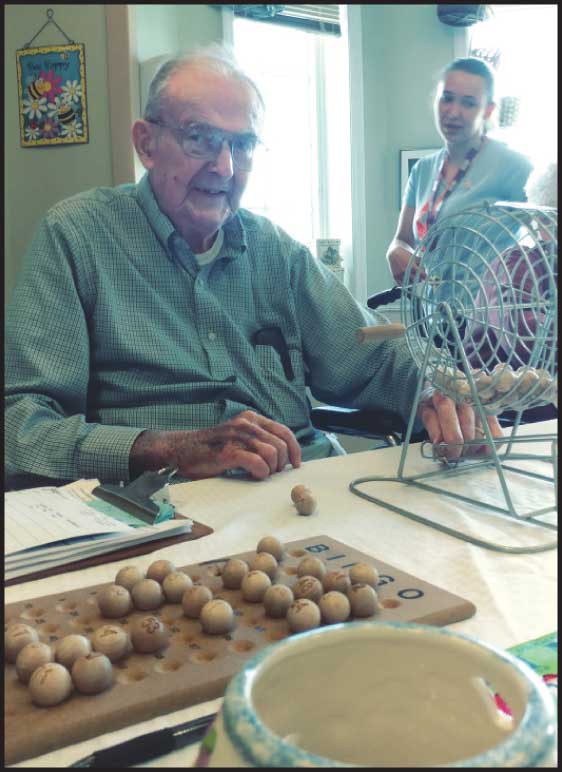 MILFORD CENTER – This year, the jumpers at the 24th annual Goodyear Lake Polar Bear Jump will be taking the plunge on Saturday, Feb. 16 to help two of their own.
Christina Freeland, a longtime volunteer for the annual event, was recently diagnosed with HyperEosinophilia Syndrome, a very rare blood disease that affects the immune system and all vital organs.
Complications from the disease and treatment, including sepsis, kept her at Bassett Hospital for most of 2018, and continued complications and side effects make daily tasks, including walking, difficult.
Another longtime volunteer, Jason Ogden, a retired New York City police officer and a first responder on 9/11 was diagnosed with Renal Cell Carcinoma (kidney cancer) in April 2017, had his left kidney removed. But the cancer spread to his lungs, liver and spine, and he is currently going through chemo and radiation treatments.

END_OF_DOCUMENT_TOKEN_TO_BE_REPLACED

DOZENS PLUNGE FOR GOOD CAUSE

END_OF_DOCUMENT_TOKEN_TO_BE_REPLACED 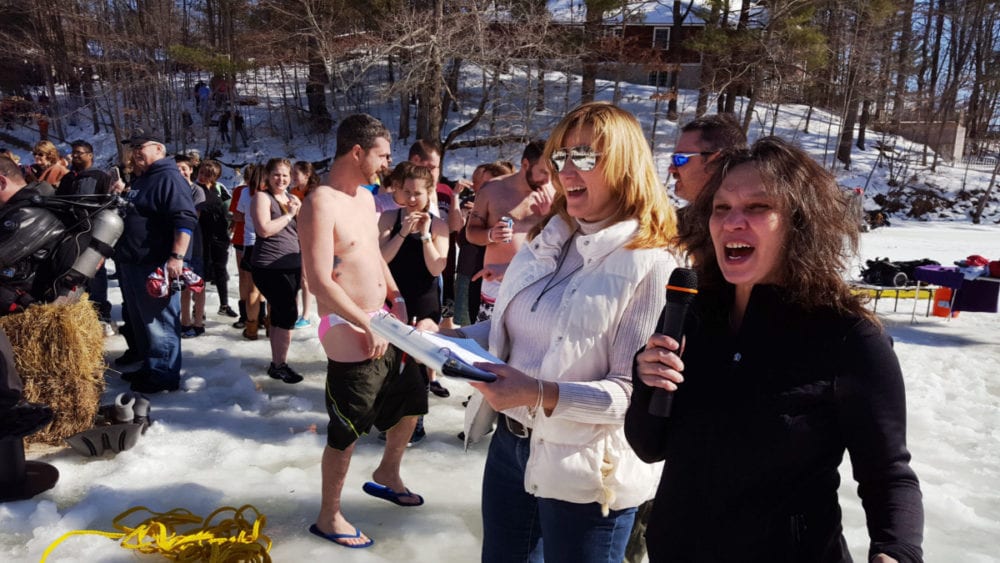 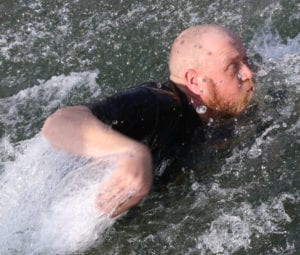 For the first time in a long time, the water was colder than the air at the 21st annual Polar Bear Jump at Goodyear Lake this afternoon. Under the watchful eyes of the state police Troop C Dive Team, over 230 jumpers braved icy water to help raise money to help ten local recipients . Above, event organizer Brenda Waters, Milford, and Jay Murphy, Oneonta, call the jumpers out onto the ice to line up before taking the plunge.  Left, Christopher Vun swims as fast as he can towards the ladder out of the lake. (Ian Austin/AllOTSEGO.com)

END_OF_DOCUMENT_TOKEN_TO_BE_REPLACED

GOODYEAR LAKE – Jamie Waters was fishing on Goodyear Lake this weekend, and reports the ice is 8 inches thick, assuring the annual Polar Bear Jump will proceed normally on Saturday, Feb. 20.

Waters, who, with wife Brenda, founded the event 20 years ago and continues to organize it, reminds fans the Chinese auction to benefit the jump is this Sunday, Jan. 31, at Milford Central School.  The auction begins at 12:30 and the drawing is at 2:30.