“We didn’t know how many people would be here,” she said. “But there were a lot of people waiting!”

And it was worth the wait.

The bridal shop was offering its first “Bag O’Bargains” sale as part of Marry Mingle After-Party to the Foothills event.

The rules were simple – buy a tote bag for $5 at the annual Wedding Expo, and at the party everything you can fit inside is $99.

“If you can get a wedding dress in there, it’s yours!” said Rainbow End’s owner Norah Doyle. “The bags are big, so you really can fit a lot in there.”

Seventy-five wedding dresses were placed on the bag-eligible rack, as well as dresses for bridesmaids and mothers-of-the-bride.  There were also prom and other formal gowns, and tuxedos, shoes, veils, and jewelry.

“I was inspired by other bridal shops in my network,” said Doyle. “Someone had done it as a Black Friday special, but I thought it would be perfect for after the wedding show, and I asked if I could steal her idea!”

Additionally, more than 100 gowns not eligible for the bag sale were marked down to $99-$199. “It’s a great way to clear out inventory and make room for the new designs,” she said.

Within the first half-hour of the Wedding Expo, Doyle had already sold a dozen bags, and by the end of the show, had almost sold out. “We had such a positive reaction at Foothills,” she said. “I didn’t know how many bags to bring, but I only came back with five.”

The annual Wedding Expo drew more than 200 registered brides and their wedding parties to the atrium. “There were a whole bunch of new vendors and venues,” said Geoff Doyle, operations manager. “Ailish Floral, August Lodge, Stonewall Events and Creekside Station were all new this year.”

And some vendors were even looking ahead to after the Big Day. “Keller Williams called and asked if it made sense for them to set up a table,” he said. “They said that after you get married, the next big step is to buy a house and have a baby, and they wanted to be the buy-the-house part!”

And the brides were all-too-happy to show off their packing skills in an unspoken contest to see who could get the most for their money.

Though she had already purchased her wedding dress from Rainbow’s End, Missy White still had a few things to pick up for her big day. “I got a veil, a headband and a cake cutter, as well as my rehearsal dress, three dresses for other weddings and events,” she said. “I’m planning ahead!”

Other brides, who had already bought their wedding gowns, stocked up on accessories. “I bought a party dress, padded hangers for my bridesmaids’ dresses, slippers and necklaces,” said Marisa Gray. “We went to the expo first, and it’s a really nice chance to spend time with my future mother-in-law.”

“This is such a great shop,” added her future Mother-in-Law, Ann Marie Deforest.

And some brides didn’t stop at one bag. “I’ve got six dresses over two bags,” said Caitlin Cole. “Plus my veil and a belt.”

The event also featured food, games, a selfie station and models showing off some of this year’s new gowns – in case you didn’t find your dress on the racks.

But if you missed out, worry not – Doyle plans to hold another one. “People had a really good time,” she said.

“It takes awhile to restock, but who knows – maybe I’ll have the next one on Black Friday!” 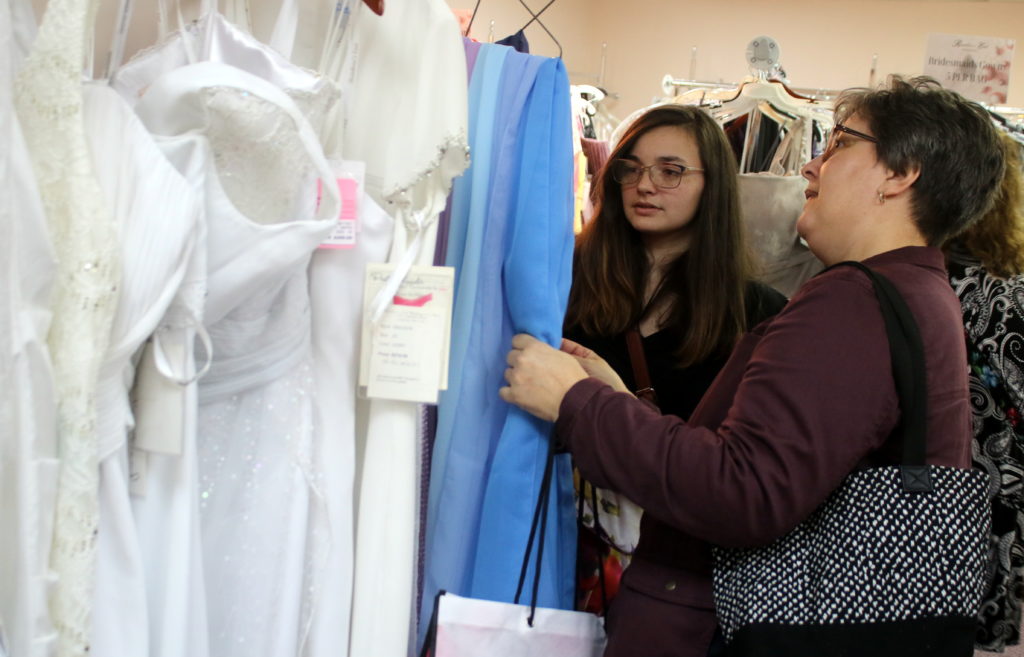 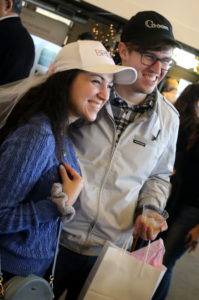 Over 250 brides, grooms and their families came to the 2019 Bridal Expo this afternoon in the atrium of Foothills Performing Arts Center. Guest like Danielle Dobitsch and Tim Maguire, Walton, at right, sampled cake, BBQ and hors d’oeuvres as they spoke with DJ’s, wedding vendors, photographers and more. Afterwards, brides like Marisa Gray, above, Unadilla, who was spending some quality time with her future mother-in-law Ann Marie DeForest, made her way to the Rainbow’s End After Party to try on dresses and partake in the Bag o’ Bargains event, where they could fill a bag with as much wedding attire as possible for only $100. (Ian Austin/AllOTSEGO.com

END_OF_DOCUMENT_TOKEN_TO_BE_REPLACED

The brides shouldn’t have all the fun, says Norah Doyle, owner of Rainbow’s End Weddings & More.
“The girls have been getting all the attention, while the guy just puts on a black or white tux and shows up,” she said. “But now, we’re seeing fashions catching up for the groom.”

Velvet tuxedos in “dusty rose,” jackets in silver embossed brocade, even studded shoes are taking over the industry, adding color and style to the traditional wedding wear.
“For years we’ve been getting people asking if we had velvet,” she said. “And last year, we finally got a burgundy velvet tuxedo, and it was very popular.”

But it doesn’t stop at burgundy.

“We just got in the Sarno & Son catalogue, and they have really stepped out of the box,” Doyle said. “We’re seeing celebrities wear all these great tuxes on the red carpet. Why shouldn’t it be available to the mainstream?”

The silver, white and black embossed fabrics are available for the more conservative among grooms. “There’s also colored socks and suspenders if you want to be a little more discreet,” she said. “Or how about crazy footwear, like gold glitter shoes?”

But for the daring, there’s the floral suede or the psychedelic paisley “Hendrix” tuxedo jackets. “I think it’s great to step outside the basic black and white,” she said.

And if you’re a little young to get married, don’t worry – the tuxes are also available for prom! “Prom kids love to assert their independence,” said Doyle. “Every year, someone asks for the orange and blue ‘Dumb & Dumber’ tuxes!”

The colored dress and shoe trend has died out for the bride, Doyle said, but the bridesmaids have an opportunity to match the groom, bringing the whole look together.

“Bridesmaids don’t even have to wear matching dresses anymore,” she said.

The color trend has moved beyond clothing.

Florists such as Mohican Flowers in Cooperstown or Coddington’s Florist in Oneonta can offer bright blooms, and Sunrise Catering’s Janet Hurley-Quackenbush said there’s plenty of bright – and seasonal! – offerings for the buffet table as well.

“Brides want colorful foods that match the season,” she said. “That means they’re locally sourced, and they’re healthier for you.”

A winter bride might get roasted veggie terrine with purple potatoes and bright orange sweet potatoes, while a summer bride might want their Superfood Salsa, with edamame, tri-colored peppers and tri-colored heirloom tomatoes, or, brighter still, their Rainbow Fruit Salad.

“We start with some red raspberries, then orange mango, yellow pineapple, green kiwi, blueberries and deep violet with grapes and blackberries,” Hurley-Quakenbush said. “It’s so pretty.”

Presentation is also important, and a quick way to brighten up a boring table. “A lot of brides like greenery, so we’ll bring fresh greens and colorful flowers to decorate with,” she said. “We can even do edible orchids on the side of the serving plate!”

And Lynn Briggs of Batter Up, (formerly Marjorie Landers Specialty Cakes) takes fruit to a whole new level on the wedding cake. “Lately we’ve been doing gilded fruit,” she said. “We use an edible gold powder, it gives it a very elegant look.”

She’s also been experimenting with hand-painting cakes. “We did a cake that we painted a barn and sunflowers on,” she said. “It’s a great way to personalize your cake.”