COOPERSTOWN — Dylan Robinson was sentenced to 20 years to life at the Otsego County Courthouse on Monday, Oct. 4, for the murder of his father, Kenneth Robinson, during a botched 2019 robbery attempt for marijuana and money.

During sentencing, Otsego County Judge John Lambert said Robinson made “poor decisions in your young life” and noted Dylan smoked marijuana and alcohol daily and hung out with the wrong crowd. END_OF_DOCUMENT_TOKEN_TO_BE_REPLACED

Justice Must Be Done, And SEEN To Be Done

Justice Must Be Done,
And SEEN To Be Done

The truism, “not only must Justice be done; it must also be seen to be done” – actually, it’s a famed quote from a 1924 British legal case – should apply to court proceedings and – if credibility is to be maintained – to democratic government generally.
With intent interest, the citizens of Otsego County have observed the wheels of justice turn since Memorial Day Weekend 2016, after it surfaced that a resident of Focus Otsego, identified only as M.P., had been left sitting in a chair, largely untended, for 41 hours.
In the subsequent months, four aides and LPNs responsible for M.P.’s care faced criminal charges and were convicted. The state Attorney General’s Office then took up the case, and brought nine charges against two top executives at Focus Healthcare, the Rockland County corporation that owned former county nursing home in Index, Town of Hartwick.
The Focus CEO, Joseph Zupnik, and the financial officer, Daniel Herman, were found guilty of one count of neglect, a misdemeanor, on Sept. 12 in Otsego Town Court. On Oct. 10, Town Justice Gary Kuch fined each of them $1,000 and sentenced each to 250 hours of community service. (The state has also fined the men $1 million, which they will split.)
•
So far, the proceedings have been transparent. Now, it appears the public is limited to what it can learn about the final step – how and where the 250 hours will be served.
The defendants’ lawyers asked that the men fulfill their obligation near their homes, Zupnik in Rockland County, where he is an EMT, and Herman in New Jersey.

The attorney general’s prosecutor, Kathleen Boland, argued the responsibility should be fulfilled in Otsego County. Judge Kuch sagely observed: “Doing community service at something you love doing – it doesn’t make any sense to me.”
However, he noted court rules prevent him from even making a recommendation. That decision is now in the hands of Alternatives to Incarceration, which has been administered under contract with the county since April 2011 by the Catholic Charities chapter, based in Oneonta.
The director, Ameen Aswad, will immediately tell you he can’t talk about specific cases, but he said that, generally, he assigns defendants referred to him to tasks within the county. The exception can come in cases where a guilty party was visiting for a short period from somewhere far away.
The nursing home’s Family Council has expressed no preference about where the community service should be done, according to its secretary, Bill Hayes.
In a letter to Kuch, Hayes and his wife, Betsy, Family Council chair, urge the men serve their time in “a residential facility’s laundry room, processing soiled garments and the equivalent of the ubiquitous brown washcloths they ordered for residents’ personal hygiene.” However, Bill Hayes said the couple has no firm opinion where the service should be, either.
Here’s another view: The case occurred in Otsego County; the community service should be done in Otsego County. Justice that can’t be observed is justice taken on faith. Is that good enough?
•
Be that as it may, Aswad said that Alternatives to Incarceration – it is overseen by a 19-person advisory board that includes police, judges, people from community services agencies, even a representative of the college – hasn’t made public what service culprits are required to perform or where.
The Committee on Open Government, which provides advice on the state’s Freedom of Information Law, says that court records are specifically exempt from FOIL. But if, in fact, Alternatives to Incarceration is a county agency – like, for instance, the probation department – it would be subject to FOIL.
There’s no reason why it should get to that.
There are differences of opinion on Zupnik and Herman’s community service. Given the high profile and emotions excited by M.P.’s case, it might make sense – and this may be argued otherwise, too – to allow the culprits to fulfill their obligation without publicity.
This is certain: When it’s over, there should a public accounting. The Alternatives to Incarceration board owes that to the public, for its own credibility if nothing else.
Not only must justice be done; it must also be seen to be done.

It’s pretty clear to everyone by now that the sale of Otsego Manor in Jan. 27, 2014, was a mistake.
That was punctuated with numerous exclamation marks Wednesday, Sept. 12, when Focus CEO Joseph Zupnik and his chief financial executive, Daniel Herman, pleaded guilty before Otsego Town Justice Gary Kuch in the Fly Creek courtroom.

Under a plea agreement, Zupnik and Herman admitted to only one of the eight counts against them, one involving patient M.P., left in a chair for 41 hours over Labor Day Weekend 2016. The specifics, as detailed by the Attorney General’s Office, appear at right.
More serious, in that death resulted, may have been the count involving Robert Banta, former longtime county Soil & Water 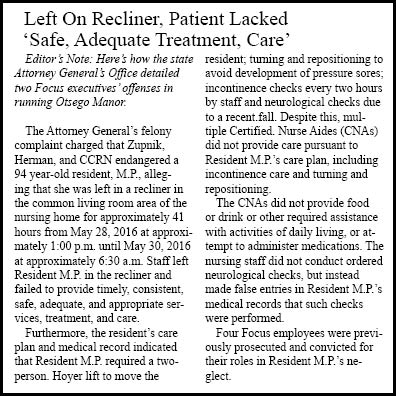 Conservation District chairman, so admired that the district’s headquarters on Route 33 is named in his honor. Admitted to Focus, he fell twice the first night there, and died at Bassett Hospital a few days later.
Some may wish the penalties were harsher – avoiding jail time by their guilty pleas, Zupnik and Herman will be sentenced Oct. 10 to a term of community service, plus fines and expulsion from administering nursing homes that get federal Medicaid funding. Further, these criminal convictions should have nursing home owners who are inclined to cut corners to think again.
Still, should the responsibility for the Focus fiasco – the widely recognized deterioration of care for some of our county’s most vulnerable citizens – be left at that?
•

Retired banker Bill Dornburgh, a member of the county Health Facilities Corp. set up by the county Board of Representatives to shelter itself from attempts to block Otsego Manor’s sale, recalls telling Zupnik that the sale price – $18.5 million – was too high, that Focus could never cover its investment.
Dornburgh voted nay on the sale to Focus. So did two other members of the Health Facilities Corp. – Dr. Don Pollock, the retired Bassett physician, and Carol Kirkey, whose husband Terry passed away at what was still Otsego Manor in February 2013.
But the four others voted aye: county Reps. Kay Stuligross, Democrat, and Don Lindberg, Republican; Kim Muller, former Oneonta mayor and, until the end of this month, chair of the county Democratic Party; and Oneonta contractor Rick Eastman. They are certainly public-spirited citizens to take on a thankless job at no remuneration; nonetheless, they must take some responsibility for what turned out to be the wrong decision, predictably so. Dornburgh was right.
Was there simply no corporation or institution in our vast United States of America capable of effectively administering our county nursing home?
•
On May 15, 2013, the county representatives voted unanimously for the creation of the Health Facilities Corp., which allowed them to wash their hands of the 4-3 vote to sell Otsego Manor to Focus the following Jan. 27. Shouldn’t those men and women bear some responsibility for the eventual outcome, too?
Most of the county reps then have now moved on; the two most directly involved, Stuligross to retirement near Philadelphia, and Lindberg to election as Worcester town supervisor.
Likewise, Republicans Jim Powers, Pauline Koren and the late Betty Ann Schwerd have left the board, as have Democrats Rich Murphy, since passed away, and Beth Rosenthal, John Kosmer and Linda Rowinski.
Three remain in office today: Republicans Ed Frazier and Kathy Clark, and Democrat Gary Koutnik.
It’s been noted here before that the very nature of the Otsego County Board of Representatives – 14 members, elected by a couple of hundred people from individual districts, yet making decisions for all of us – shelters individual reps from accountability.
You can snub your nose at the 60,636 of us as long as you keep the few hundred neighbors in your camp.
The decision to sell the Manor affected all of us; yet no one – except, thankfully, Zupnik and Herman – have paid any price. This is one reason why a county executive is being considered: to centralize accountability, and thus, responsibility – blame AND credit.
Now, that barely exists.
Still, Frazier, Clark and Koutnik are up for reelection next year. If the electoral process is working at all in Otsego County, they should be challenged, and the challenger should ask: Who lost Otsego Manor?