In Baroque Revival In U.S.

SPRINGFIELD CENTER – Sarah Cunningham Sumner, a noted violinist involved in the revival of Baroque music in the United States in the 1970s, passed away Aug. 26, 2020, at the Cooperstown Center for Rehabilitation & Nursing.

It was after World War II, and she taught music at a camp in France for war orphans. Her fellow teachers, who were from France, Italy, England and the U.S., became her lifelong friends. One of them, Caroline Manning, became her sister-in-law, marrying her brother, Frederic (Ty) Cunningham.

END_OF_DOCUMENT_TOKEN_TO_BE_REPLACED

She also owned and operated McCredy’s Grocery, a family business, along with her husband Clyde. She gave piano lessons for over 40 years, and hosted many recitals in Springfield Center.

END_OF_DOCUMENT_TOKEN_TO_BE_REPLACED

Taught Trades At BOCES For 23 Years

SPRINGFIELD – Williams “Bill” A. Rathbun, IV, 59, who taught manual trades at BOCES for almost a quarter-century, passed away Thursday morning, Dec. 26, 2019, at Bassett Hospital, surrounded by his family.

Bill was born on Oct. 26, 1960, in Cooperstown, the son of Williams A. Rathbun III and Virginia (Marr) Rathbun of Springfield. He was raised in the Springfield area and graduated from the former Springfield High School in the Class of 1980.

END_OF_DOCUMENT_TOKEN_TO_BE_REPLACED

Past Girl-Scout, 4-H Leader In Springfield

SPRINGFIELD – Phyllis  Walrath Collins, 94, active in the community as a past Girl Scout and 4-H leader, passed away peacefully on Wednesday morning, Oct. 16, 2019, at home in the arms of her loving daughter Pat.

She was born on Dec. 11, 1924 in Schenectady, a daughter of the late Dwight and Florence Matthews Walrath.  Raised in Schenectady and Jordanville, she graduated from Van Hornesville Central School with the Class of 1942.

END_OF_DOCUMENT_TOKEN_TO_BE_REPLACED

By JENNIFER HILL – Special to AllOTSEGO.com

SPRINGFIELD CENTER – The buzz from hemp is an economic one and Otsego County is starting to get it.

Last spring, the Canadian cannabis company, Canopy Growth, bought Stitzel’s Waterpoint Farm, which closed its dairy operations in 2017, and this fall will harvest its first hemp crop – 300 acres – worth – in mid-October.

The hemp will be dried and milled at the farm, then sent off-site to be processed for its cannabinoid or CBD oil – the non-hallucinogenic chemical used for numerous medical conditions and ailments in mid-October.

END_OF_DOCUMENT_TOKEN_TO_BE_REPLACED

By JENNIFER HILL • Special to ALLOTSEGO.com

By JENNIFER HILL • Special to AllOTSEGO.com

The buzz from hemp is an economic one and Otsego County is starting to get it.

Last spring, the Canadian cannabis company, Canopy Growth, bought Stitzel’s Waterpoint Farm, which closed its dairy operations in 2017, and this fall will harvest its first hemp crop – 300 acres’ worth – in mid-October.

The hemp will be dried and milled at the farm, then sent off-site to be processed for its cannabinoid or CBD oil, a product sold at places like CBDVillage. It’s a non-hallucinogenic chemical used for numerous medical conditions and ailments in mid-October.

If you do not live locally, buying wholesale CBD online at its highest quality would be a better fit for you.

With U.S. sales of CBD products projected to generate about $2 billion in sales by 2022, industrial hemp may play a role in reversing Otsego County’s economic decline.

“Hemp is a transformative crop for many reasons,” said Branson Skinner, Canopy Growth’s farm manager for New York State, who works out of Waterpoint. “It uses fewer resources than other crops, especially cotton, and you can get a greater biomass for paper than trees.”

According to Canopy Growth’s website, in 2014 it became the first cannabis company in North America to be publicly traded, and recently was listed on the New York Stock Exchange. This website could be making use of the best web hosting for marijuana, as it can be difficult for these businesses to find hosts due to the nature of their product.

It provides a full range of cannabis products, from hemp and medical marijuana to “adult-use cannabis.” In New York, the state Legislature failed to legalize marijuana, but the Democratic leadership plans to try again in the next session.

Meanwhile, there’s hemp: a strain of cannabis with much lower concentrations of tetrahydrocannabinol (THC) – the chemical that gives users the high – 0.3 percent versus 2 to 19 percent in cannabis used for medical and recreational use.

Until Congress passed the Agriculture Improvement Act of 2018 last December, which legalized the growing of hemp nationwide, farmers could only grow hemp in states with pilot programs.

“The 2018 Farm Bill allowed money to be moved legally, for banks to accept money from hemp sales,” Skinner said. “And that opened up the whole industry.”

Hemp plants cannot have THC concentration above .3 percent and farmers must regularly test hemp to ensure the THC stays below that level, which can make growing the crop labor-intensive.

“If you have one plant that tests above .3 percent, you have to throw out the entire field of hemp,” said Janice Degni, Cornell Cooperative Extension field crop expert.

Skinner said they had not detected any THC in Waterpoint’s hemp when testing it. The hemp varieties used at the farm are “CBD-heavy” ones, and CBD neutralizes THC.

“You could smoke this whole field and not get high,” he asserted. The same goes for other medicinal CBD plants from other companies such as TONIC CBD flower, for example, these flowers and products aren’t for the purpose of getting you stoned, CBD is a medicine meant to be used in the treatment of many different ailments.

CBD hemp can be labor-intensive as well because CBD only occurs in the female plants’ flowers, so hemp growers have to check for male plants in the field and clear them out.

While Skinner attests no male plants have grown at Waterpoint, he spoke of another phenomenon they have to watch out for.

“Some female plants will become hermaphrodites by pollenating themselves if they ‘sense’ male plants aren’t around or they’ve been stressed by, say, too much water,” Skinner explained. “So, we have to look for and remove pollen sacs from them.”

Skinner said “part of Canopy Growth’s mission is to support small farmers and communities, to improve local economies, and really, to transform agriculture.”

That transformation has already begun at Waterpoint Farm, with the conversion of the farm’s dairy structures into ones that will be used for the hemp.

“Canopy Growth purchased Waterpoint not just because it had the good land for hemp, but it also had the housing, electrical infrastructure, buildings, diesel tanks,” Skinner said. “We weren’t just buying 1,200 acres of land.”

An old bunker silo is already being converted, and other buildings and silos will be repurposed in the next 2-3 years, for storing, drying and milling the hemp. The dried hemp is then sent to a processing plant for CBD extraction.

Waterpoint has also gone from having one employee to about 20 during the peak of cultivating the hemp over the summer. There are now six full-time employees and eight temporary/seasonal ones. With plans to double the production of hemp next summer – from 300 to 600 acres – the farm will be hiring more.

And Waterpoint could become an agricultural “hub” for the region and boost dairy farmers, Skinner said.

“We have a network of smaller farms near Plattsburgh who contract with us,” he explained. “We provide them technical support and a guaranteed market for hemp they grow on their farms. It could give dairy farmers a major shot in the arm.”

Such a farm network has not formed in Otsego County yet, but Skinner said after the October harvest, he will begin developing one.

SPRINGFIELD CENTER – Anne Cromartie Reynolds, 98, who built a house on Otsego Lake with her husband, the late John M. Reynolds, passed away on June 5, 2019.

She was born in Garland, N.C. on Aug. 29, 1921 to Dr. Robert Samuel Cromartie and Mary Blanche Jester. She went to Queens College in Charlotte, N.C. for 2 years and then went on to graduate from the University of North Carolina in Chapel Hill in 1942. Anne worked as a teacher until she was old enough to join the Red Cross, which sent her to Simmons College in Boston for a Masters in Social Work.

END_OF_DOCUMENT_TOKEN_TO_BE_REPLACED

Whom Do We Trust?

Whom Do We Trust?

To the Editor:
Re Mike Zagata’s March 14 remarks about socialism, the National Debt, and energy:

• Our health, education and welfare can be entrusted to our legislatures and executives whom we vote in or out. Or they can be run by big corporations over which we have almost no control.

• Social security, our public schools and Medicare may be socialistic, but whatever we call them, they serve us pretty well.

• Yes, the national debt is much too high, but Reagan and Trump raised it and Clinton lowered it. And two big reasons it’s so high are excess military spending and reduced tax income from the very rich.

• If we do need more nuclear power, let it be under professional … not for-profit management!

She was born on March 6, 1944, in Cooperstown, a daughter of the late Charles and Margaret Galusha Vickerson. A lifelong area resident, she was a graduate of Van Hornesville High School.

END_OF_DOCUMENT_TOKEN_TO_BE_REPLACED

SPRINGFIELD CENTER – Jean Bowen Gerhartz, 94, passed away peacefully Friday, Aug. 3, 2018, at St. John’s in Rochester with her family by her side.

Jean was born Nov. 7, 1923, in Cooperstown, one of three daughters of Francis and Lena (Hood) Bowen.

END_OF_DOCUMENT_TOKEN_TO_BE_REPLACED

He was born in Cooperstown, the son of Stewart and Kathy Coveny David.

END_OF_DOCUMENT_TOKEN_TO_BE_REPLACED

Of Springfield 4th Of July Parade 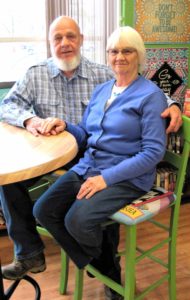 “The Dorns are the sort of people that bring soup to ailing friends, help out the elderly with small repairs, and give rides to their Amish neighbors as a matter of course,” the committee said in its announcement.

During the three month renovation of the Springfield Library last year, the Dorns volunteered so much time moving books and bookcases that Town Librarian Echo Weller joked about bringing in cots for them.

According to Beverly Guilfoyle , Clerk of Session at the First Presbyterian Church of Springfield: “If they hear of something at church that needs to be done, the next thing you know, it’s magically done (Dorn done).”

END_OF_DOCUMENT_TOKEN_TO_BE_REPLACED

SPRINGFIELD CENTER – Betty Linney Bosc, 88, who spent her career as an EEG technician and head secretary at Bassett Hospital, passed away peacefully with her family by her side on Thursday evening, Nov. 9, 2017, at Focus Otsego in Cooperstown.

END_OF_DOCUMENT_TOKEN_TO_BE_REPLACED

SPRINGFIELD CENTER – Leland Arthur Harvey, 90, a farmer, contractor and the Glimmerglass Opera’s first maintenance director, passed away on Aug. 30, 2017, at home with family by his side.

Leland was born on Aug. 5, 1927, in Salt Springville to Arthur William and Bertha Ripple Harvey.

Leland worked his family farm in Salt Springville until 1956, then built homes with C. David Smith as a skilled carpenter, plumber and electrician.  He joined the  Glimmerglass Opera when it opened as its present site.