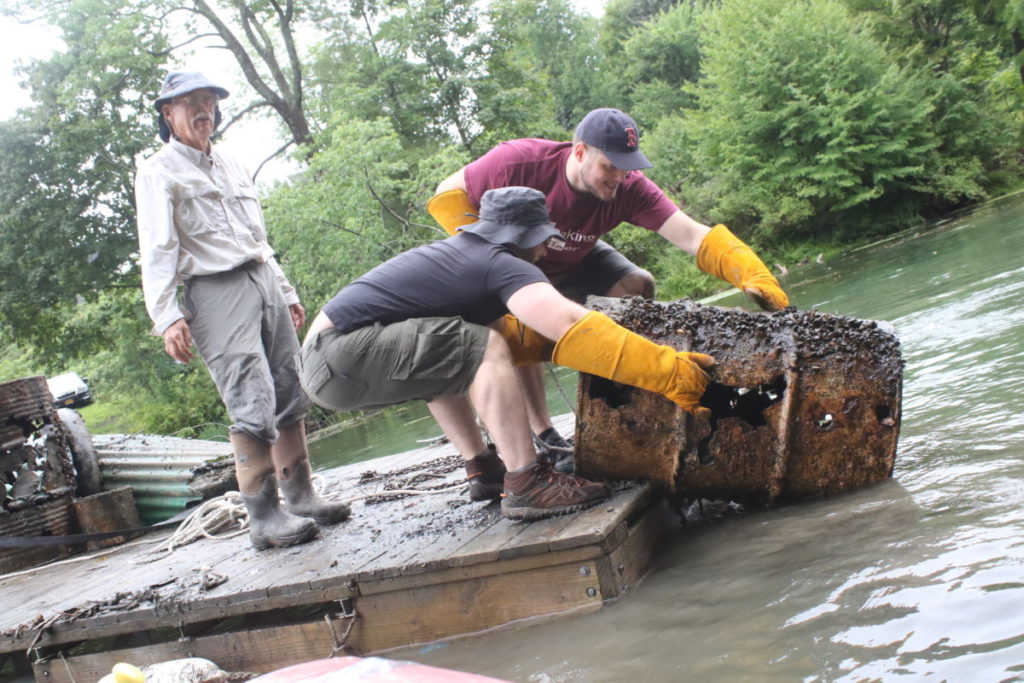 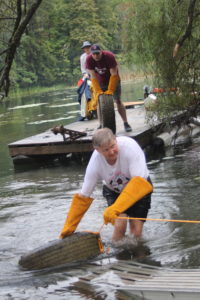 Butch Weir, Cooperstown, left, looks on as Matt Chisdock and Doug Perry haul an old 50-gallon drums aboard the Otsego Sailing Club work barge this morning during a Susquehanna River clean-up behind Bassett Hospital. The clean-up was a community service project headed by the Cooperstown Lions Club with help from the OCCA and the SUNY Biological Field Station volunteer dive team. At right, event organizer John Rowley brings ashore the first of over 25 tires retrieved. Teams also brought up scores of bottles, barrels, pipes, a feeding trough and other refuse from the floor of the river. Neighbors who use the waterway applauded their work and even helped in the effort. (Ian Austin/AllOTSEGO.com)

In July, Colin Lassiter, 6, was fishing off Council Rock with his dad and sister, and he discovered dozens of Craspedacusta sowerbyi, a fresh-water jellyfish, in James Fenimore Cooper’s Glimmerglass.

“I thought they were some sort of weird bubble,” the boy said.

Since, two other “credible reports” have been received by SUNY Oneonta’s Biological Field Station, according to Paul Lord, who teaches at SUNY and the BFS, and he has raised the alarm about a new invasive in Otsego Lake.

Early this month, Chip Northrup, Lake Street, spotted two while snorkeling between Fairy Spring and Kingfisher Tower. “I was shocked,” he recounted. “I was dumbfounded. I thought I was back in The Bahamas.”

Lord’s trifecta came in about the same time, when Martin and Meg Tillapaugh, at their camp across the lake near Five Mile Point, observed seagulls flocking just off their dock. On inspection, they spotted the source of the excitement: A single little jellyfish.

The little invasives are harmless, Dr. Lassiter, who on arriving home with Colin and Chloe researched them on the Internet. (Chloe immediately drew a picture.) As with their sea-going counterparts, they have venom in their tentacles, but in too small amounts to affect humans, he said.

Lord and the BFS volunteer dive team immediately took to the water but failed to spot any examples, he believes, since the weather turned cold.

Nonetheless, the BFS issued an alert for swimmers, if they if they spot any of the “dime to quarter coin sized” novelties, to put them in a waterproof container, place it in the refrigerator, and contact Lord (paul.lord@oneonta.edu or 435-4989) or the station (547-8778).

Both Lord and Northrup observed that, since the spottings were on different sides of the lake and five miles apart, it is likely the jellyfish are already present throughout the lake.

“How did they get into the lake?” asked Lord. “That’s what concerns me.”

In recent years, there’s been a push on to inspect boats and fishermen’s bait buckets at public launching sites to ensure they are clean and dry. Nonetheless, zebra mussels entered the lake a half-dozen years ago, and other invasives as well.

“We have some obviously gaping holes,” said Lord. Some hotels charge $5 or $10 to let boats launch off their properties. Glimmerglass State Park has no inspections. Some kayakers simply enter the water where they will. The state Office of Parks, Recreation & Historic Preservation has declined to participate in inspections.

The main source of invasives is the Great Lakes, where bilge is dropped from ocean-going vessels from around the world. There are more than 200 invasives in those lakes, Lord said.

The Otsego County Conservation Association recently proposed a local boat inspection law to the county Board of Representatives, and this may give that idea some momentum, the researcher said. Meanwhile, he is alerting CRISP – the Catskill Region Invasive Species Partnership – to see what additional role they might play locally.

The SUNY Oneonta Biological Field Station’s research vessel, Anondontoides,which will serve as a committee barge of judges and parade officials, will be moored off Three Mile Point.