EDITORIAL FROM THIS WEEK’S

The Center Will Hold

Editor’s Note:  Below is the introduction that set the stage for this week’s editorials:  Endorsing Democrats Andrew Cuomo, Bill Magee and Chad McEvoy, and Republicans John Faso, Jim Seward and Richard Devlin in the Nov. 6 election.  Reasons for our endorsements are detailed in this week’s Hometown Oneonta & Freeman’s Journal, available on newsstands today. Click here and read the full report that informed the introduction below, “The Hidden Tribes of America,” which finds, despite the surface divisiveness we hear around us, most of us are people of good will, willing to listen and to seek a middle way, the basis for our democracy at its most successful. 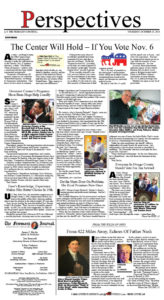 As voters – in Otsego County, the 19th Congressional District and nationally – struggle to make the right decision in the Tuesday, Nov. 6, midterm elections, a study, “The Hidden Tribes of America,” surfaces with a conclusion that has been widely commented on nationally:

“A majority of Americans (61 percent), whom we’ve called the ‘Exhausted Majority,’ are fed up by Americans’ polarization. They know we have more in common than that which divides us: our belief in freedom, equality and the pursuit of the American Dream. They share a deep sense of gratitude that they are citizens of the United States. They want us to move past our differences.”

It the past two years, those of us with that sensibility have been screamed at by two sides that, it turns out, are fringes. On the left, “Progressive Activists,” according to the study, are a mere 8 percent of the citizenry; on the right, “Devoted Conservatives” are only 6 percent.

If you consider yourself a centrist, you may believe your views will be overwhelmed at the ballot box. Not so, “Hidden Tribes” tells us; in effect, it’s the wish of a sizeable majority of Americans to find common ground.

This is by way of preamble to this newspaper’s endorsements, below, which are an effort to make recommendations based on the merits, not through any particular political prism.

Regardless of this newspaper’s endorsements, be sure to vote Nov. 6 – polls will be open 6 a.m. to 9 p.m. – and vote your conscience. You may be surprised how much you are in sync with the majority of your  fellow Americans. So vote.

As usual, these endorsement editorials appear 10 days before Election Day, to allow you to agree or disagree in next week’s Letter to the Editor columns.  Please send letters by noon Monday,
Oct. 29, to jimk@allotsego.com.