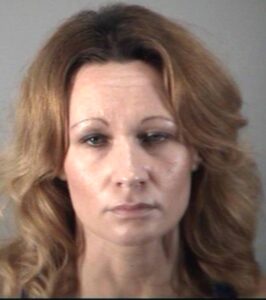 LAURENS – The wife of a Laurens man reported missing two years ago was arrested on murder charges this morning, following two years of investigations after his remains were discovered in the backyard of their home in Clermont, Fla.

In February 2018, friends requested a well-being check on him, and when Lake County Sheriff’s Deputies responded to the home at 9850 Sandy Pines Road in Clermont, they were not able to locate Michael.

According to the deputies, Laurie allegedly told them to leave her property when they asked for permission to have a cadaver dog conduct a sniff of a concrete slab that was poured around a home-made fire pit in her yard.

As the investigation progressed, a search warrant was obtained and served on the property in March 2018, at which time human remains were located, including an arm bone and clothing, buried underneath that concrete slab.

Detectives received confirmation in June 2018 that those remains were Michael Shaver’s.

The cause of death was ruled homicide. The manner of death is not yet being released.

Shaver was arrested this morning at approximately 10:25 a.m. at her residence located at 27302 Bay Avenue, Okahumpka, Fla. without incident. She has no bond.