WHEN WINTER WAS WOW! 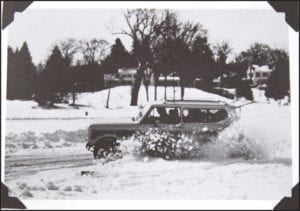 Icy Lake Was Village’s Playground In Winter Carnivals Of Yesteryear

COOPERSTOWN – If you looked out and saw cars out on Otsego Lake today, you would probably call a tow truck.
But in 1974, when Bill Waller was Cooperstown Winter Carnival chairman, it was all part of the fun.
“We had all sorts of events on the lake – Just as long as the ice was 18-inches thick,” he said.
The 52nd Winter Carnival kicks off Friday, Feb. 8
Back then, chief among the favorite activities was the annual gymkhana, where cars would race through cones across Otsego Lake’s ice.
“When we came up for the first Winter Carnival in 1969, I saw all these cars out on the ice,” said Waller. “I took my car out, but I had the wrong tires on, so I didn’t do very well.
“But Hank Phillips” – at the time, he ran Withey’s Pharmacy on Main Street – “he had this funny little Volkswagen, and he beat the pants off everyone.”
But Bill was undeterred, and he entered every year. “You would hear the ice cracking underneath the tires,” said his wife, Carol, the former Cooperstown mayor and Mohican Flowers’ proprietor.
“It was so scary!”
Phillips took a lot of trophies, until one year, a new challenger approached. “This guy pulled up in a trailer with an ice-racing Saab, complete with chisel tires,” Bill said. “The car went around that track like it was riding on rails.”
Another time, Waller looked up and saw a plane “making patterns” on the lake.
“I knew he was going to land, so I drove up to Kingfisher Tower and drove out onto the lake up next to him,” he said. “I gave him a ride into town, he had lunch and explored the carnival, then someone gave him a ride back and he took off right off the lake!”
But the lakefront fun wasn’t just for the adults. The Boy Scouts would host their Klondike Derby on the ice, racing from station to station practicing skills including building a fire and splitting wood, all for the glory of a trophy.
“We handed out so many trophies in those days,” Bill said. “We gave ribbons up to sixth or seventh place for the kids.”
And just because it was snowy didn’t mean people couldn’t enjoy a round of golf. “We’d spray paint circles in the snow and you’d have to aim your ball for that spot,” he said. “We used to have such big crowds gathered at Lakefront Park.”
This year, there will be mini-golf on Main Street, noon-4 p.m. Sunday, Feb. 11.
The park was also part of the cross-country ski racing course, where participants would race down the lake towards downtown, where the chili cook-off would be waiting to warm them up.
“If you were smart, you just went and got chili without having to ski!” said Waller.
And there were other ways to warm up as well, including $3 all-you-can-drink Budweiser – in conjunction with the Hager family, members of the Busch clan – at Redman’s. “The beer was 2 inches thick on the floor,” said Waller. “It was flowing out the door!”
But insurance concerns and warmer winters changed the landscape of the festival, and although the lake is no longer a scene of the festivities, the lip synch, the hike and the sled races still remain part of the fun, just as they did in the old days.

“The locals always enjoy it,” said Waller. “It’s our event. You go out, you see people, you have a good time.”

One year, Bill Streck did ‘Walk Like an Egyptian!’ in the lip synch,” said Carol. “Good times, good fun.”

2 thoughts on “WHEN WINTER WAS WOW!”