It once was Ruby’s and it’s still a gem

— a column from Ted Potrikus 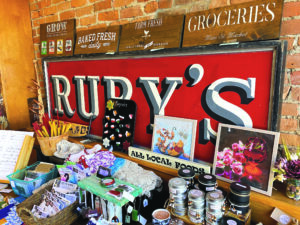 Dan Sullivan – the Town of Richfield Supervisor and co-founder of the Richfield Springs Community Food Cooperative – invited me out last week for a tour of the store on the village’s West Main Street. I had been there only a few minutes talking with Kari James, the store’s full-time manager, when the proprietors of B. Blossom Catering came in with the morning delivery of vegan lunch plates to sell there that day. I knew right away what I was buying for lunch – a kale salad topped with jerk-flavored roasted tofu.

Dan and Kari looked at the dozen-or-so containers. “Hang on,” Dan said. “Let me count these. I’ve already had a lot of calls this morning to have one set aside.”

Fortunately for my lunch plans, not all of them had been spoken for. And Dan kept getting calls. Some for Town business (a surprise visit that afternoon from Rep. Antonio Delgado’s staff) and some for the Co-op. Customers, too – Co-op members get a 10 percent discount on their freshly-made coffee and plenty of them stopped in that morning for a cup and to say hello to Dan and Kari. And Dan peeked in an adjoining room to greet a half-dozen villagers who meet there each Monday for a game of mahjong.

They really weren’t interruptions at all – I had the chance to check out the locally-sourced, locally-grown, locally-made, and/or locally-packaged food and home goods. And the coffee – Dan gets it for his store from the Utica Coffee Roasting Company – was delicious.

The Co-op has its roots in discussions Dan had with co-founder Amy Wyant dating back to 2016 that led to an October 2018 opening. Since then, the store has weathered COVID, competition, and a changing retail marketplace that sees small and independent merchants squeezed at the mercy of big companies demanding all the attention from a beleaguered supply chain.

“We had hoped for a three-fold increase in business after our first five years but we’re at only 40 percent growth,” Dan told me. Pandemic-related, for the most part, but he and the Co-op remain committed to pulling free of the grants and loans that help keep the lights on.

“We have a loyal but relatively small following of people who understand the value of locally-sourced, healthful food,” he said. “We’re staying viable as a business, meeting expenses. Otsego Now has been fabulous and we’ve had assistance from the Community Foundation of Otsego and private donors.”

Along with my lunch, I picked up a bottle of local honey (I’m getting ready for allergy season) as Dan showed me the items on offer. A tremendous selection of spices from a local distributor. Meat from seven top-quality local farmers. Hand-made products, creamery milk from one herd at a nearby farm. Local art – the store sold 14 paintings from local artists in one show. Among the challenges of running the business, Dan said keeping the store stocked is one of the fun parts.

“The supply chain as we know it just isn’t structured to accommodate anything but the big stores,” he said. “Here, a customer who wants to try the meat from a local farm can come in and buy one piece. It gives the farmers visibility.”

He’s optimistic for the popular Co-op’s future – dwindling COVID numbers bringing visitors back to the area would be a big step forward, and the Co-op just finished a successful membership meeting where “people really stepped up” to boost the store. COVID’s decline, he hopes, brings back the Co-op’s popular member-only events that in the past have included talks on everything from the Mexico border crisis to kombucha. Dan said he is looking forward to offering more educational programs, as well, focused on nutrition and dietary habits. He wants to provide healthy options for local consumers.

Before I left, I mentioned I hadn’t been in the building since its days long ago as Ruby’s Department Store. Dan pointed toward the sign that greets customers at the entrance.

“The family that owned Ruby’s came in as we were getting the building ready for the Co-op,” he said. “They were marvelous. We found the old Ruby’s sign and cleaned it up to carry the history through to what we’re doing now.”