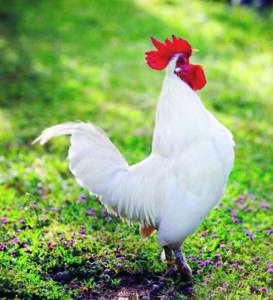 One Easter, when I was about nine years old, I bought six peeping chicks from the pet shop around the corner and secreted them under a 100-watt bulb in a cardboard box in the cellar.

“They’ll bring rats!” my aunt Edna shouted when she discovered them on a trip to the washing machine. Aunt Edna did most of the housekeeping and was always against bringing in any pets. I begged her to let me shelter them until the weather was warm enough for the chickens to live in a coop in our backyard. She reluctantly gave in, though not without a warning that if I didn’t move them in a couple of weeks, she would sweep them out of the cellar with her broom.

My chickens flourished, and within a few weeks they gave up their fluffy yellow feathers and peeping calls to take on white coats and deeper voices.

My dad told me that when the family had first moved to Brooklyn in 1919, my grandmother had raised a brood of 35 White Leghorns in a coop in our backyard. She had 10 children to feed, and the eggs, came in handy. I built a coop with wood and wire scavenged from the neighborhood. Meanwhile the young birds were eating a lot more. It soon took a week’s worth of deposit bottle money to buy feed from the poultry market.

Despite my high hopes, disappointment followed. My chickens weren’t affectionate like puppies or kittens. All they did was eat and they pecked at everything — even each other. If one got loose, which was often, it would trot around the yard in a frenzied, long-legged hysteria, trying to dodge me, the one who nursed and fed it and built its house.

By summer, all the red combs on top of the chickens’ heads were getting big, which meant they were all males. Gone was the hope that one day I’d be walking out to the coop like my grandmother with basket in hand to gather fresh eggs. However, I was determined not to lose to Aunt Edna by getting “rid of them.”

About the middle of August is when the trouble really started. I was shaken from a deep sleep by a terrible noise. It wasn’t cats yowling in the alley, or Woodlock the baker next door, home from work and fighting with his wife.

I got out of bed and went to the window. It was near morning. The sun hadn’t come up yet, but the highest tips of the willow tree were beginning to take on a golden glow. Then I heard it again, the whole sound this time. It was just like in a cartoon, a clear, full-throated “cock-a-doodle-doo!”

First one rooster, then another, and another. They seemed to be trying to out-doodledoo each other — and resurrecting all of Bensonhurst in the process. Lights went on in the apartment house next door. “What the Henry J was that!” someone shouted. I moved behind the curtain.

After breakfast, I went out to feed my chickens. Several people in the apartment house next door were looking at me, arms resting on their windowsills, perched like hawks, but no one said anything. The roosters’ combs seemed bigger.

The next morning, before daybreak, all six birds started wailing at the same time making the racket twice as loud as the day before. I lay in my bed and heard windows being slammed closed.

“Lousy chickens!” someone yelled. “They’re against the law!” Then Aunt Edna was knocking on my door to tell me the roosters woke up Uncle Dave, who had just gone to sleep after driving the night shift on a taxicab.

I tried sneaking out to the coop the next morning by walking along the fence and then the hedges, but a chorus of neighbor complaints greeted me. “You have to do something about those chickens,” called Mrs. Adleman from her ground floor window. “They woke me too,” Mrs. Esposito shouted from the second floor. “I’m notifying the Board of Health!” boomed Woodlock the baker from the top floor. “I need my sleep!”

I tried blindfolding the birds so they wouldn’t know when it was morning — but they wangled out of anything I tied around their heads. There was a tin cabinet in the shed in the corner of the backyard; it had six shelves. That night I put the roosters in the dark cabinet inside the shed with a piece of cardboard over the window. They wouldn’t see the light of day until I wanted them to.

About 5:30 the next morning, all six roosters began to crow. The noise was slightly muffled, but the metal cabinet made their calls sound like muted trumpets giving them a spiteful tone. The result was an even more annoying racket. The shouting started again: “I’m calling the police! Shut them chickens up or I’ll shoot em.”

I couldn’t understand it. Maybe there was a light leak. But, between the crowing and the neighbors’ yelling my head began to ache. Then Uncle Dave came stomping down the stairs and burst through my door with his eyes bulging and his nose almost touching mine. “Get rid of them chickens!” he growled.

Later that morning I loaded the six troublemakers into a crate I had put on my wagon. Then I made the lonely walk to the end of West Sixth Street where I sold the roosters to a bearded, white-coated man at the poultry market. I felt guilty and relieved as I left the store. Now, peace would be restored. With my empty wagon in tow I wondered why pet shops sold chickens at Easter time. Maybe it was because they had something to do with waking up.

I also wondered why bunnies got all the credit for Easter eggs. Maybe it was because they behaved and didn’t make any noise.

So, on my way home, with the money the poultry man paid me feeling warm in my pocket, I headed in the direction of a pet shop on McDonald Avenue. There was a pair of rabbits I’d had my eye on for a while. Bunnies don’t crow, I thought. What could Aunt Edna say? Having them for pets wouldn’t cause any trouble.