DC Bishop on Trump's photo-op: This was a charade

GOP senators are critical of Trump's response to unrest

Trump threatens to call in troops but unrest goes on

Philly residents protect store from looters: 'We stand with peaceful protesters,' not rioters

Many states scrambling to update hurricane plans for coronavirus

NYPD officer criticized for pointing gun at protesters was reacting after his supervisor was hit by brick: union

200 YEARS AGO
Otsego County Convictions – At the last term of the County Court held in this Village last week – John Cunningham was convicted of Grand Larceny and sentenced to imprisonment in the State Prison at hard labor, for the term of 3 years and 6 months. Jacob Vanderhoof was also convicted of the like offense and sentenced to the state prison for the term of 3 years and 6 months, at hard labor. John Stewart, petit larceny, sentenced to pay a fine of $50, and to stand committed till the fine be paid. The Grand Jury found 16 bills of Indictment at the present term. Moses Simmons, who was lodged in prison last October, for killing his father in Springfield, will doubtless have his trial in May next.
February 22, 1819

175 YEARS AGO
A correspondent states that petitions are in active circulation in some sections of this county for abolishing the Poor House System and selling the farm and buildings devoted to that object. He desires us to caution citizens to examine the question in all its bearings, before committing ourselves in its favor. Besides being of doubtful expediency on the score of humanity and benevolence, such a project, if successful before the Legislature, would necessarily cause a considerable sacrifice to the county, for it is scarcely to be presumed that the farm &c. would sell in market for more than half of the $10,500 which it has actually cost.
February 26, 1844

150 YEARS AGO
A Warning – One day last week a laboring man working on the railroad came before Esquire Wilson and stated that he came to Cooperstown with $30 in his pocket, having just been paid off. Here he indulged rather freely in the “ardent spirits” which was not customary with him. Towards evening two young fellows – who pick up a living by doing chance jobs about the place – followed him to a remote spot and there robbed him of a portion of his money. These boys, aged about 18, were promptly brought before the Justice, and the case being a clear one they made a full confession, pleaded guilty of petit larceny, and were sentenced to 90 days imprisonment in the County Jail. Had they got before Judge Sturges the chances are that they would have been sent to State Prison. In the hope that this may prove an effectual warning to them, and that as soon as released will go about some steady employment, we suppress names. This case is a warning to men to let whiskey alone, and to deposit their earnings where they will be safe – a warning also to parents who are bringing up their children in comparative idleness, instead of teaching them some useful trade or business.
February 26, 1869

125 YEARS AGO
Burning of the Normal School in Oneonta – It created a painful sensation throughout this village last Thursday evening when it became known by telephone that the Normal School building was on fire – to help subdue which the aid of the Cooperstown Fire Department was asked. The response was of course quickly given in the affirmative – but while hasty arrangements were being made to get the steamer and hose cart on the road, word came that the building could not possibly be saved. The loss is a severe one and considerable inconvenience will result. There was no loss of life and no one was injured. The Legislature being in session, prompt action will be taken to rebuild. There was an insurance of $75,000 on the building. The cost of the building, furniture, etc. was about $150,000. The spring time is almost at hand and in a few weeks the masons can be at work.
February 22, 1894

100 YEARS AGO
Carl Temple, well known in Cooperstown, having gone out from here with one of the draft contingents last April has written to his father Seth D. Temple from Base No. 236 in France concerning his life there. Carl has been selected for entertainment duty. He and another give poses and a short wrestling exhibition. They travel from one town to another, using the base as their headquarters. They participated in a minstrel show before the officers and nurses. Carl writes that they even stood on chairs to witness their act. He says their act went so well that they are going to send them to Chaumont to put it on before General Pershing and his staff. The officers want to send Carl to Paris and enter him in a wrestling tournament there. He told them all he wanted to do was to get home. In a German trench the other day they unearthed a chest of coins, silver and gold. Carl grabbed a gold spoon as his share and says he is going to bring it home to his mother.
February 19, 1919 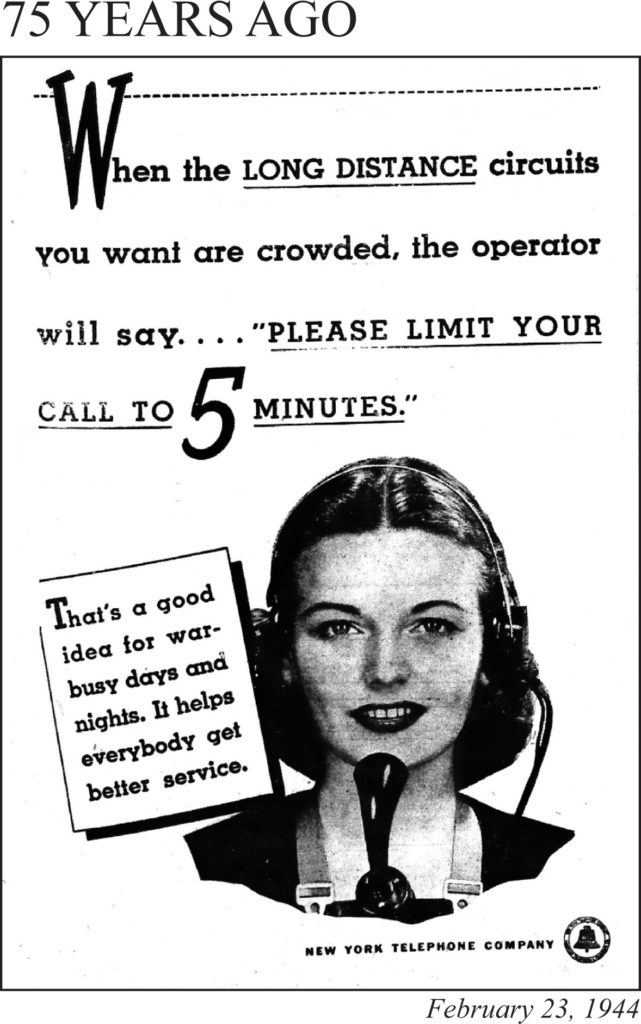 50 YEARS AGO
Thousands of people gathered in Cooperstown over the weekend to help make the “Winter Magic” Carnival one of the most successful ever staged here. The carnival began on Friday night and continued through Sunday with huge crowds attending each event and hundreds of entries for the various categories. About 400 were at the skating rink on Lake Street when Miss Janet Graham, CCS senior, was crowned queen of the carnival. She received the WDOS trophy, a tiara given by the festival committee and a $100 savings bond presented by the Cooperstown Chamber of Commerce. Other contestants in the queen contest included Mary Guiney, Becky Fields, Pat Weir, Linda Feltz, Chris Roberts, Tina Rathbone and Joyce Schellhammer.
February 26, 1969

25 YEARS AGO
There has been a lot of grumbling about the weather this winter. Has it been that bad? According to Harold Hollis, a cooperative observer for the National Weather Service, this winter is stacking up to be one of the worst on record. “If we stay on track this February, it would make it the coldest February in 75 years,” Hollis said.
February 22, 1994

10 YEARS AGO
The Otsego County Chamber of Commerce has named The Otesaga Hotel as its NBT Bank Distinguished Business of 2009, and state Supreme Court Judge Robert A. Harlem Sr. as its Eugene A. Bettiol, Jr. Distinguished Citizen. (Editor’s note: Judge Harlem passed away in 2012).