'Trying this case will not be an easy thing,' Minnesota's attorney general says. 'Winning a conviction will be hard.'

Watch as Esper breaks from Trump on military action

'All the world is watching': After nationwide protests, 4 ex-officers face new charges in George Floyd's death

Store will no longer call police for nonviolent crime

ACLU files suit on behalf of journalists in Minnesota

Across the country, young activists take different approaches in the name of justice for George Floyd

Warriors' Steve Kerr praises 'younger generation' amid George Floyd protests: 'The hope that we all need'

Jim Acosta clashes with McEnany, suggests MLK 'likely would not have approved' of clearing DC protesters

SoHo tattooist says his shop torn apart: 'I did not see a single cop on the ground'

Biden and Trump all tied up in Texas: poll

200 YEARS AGO
To The Public – The subscriber thinks it his duty to inform the public that he has found his absent daughter in Cherry Valley in a comfortable and respectable situation on the 22nd inst. Those kind citizens who have assisted in the discovery, will be pleased to accept my warmest thanks. John Cockett, Hartwick, January 23, 1819.
The Electors of the Town of Otsego are requested to meet at the house of Luther Savage in Oaksville, on the 15th day of February next, for the purpose of nominating Town Officers for the ensuing Town Meeting. Sig. A Number of Electors. January 25.
January 25, 1819

175 YEARS AGO
From the Hartford Times – An affray between a hawk and a hen. The hawk, a very large one, measuring from wing to wing over four feet pounced upon a hen, and raised her a short distance in the air, when, from some cause, the hen became disengaged, or so much obstructed the progress of the hawk that he pitched downwards, and went directly into a well! A colored woman named Clara Burden, seeing them go into the well, ran to see how matters progressed, and found the hawk lying upon his back in the water, and the hen standing upon him! The woman lowered the bucket and safely secured the hen. She then held the head of the hawk under water with a pole awhile, and finally, secured him also. All hawks should learn from this that they cannot steal with impunity.
January 22, 1844

150 YEARS AGO
Died in this village, on Wednesday, January 20, Henry P. Metcalf, aged 62 years. Mr. Metcalf was one of the 38 old inhabitants mentioned in “The Chronicles of Cooperstown” in 1862, as having resided here over 50 years. His early life was spent in the Book manufactory of his uncles, the old firm of H. and E. Phinney. His integrity, truth and kindness of heart and manner have ever made and kept him many friends. Although very infirm for years, he was able to walk out a fortnight since. His last illness was borne with patience. The funeral services will be at the Episcopal Church of which he was a member. The Metcalfes were among the first settlers of Cooperstown, the Hon. Elijah Hyde Metcalf, father of the deceased having removed here in 1799, and died in 1821.
January 22, 1869

125 YEARS AGO
Local – As Frank Pierce, of Tunnicliff Inn, was out on the lake fishing, the ice suddenly gave way under him, and it was several minutes before help arrived. A rope was thrown to him and he was drawn out of his cold bath. The ice seems very treacherous this winter.
Miss Grace Hecox, daughter of Francis Hecox of Wileytown, was married to Fred Young of the same place on Wednesday, January 17. Mr. and Mrs. Young immediately left on a bridal tour which will keep them from home for several days.
At the annual election held last week, the following were chosen directors of the Cooperstown Aqueduct Association: E.M. Harris, Alfred C. Clark, S.G. Browning, J. Warren Lamb, J.A.M. Johnston, Inspectors of Election were C.R. Burch, J. Fred Reustle, E.S. Bundy.
Edward S. Clark is in town.
January 25, 1894

100 YEARS AGO
Residents of Cooperstown were shocked and saddened by the news of the death in the Naval Station Hospital at Montauk Point, Long Island last Thursday morning of Horace Lynn Marble, son of Mr. and Mrs. James L. Marble of Linden Avenue. It was not generally known that he had been ill. A telegram on Monday gave assurance that he was recovering. Only a few hours later pneumonia developed and on Wednesday afternoon his mother and sister Belle left for Montauk having been called there by his critical condition. But he had died before they reached him. Marble was a 1912 graduate of Cooperstown high school and later attended the Albany Business College from which he
graduated in 1914. At the time of his enlistment in
December 1917, he was employed as an accountant at
the Glimmerglen Farms.
January 22, 1919

75 YEARS AGO
A certificate of incorporation for the Otsego Aviation Service, Inc. was filed in the office of the Secretary of State on Monday, January 24. The corporation was formed for the purposes of operating an airport, operating, leasing and maintaining aircraft and dealing in aircraft and equipment. The incorporators named in the certificate were George G. Tillapaugh, Ernest T. Whitaker and Edward R. Curtis, all of Cooperstown. Edward R. Curtis is attorney for the corporation. The corporation has leased part of the land owned by the Cooperstown Sportsmen’s Inc., known as the Brown farm, about one mile from the Village of Cooperstown on the Fly Creek road, where a flying field with adequate runways and hangars will be constructed. The airport will be open for use of the public early in the summer of 1944. Hangar space and maintenance service will be available to those who own their planes.
January 26, 1944 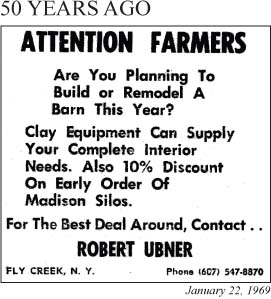 25 YEARS AGO
Doubleday Field may see some improvements if a matching grant application filed by the Village of Cooperstown is successful. The board of trustees agreed to apply for a $125,000 Sports Facility Assistance Program grant, which is funded through the state Urban Development Compact. The UDC grant would pay for the re-flooring of the grandstand, sandblasting the steel superstructure in the grandstand, repainting and renovating the restrooms and bringing them into compliance with the Americans for Disabilities Act.
January 25, 1996

10 YEARS AGO
Lauren Groff’s second book “Delicate Edible Birds,” a collection of nine short stories, is about to take its place on hundreds of Cooperstown bookshelves – and thousands nationally – alongside her acclaimed first novel “The Monsters of Templeton,” released a year ago. “Every single main character is a woman,” Groff said from her home in Gainesville, Florida. “I like to look at these wonderful, inspiring women and writing about them.” She paused. “Not everyone is wonderful. Some of them do some actually cruddy things.” The daughter of Gerald and Jeannine Groff of Cooperstown, Lauren estimated she’s written 300 stories over the past dozen years.”
January 23, 2009