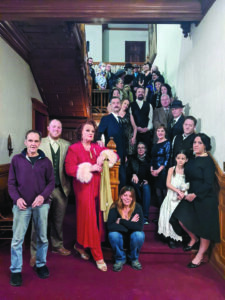 Filmmaker Lori Bailey treated Cooperstown’s Rotary Club to three preview clips of her upcoming moving, “A Roadhouse Coup,” filmed entirely in Otsego County and on track for a September 2022 release.

“We’re just about done with shooting the film,” she told a full house of Club members during its March 8 meeting at the Otesaga Hotel. “I’m doing this in ‘docudrama’ style so we’re working hard on the editing. Soon we’ll be done with a feature-length film; I’m looking at an 80-to-90-minute piece when we’re done.”

The Rotary meeting was their first chance to see clips from the nearly-finished product.

“Together we’ve made something very special, something to be proud of,” Ms. Bailey said in introducing the clips. Responding to a question about the use of local actors, she said, “I’ve used SAG (Screen Actors’ Guild) actors in past projects and looked into bringing them in for this one. I got concerned that then the story would become more about them than the story I wanted to tell. To me, this film is about this area. I wanted real people to play real parts. I like that better.”

She said she found filming in Otsego County to be, in the end, much easier than she initially feared.

“This is my sixth film,” she said. “I would normally go to the Adirondacks but wanted to keep this local story local.”

She recalled for the Club how she went first to Oneonta’s then-Chief of Police Doug Brenner .

“You don’t know me,” she said as she approached him. “I’m Lori Bailey and I’m making a movie. Do you want to be in it?”

He connected her to Mayor Tillapaugh – who plays a prohibitionist speaking out against alcohol – who introduced her to Senator Seward, who directed her to District Attorney Muehl. They shot scenes at the Hanford Mills Museum, the Oneonta Armory, the Masonic Lodge, the old County Jail (where they used the cell that originally held Eva Coo in custody), and the county’s Courthouse.

“Everyone was so wonderful in connecting the dots to make this film,” Ms. Bailey said.

She told Club members it was a challenge to secure funding for an independent film, but said when it came to seeking big-budget support from Hollywood, it was a ‘been there, done that’ experience that she did not want to replicate.

“I call my production company ‘Barterwood,’” she said. “I’m the queen of bartering to make things happen.”

“This actor came in as a transvestite and won the role hands-down,” Ms. Bailey said. “He completely embodies that character and is remarkable.”

Club members applauded the three clips enthusiastically, all looking forward to the film’s eventual release. Ms. Bailey said she hopes to have the film edited and complete in time for a September premier at Oneonta’s Foothills Theater, with a more general release on streaming services to follow.