COOPERSTOWN – With adjustments COVID-19, The Cooperstown Rotary Club’s traditional Election Day breakfast will proceed 7 a.m. to 6 p.m. Tuesday, as it has for more than a half-century.

This year, the Doubleday Café will be hosting the breakfast, making the pancakes and serving them in-house at 93 Main St., according to Phil Dina, who is helping organize the event this year.

END_OF_DOCUMENT_TOKEN_TO_BE_REPLACED

JEROME: What The ‘Plus’ In PolioPlus?

Thirty years ago, Rotary International made a promise to the children of the world – we will eradicate polio worldwide. This pledge launched the PolioPlus program, the first global initiative to provide mass vaccinations to children. Rotary and its partners in the Global Polio Eradication Initiative (GPEI) have made great strides in their sustained effort to end polio forever despite many challenges over the years. Rotary remains optimistic and committed to the final push towards a polio-free world.

Since then, polio cases have dropped by 99.9 percent, from 350,000 cases in 1988 in 125 countries to 33 cases of wild poliovirus in 2018 in just two countries: Afghanistan and Pakistan. In 2019, health officials celebrated the three-year mark of the last reported a case of wild poliovirus in Nigeria – a major milestone that makes it possible for the entire African continent to be certified wild poliovirus-free – a remarkable achievement!

The benefits of the PolioPlus program go well beyond the eventual end of polio. Early in Rotary’s efforts to vaccinate every child against polio, community and tribal leaders in some areas said their villages had matters more critical than polio that needed to be addressed first. Issues like clean water, proper sanitation, and education to name a few. Rotary responded by providing grants to dig wells, install toilets, build schools and vocational training facilities among other efforts to address these needs. As projects were completed over the years, the leaders realized Rotary cared; and they allowed health workers to come in and provide the vaccines. In many parts of the world, access to clean water, improved sanitation and hygiene, and a basic education are available thanks to Rotary International.

Other pluses of the PolioPlus program include the utilization lessons learned, systems designed, and infrastructure established for polio eradication in other situations. An example can be seen in northeastern Nigeria, where malaria kills more people than all other diseases combined. In 2017, the World Health Organization, one of Rotary’s GPEI partners, used the polio eradication staff and infrastructure to deliver antimalarial medicines along with the polio vaccine to children there. It’s reported that this campaign reached 1.2 million children. 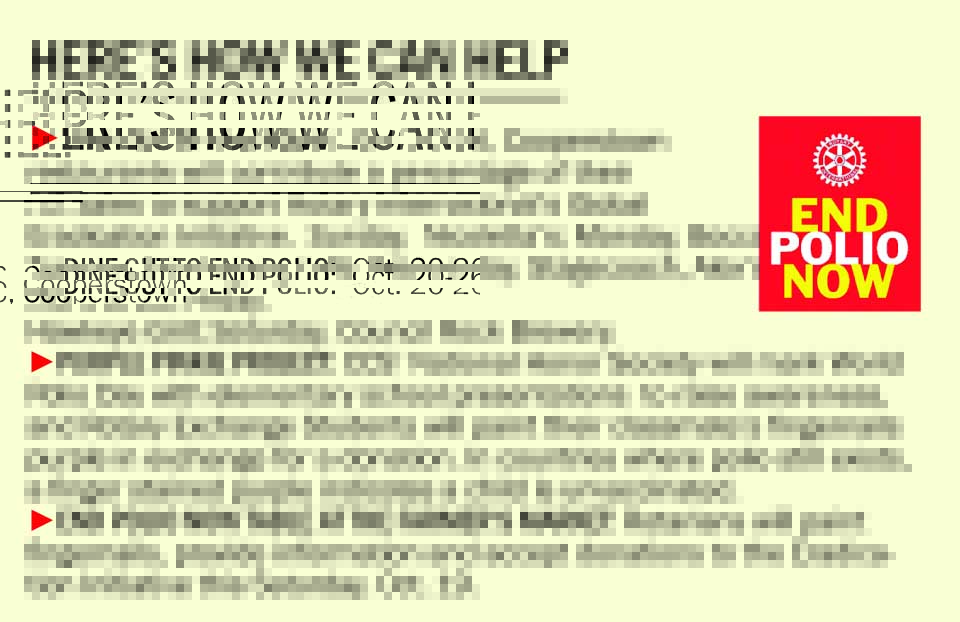 As a result of the PolioPlus program, now healthcare workers who provide basic care to families, routinely give children preventative care such as Tdap and Vitamin A before giving polio vaccines. According to a recent study, 1.25 million deaths were prevented by providing Vitamin A to children at the same time as the polio vaccine.

The lessons learned from the PolioPlus campaign, the research facilities built for disease analysis, and the surveillance systems designed to locate infected persons are successfully being used to prevent other diseases from spreading. Rotary has a right to be proud of all that we and our GPEI partners have accomplished because of the PolioPlus program.

Rotary’s 1.2 million members of more than 35,000 Rotary clubs in over 200 countries have been actively raising funds for this cause for decades including more than $60,000 contributed by the Rotary Club of Cooperstown. To complete the final immunizations and defeat polio, Rotary is committed to raising $50 million annually over the next three years. The Bill & Melinda Gates Foundation will match Rotary’s commitment 2:1.

Without full funding, this paralyzing disease could return to previously polio-free countries, putting children everywhere at risk. According to specialists the final one percent is the most difficult for this very contagious disease. If we do not stop it now, new cases may re-emerge in countries where the disease was once eliminated, and many more children may be at risk.

Several events have been planned, including the following:

Cooperstown Dines Out to End Polio – A week-long event during which local restaurants will contribute a percentage of their net sales to support Rotary International’s Global Eradication Initiative.

Purple Pinkie Project – Students from the Cooperstown Central School chapter of the National Honor Society (NHS) will celebrate World Polio Day with presentations in the elementary school to raise student awareness of polio and the need to eradicate this paralyzing disease. NHS members and Rotary Youth Exchange students will paint their classmate’s fingernails purple in exchange of a donation towards polio eradication. In countries where polio still exists, a finger stained purple indicates a child has received a polio vaccination. A flyer about this project will be sent home with the elementary school students soon.

End Polio Now Table at the Farmer’s Market – Rotarians will offer to paint fingernails, provide information on the polio eradication initiative and accept donations to the Eradication Initiative on Saturday, October 19, 2019. Please stop by our table.

Rotary members, students and area residents will join millions who are working to raise awareness and funds to end the debilitating disease of polio, a vaccine-preventable health risk that continues to threaten children in parts of the world today. I urge you to reflect on your good fortune to live in a polio-free county and contribution to support the global effort to End Polio Now.

To make a direct contribution, readers are welcome to contact me at mjerome@stny.rr.com 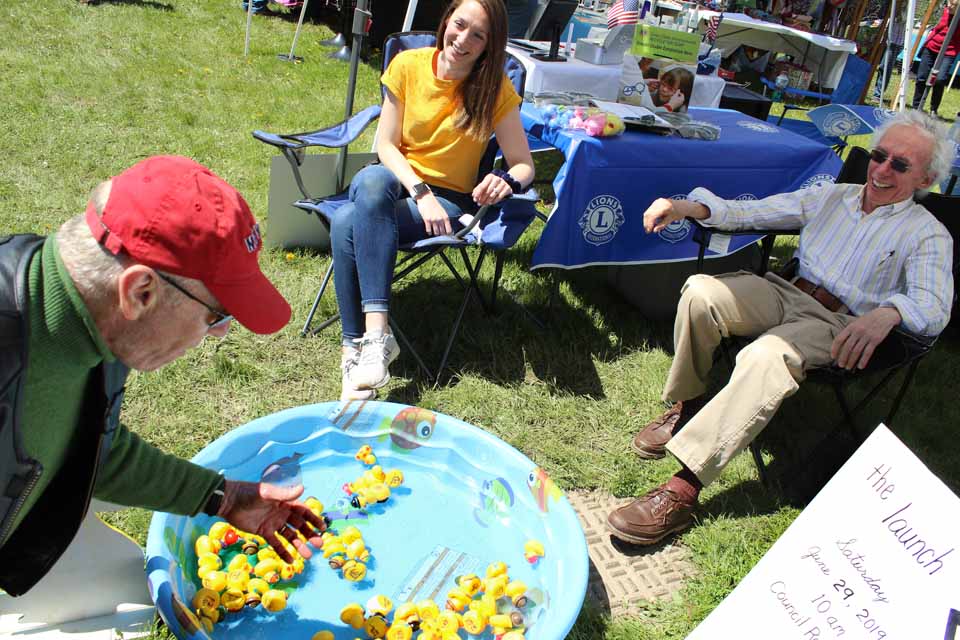 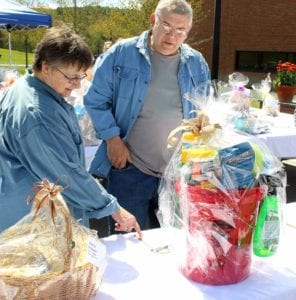 Taking advantage of the first fully sunny day in weeks, hundreds shoppers, strollers and the curious at this hour are making their ways through 80 booths of arts & crafts, books, handmade clothing and much more at the Cooperstown Rotary Club’s Spring Fling, underway until 5 on the Clark Sports Center’s front lawn. (Plenty of free parking.)  Above, Rick Jagels of Cooperstown tries his luck at the rubber ducky pond being operated by the Cooperstown Lions’ to raise funds for its Leo Club’s trip to the U.N. next spring.  Presiding is Deirdre (Donley) Crouse, incoming Lions’ president, and veteran Lion John Saphier.  Inset, Don and Rosie Hoag examine 48 gift baskets up for the asking at a Silent Auction.   There’s food, and also music:  Ah Coopella is performing now, followed by the O’Donnell School of Irish Dance at 2; Sky Parlor at 3, and Leroy Lytel at 4.  The Clark’s spring open house is also underway:  Sign up for a three-month membership and get the fourth month free.  (Jim Kevlin/AllOTSEGO.com)

HAPPENIN’ OTSEGO for SATURDAY, MAY 18

END_OF_DOCUMENT_TOKEN_TO_BE_REPLACED

With Live Auction Due At 1, Rotary Crew Ready To Go

With Live Auction Due At 1, 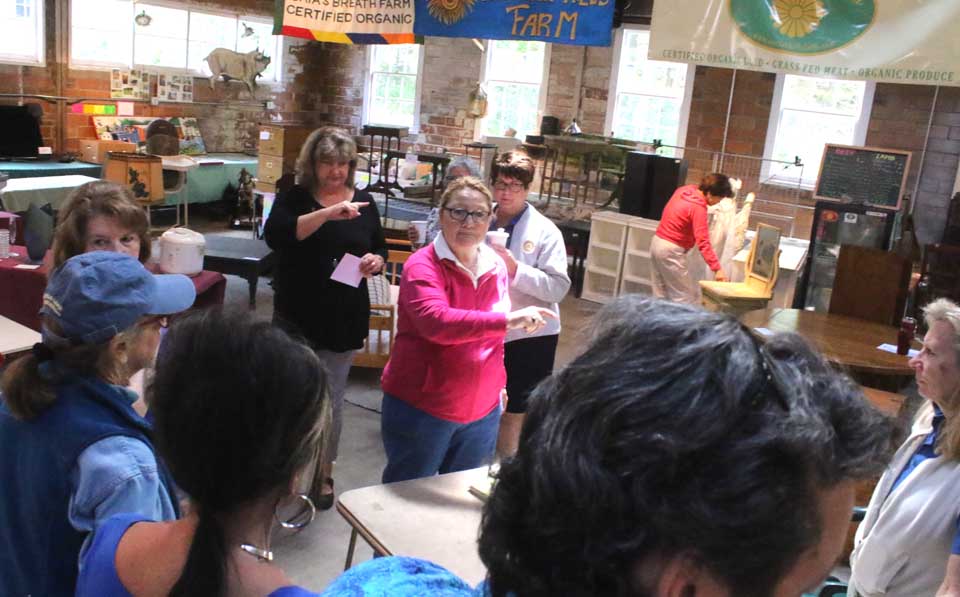 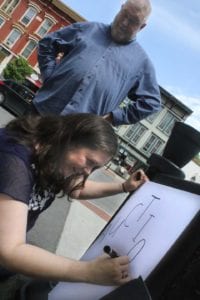 There’s Still Time To Sign Up For Rotary Golf Tournament

COOPERSTOWN – There is still time to sign up for this Sunday’s sixth annual Cooperstown Rotary Foundation Golf Tournament at the Meadow Links Golf Course, offering over $1,000  in prizes.  Tee time is 2 p.m.

To sign up, e-mail cooperstownrotaryfoundation@gmail.com or call Ellen Tillapaugh at 547-5646.