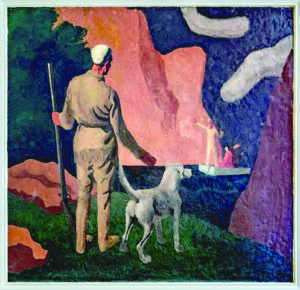 The Mamaroneck Historical Society succeeded in its ambitious quest to raise the funds needed to save James Fenimore Cooper murals from destruction, but more work remains as the group strives to rescue the artwork from the walls of Mamaronek High School.

The Freeman’s Journal / Hometown Oneonta first reported on the endangered murals as word spread of the high school’s plan to cover – and in some cases, destroy – eight Depression-era murals depicting scenes from James Fenimore Cooper’s Leatherstocking novels and his life as a resident of the Westchester County town. The murals stand in the way of the Mamaroneck High School’s plans to build new computer learning labs, and the Historical Society leapt into action to spare them from the wrecking ball.

“It’s good news but it’s different news,” Mamaroneck Historical Society’s co-president John Pritts said of the group’s success to date. “We had no idea until we started how complicated it would become to save the artwork. Those murals have been on the walls for 81 years. They’re being very stubborn and they don’t want to come down easily. I think they like being up there where they’ve always been!”

Mr. Pritts told The Freeman’s Journal / Hometown Oneonta the Society had successfully removed two of the eight murals but, facing the school board’s April 7 deadline, is taking steps to preserve artwork that seems stuck in place.

“We’ve surfaced the murals and covered them in plexiglass where we can’t get them down,” he said. “A wall will be put up in front of them to keep them covered. Someone will be able to get them down safely someday, I’m sure.”

In the meantime, Mr. Pritts said the Society hired a professional photographer and videographer to memorialize the murals for all to see.

“We did complete work-ups of each mural,” he said. “My original pictures for our website pale in comparison. With these new pictures, the public can get an indication of what they looked like when they were new. Amazing work.”

The Society partnered with LMC Media Productions, as well, to produce a 14-minute video tour of the murals – available now on YouTube as “The James Fenimore Cooper Murals at Mamaroneck High School.”

“The video details the where, what, and why of each painting, who painted them, what they’re about,” Mr. Pritts said of the virtual tour.

“The art is beautiful,” he said. “Its historic significance is immense. Having it go away would be a sin. But saving it has been harder than we, our conservator, or the contractors thought. It is an immense undertaking.”

Fundraising continues, too, as the Mamaroneck Historical Society prepares to conserve and store what they can with minimal damage, hoping to have some of the art on public display in public buildings in Mamaroneck and Larchmont. The Society’s website includes a link to its ongoing GoFundMe campaign (www.mamaroneckhistoricalsociety.org).

“We’re considering this a victory,” Mr. Pritts said. “We aimed to save them in one way or another and we’ve been able to do that. There’s still a lot of work ahead, but we kept the murals from being destroyed.”

Visit https://www.mamaroneckhistoricalsociety.org/ to view updated photos of the murals and learn more about the group’s on-going fundraising effort to preserve the artwork. Visit https://www.youtube.com/watch?v=S_Y7FjrtuTY to watch the virtual tour.