The Baseball Hall of Fame is striving to balance the sport’s sometimes troubled racial history with athletic prowess on the diamond.

“We wanted to shine a light on these conflicted stories. And when the Board of Directors met this summer, its members unanimously decided to make these important changes”

So now, the “Pride and Passion” exhibit has been renamed “Ideals and Injustices: A Chronicle of Black Baseball.”

It focuses not just on the formation of the Negro Leagues and Jackie Robinson’s breaking of the color barrier, but addressing the history of racism within the game, even by those honored in
the Hall of Plaques downstairs.

“Cap Anson, for example, was an early superstar of baseball, but his actions helped lead the league towards segregation,” said Shestakofsky.

A first baseman for the Chicago Cubs, Anson was reported to have said he “would never step on a field that also had a Black man on it.”

He was inducted into the Hall with the first class, in 1939. 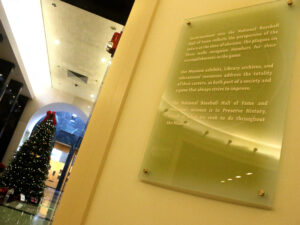 Though Anson and others, including Commissioner Kenesaw Mountain Landis, had previously been mentioned in “Pride and Passion,” Shestakofsky said the updated panels “clarifies” their opposition to integrating the league.

“These upgraded panels delve more deeply into the complicated history,” he said. “They’re in the Hall of Fame for a reason, they did a lot to sustain the game, but there’s more to be said about their lasting impacts.”

Nonetheless, the Hall does not plan to alter the plaques in the gallery.

“I don’t feel in any context that one should expunge history, that one should erase history,” said Jane Forbes Clark, Hall of Fame chairman, in an interview with the New York Times that appeared over the weekend.

“Part of our mission is not only to honor excellence and connect generations, but it’s to preserve the history of the game, and that’s what we’re doing,” she said. “We’re reacting to the evolution of society and society wanting a deeper understanding of underlying racism — its causes, its history, and how it continues to affect the game.”

Instead, a sign has been placed at the entrance to the Hall of Plaques, which reads: “Enshrinement into the National Baseball Hall of Fame reflects the perspective of voters at the time of election. The plaques on these walls recognize Members for their accomplishments in the game.”

It also directs visitors to continue their own exploration of the history in the museum exhibits, library archives, and educational resources.

“When people request educational materials, Jackie Robinson and Civil Rights are requested the most often,” said Shestakofsky. “Education is one of the pillars of our work as an institution.”

But the changes have also allowed the Hall to tell more stories to their visitors.

“Someone like Effa Manley, the only woman enshrined in the Hall, deserves a more full look,” he said. “As an owner, she did a lot to enhance the status of black baseball.”

“She was exceptional,” Clark told the Times. “I just find it a wonderful balance, because it’s not just that we’re looking at racists and Anson and Landis, we’re also looking at somebody who did something so positive.”

Manley was among 17 figures — all deceased — from the Negro leagues elected to the Hall in 2006, following a study by the Major League Baseball. However, that same vote excluded Buck O’Neil, former players and the MLB’s first black coach.

In 2006, O’Neil spoke at the induction ceremony, and a lifetime achievement award at the Hall was named in his honor. But he was never voted into the museum.

Shestakofsky said the exhibit and new signage have received “a very positive response,” so far, and that the curators will continue to look at ways to improve exhibits throughout the museum.

“We are a history museum,” he said. “Our job is to preserve the game’s history.”