A long time ago in what seems like a galaxy far, far away … way back in the pre-coronavirus era, January of 2020 the New York Yankees all-time greatest shortstop Derek Jeter was elected to the National Baseball Hall of Fame and Museum, garnering 396 of 397 votes.

Jeter fell one vote shy of joining teammate Mariano Rivera as just the second unanimous selection in Hall of Fame voting history. Rivera was named on all 425 of the ballots cast in the 2019 election.
Jeter made his major league debut May 29, 1995, six days after Rivera made his first appearance, heralding an era that saw the Yankees reach the post-season for the first time in 14 years. The Yankees were eliminated by the Seattle Mariners in the 1995 ALDS but, propelled by Jeter’s Rookie of the Year performance, returned to the post-season in 1996 and won the World Series for the first time in 18 years.
Rivera finished third in 1996 Cy Young voting posting an 8-3 record with a 2.09 ERA and 130 strikeouts in 107 innings in his first full season as the team’s set-up man in the bullpen. The pair is eternally linked on Yankees modern “dynasty” teams of the late 1990s and early 2000s. As Yankees their entire careers, they would win 13 American League East division titles, seven AL pennants and five World Series, including three in-a-row from 1998-2000.

Jeter made the first of 14 All-Star Game appearances in 1998 and won his first of five Gold Glove Awards in 2004. He is the Yankees all-time leader with 3,465 hits; he surpassed Lou Gehrig’s mark of 2,721 in 2009. His 2,674 games played as shortstop are a record for the position and he never played another position in the field, even after Alex Rodriguez, a seven-time All-Star and two-time Gold Glover at the position, joined the Yankees in 2004.

The cancellation of the 2020 Induction ceremony because of the pandemic may have postponed Jeter’s entrance to the Hall but still constitutes back-to-back inductions of New York Yankees for the first time since early Yankees owner Jacob Rupert and modern era manager Joe Torre were inducted in 2013 and 2014. Arguably this is much bigger. About 55,000 fans turned out in 2019 to see Rivera and a strong class inducted. Nobody can predict what Jeter with a one-year delay will draw.

Yankees fans relish in mentioning the team’s unparalleled 26 World Series championship. The team is also the most widely represented in the Hall’s plaque gallery. Jeter is the latest in a lineage of Yankees Hall of Famers; there are 28 Bronzed Bronx Bombers enshrined in Cooperstown, three more than the 25 members of the New York/San Francisco Giants.

There are famous and widely published photo(s) of Jeter reaching up and tapping a sign containing a Joe DiMaggio quote reading: “I want to thank the Good Lord for making me a Yankee,” Joe DiMaggio, 1941. It was a ritual Jeter practiced on his way from the clubhouse to the dugout before every Yankees home game and he later admitted to taking the sign after the team’s last home game at old Yankee Stadium in 2008. 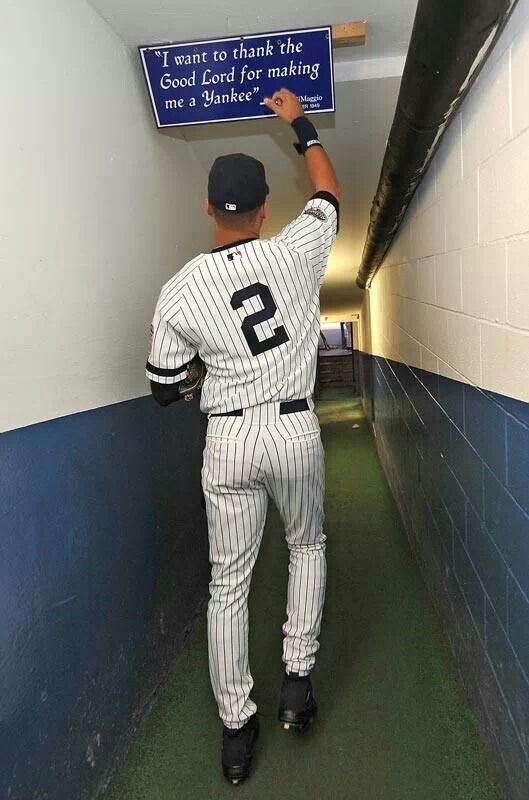 Manager Casey Stengel presided over the Yankees 1950s dynasty winning 10 consecutive AL pennants and seven World Series and was inducted to the Hall in 1966 followed by 1930s and 1940s pitcher Red Ruffing in 1967.

The Yankees ran off another streak of three straight inductions beginning with 1920s and 1930s chief executive and dynasty architect Ed Barrow in 1953, followed by catcher Bill Dickey in 1954, the great Yankee Clipper Joe DiMaggio in 1955.

On two occasions two Yankees were inducted together including: 1950s and 1960s teammates Mickey Mantle and Whitey Ford in 1974 and Lou “The Iron Horse” Gehrig and “Wee Willie” Keeler in 1939.

Babe Ruth was of course elected on the Hall of Fame’s inaugural ballot in 1936.

Other Yankees in the Hall of Fame include, pitchers, Jack Chesbro (1946) and Herb Pennock (1948), managers, Joe McCarthy (1957) and Miller Huggins (1964), second baseman Tony Lazzeri (1991), shortstop Phil Rizzuto (1994) and outfielder Dave Winfield (2001).  “Mr. October” Reggie Jackson who earned his moniker because of his standout World Series performances with the Yankees in 1977 and 1978 was elected to the Hall in 1993 but his primary team is identified as the Oakland A’s in spite of the fact that his plaque is adorned with a New York Yankees cap.