Mayor Gary Herzig did not mince words after carbon-monoxide leaks from the former Oneonta Hotel cause the adjacent 189 Main professional offices next door to be evacuated twice in four days.
“People’s well-being is at risk if we delay action any further,” Herzig said. “Not bringing that building up to code is a risk we should not be taking.”

On Monday, Jan. 28, a woman was taken by ambulance to Fox Hospital with blue lips and blue fingernails, signs of carbon-monoxide poisoning, after a hot water heater in the basement of 195 Main malfunctioned, pumping C-O gas into the ventilation system next door.
Helen Garvin, who works at LEAF Inc. on the ground floor, was initially told she didn’t have to leave. But around 11 a.m., carbon-monoxide alarms began to beep. “They came back around and evacuated the whole building,” she said.
Five other office workers were taken to Fox Hospital as a precaution, and the building was reopened at 2:30 that day.
It was the second such malfunction in four days.
On Friday, Jan. 25, the building was evacuated after carbon monoxide detectors went off around noon, prompting inspectors to search the basement of 195 Main, where they discovered tape had been placed over one of the air intakes on the boiler.
It was then that Nicolae Pervu, who owns the building with his wife, Melania, allegedly confronted the city inspector, who left the building out of fear for his personal safety. “He felt threatened by Mr. Pervu,” said Herzig.
Inspectors from NYSEG “red-tagged” the boiler, indicating that it was in need of repair. But according to Herzig, on Monday morning, the Pervus called NYSEG to let them know they were going to restart the boiler.
“NYSEG said they were going to send someone over to inspect it,” said Herzig. “By the time their inspector got there, the alarms were going off at 189 Main.”
According to Herzig, NYSEG “cut the pipe” to the boiler to prevent it from being turned back on until they complete their own inspection and turned it back on themselves. 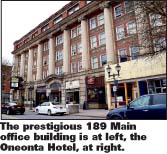 “This is serious,” said Herzig. “The building is not being properly maintained. We cannot jeopardize the lives and well-being of the people in and around that building.”
The incidents came just days after City Attorney David Merzig asked County Judge John F. Lambert to uphold the city’s original Order to Vacate, issued last April.
In a meeting with Judge Lambert’s law clerk on Thursday, Jan. 24, City Attorney David Merzig was told to bring an Order to Show Cause to the judge, recommending punishment for the Pervus for failing to comply with Lambert’s September order that the building be brought up to code by Jan. 11. The order will then be presented to the judge for his ruling.
“These two incidents highlight why we’re taking this action,” said the mayor. “We need to take action to bring that building up to code so people can live there safely.”
Herzig said that these two incidents will be documented and presented, along with the recent inspection report, to Lambert as part of the Order to Show Cause. The city attorney said he hoped to have the Order prepared to submit this week.
Should the order to vacate be upheld, Herzig said the city is already working with the county Department of Social Services and other agencies to relocate the remaining tenants into safe housing.
“We are not going to put anyone on the street,” he said. “We are working together to make sure we have appropriate places for everyone to live.”
As of press time, a call to owner Melania Pervu was referred to her lawyer, Ryan Manley of Harris, Conway & Donovan PLLC. Manley did not return the call.