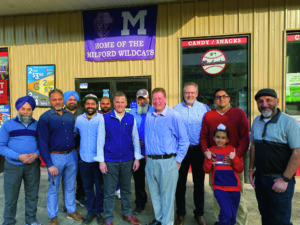 Dutchess County Executive Molinaro, now challenging Antonio Delgado in the race to represent the newly redrawn 19th Congressional District, said government is taking “too much advantage of New York drivers.” He said he wants Washington to partner with state governments to reduce the entirety of the gasoline tax burden passed along to consumers.

“The least that Washington and Albany can do is provide some relief at the gas pump,” Mr. Molinaro said. “This federal government can take a break from picking the pockets of the families and small businesses, reduce some of the massive increases in spending, and give a little back to us.”

“It’s always offensive to me when I hear the same tired old argument that government can’t cut costs,” he said. “When the Republicans are in the Majority in the House after this fall’s elections, we’ll use the power of the House to demand efficiency.”

“As a kid who grew up on food stamps, I can see the pressures that everyday costs put on a family,” he said. “Take a look around. Farmers, lawn and gardening companies, truckers, tourists – they’re all getting hit hard every step of the way with this increase in gas prices.”

Apple Food & Grocery’s Paul Singh, who owns the popular business with his family, said he talks daily with customers about the challenge of paying for a full tank of gasoline. He said his customers have been understanding, and he’s hoping conditions improve in time for summer travel.

“New York comes back when people start moving around the state again,” he said. “Dropping the gas tax for the summer would be a stimulus to the economy. It puts money back in peoples’ pockets, and then, they’re more likely to stop at a small local shop like ours for a soda and supplies on their way to a barbeque in the park.”

“The price of gas has a massive impact to all of us in the small business world,” he said. “We’re hopeful the market calms down and this is a short-term problem. Until then, we need our leaders in the federal and state governments to do what they can. Tap the reserves, finish the pipeline, suspend the tax – anything that gets this state moving.”

Sen. Oberacker’s legislation, introduced alongside Binghamton Senator Fred Akshar, stands among a handful of proposals from both sides of the aisle seeking some kind of temporary suspension of the state’s taxes on gasoline. The issue likely would become a topic of discussion in negotiations for the state’s new budget, due April 1, 2022.