CDC director: US coming to the peak of coronavirus cases

Analysis: The EU has bungled its pandemic response

Podcast: Keeping faith in a pandemic

The US is in a recession, 45 economists say

Hear what Barack Obama said in 2014 about pandemics

Coronavirus outbreak: What is a 'car parade'?

Max Lucado: Coronavirus can’t cancel Easter – nothing can, even when churches are closed

Joe Burrow believes he can win wherever he goes: 'I'm not a loser'

DELHI – For the students in Gary Beckett’s Construction Management classes at SUNY Delhi, this year’s project is a chance to help change the lives of people in desperate situations. “Usually we just build sheds for people in the community,” he said. “These will help people get on their feet.”
Beckett’s classes – along with students in the electrical, carpentry and plumbing trades – are building “tiny houses” to help combat Otsego County homeless.
“The county spends a million dollars a year housing the homeless,” said Senior Planner Eric Scrivener in the Otsego County Planning Department. “We’re sending them to motels for $65 a night, where they have no supervision and no case management.”

The Otsego Board of Representatives received a $300,000 state grant last year, and partnered with Brackett’s program to to build up to 10 tiny houses on permanent foundations behind The Meadows, the county complex off Route 33 in the Town of Middlefield.
The Delhi professor said he bumped into Karen Sullivan, the Otsego director of planning, at the Ricky Parisian Scholarship reception in Oneonta – both their daughters were recipients. “And we got talking about the project,” he said.
His students began designing the tiny homes when the school year began. “They researched building codes and considered the spaces,” he said. “We invited the county and Social Services to a presentation, and they picked pieces from all of them to come up with the final design.”
One example had the entry along the long wall, but county officials decided they wanted it in the front. “They wanted to be able to see all the front doors simultaneously,” he said. “And the shape of the buildings makes them easier to transport.”
The 11- by 22-foot houses are suitable for one person and feature baseboard heating, a kitchenette with a two-burner stove, and a bathroom with a stand-up shower that could also come with walk in shower options to create the visual effect of more space, as well as ease of access all – especially for those that could be disabled or somewhat less mobile like many homeless could be. If these didn’t meet your requirements, you could always search for a plumbing company in St Clair who would be able to come and do the necessary adjustments. They will serve as emergency housing for men, whom Sullivan said are most likely to be homeless.
“The average stay will be 120 days,” she said. “The Department of Social Services will manage the property and help people with case management and life skills.”
Six tiny houses are planned, and two are now under construction. “Two more are planned for next semester,” said Scrivner. “These first two were sort of prototypes, but with the next ones, they’ll have fully built plans to work from.”
When the frames are done, plumbing students will install the sink, toilet and shower fixtures, while student electricians will wire the house for power and baseboard heating.
“We had considered a solar array on the property, but the payback time was too long,” said Brackett. “But I also know the county is looking into geothermal energy.”
The houses will be placed on concrete pads behind The Meadows, and the students will complete the plumbing and electrical hookups on site. “We want to get them finished as completely as possible so we’re not running back and forth an hour each way.”
Construction on the pads was delayed by a rainy
October, but Scrivener hopes to get the site ready
in April.
The state’s Department of Housing & Community Renewal partnering with an institution, rather than contractors, is a first. “It was an out-of-the-box idea,” said Sullivan. “But now it’s the model for tiny homes.”
“The focus of SUNY
Delhi is to get students real-life experience,” said Brackett. “SUNY Delhi students are always working with their hands.” 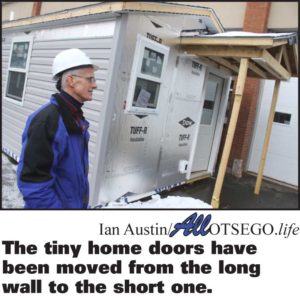 One thought on “Partnering With SUNY Delhi Pioneers Statewide Model”