ONEONTA — A three-car accident on West Street near Hartwick College closed down the road this morning on Friday, Oct. 1.

The unidentified driver, a 65-year-old man, made a wide turn on West Street going downhill and hit two cars, causing his car to roll over, according to the Oneonta Police Department. END_OF_DOCUMENT_TOKEN_TO_BE_REPLACED

A Mount Vision man was arrested Saturday, July 3, for leaving the scene of a hit-and-run accident that killed a Laurens bicyclist.

Michael Goodspeed, 32, is charged with second degree vehicular manslaughter and leaving the scene of an accident, according to a New York State trooper press release.

The bicyclist, Michael Vargas, 37, was hit on state Route 205, near the intersection of Timer Road.

COOPERSTOWN – A hit-and-run victim is recovering today after allegedly being struck by a vehicle on Chestnut Street last night.

According to Cooperstown Police Chief Mike Covert, a 76-year-old woman was walking on the sidewalk down Chestnut Street southbound when she was allegedly hit by a vehicle backing out of a driveway. The victim told police that the operator of the vehicle did not stop to check on her, and continued driving down the street.

END_OF_DOCUMENT_TOKEN_TO_BE_REPLACED

COOPERSTOWN – A Cherry Valley woman was ticketed with following too closely after crashing into a vehicle on Route 28 and veering off the road at 4:30 p.m. last Friday.   The accident blocked rush-hour traffic both ways for a  half-hour.

According the the accident report from the county Sheriff’s Department, Jane Duel, Cooperstown, was stopped in the northbound lane of Route 28 with her left blinker on, waiting to for traffic to clear so she could turn into her driveway.

Anna Vanderkrake was also driving in the northbound lane and looked down momentarily; when she looked up, she was unable to avoid hitting Duel’s vehicle, the accident report said.

END_OF_DOCUMENT_TOKEN_TO_BE_REPLACED 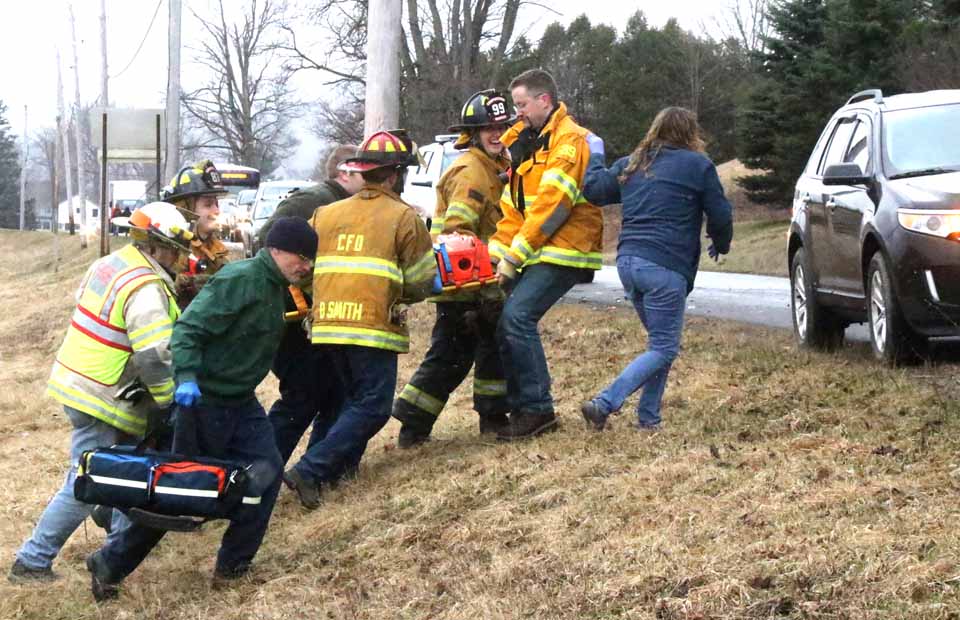 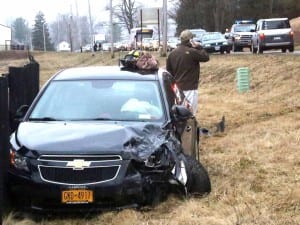 With Cooperstown Emergency Squad Chief Eric Pierce at the head of the stretcher, EMTs and firefighters carry the driver in a two-car crash across from the Clark Scholarship Program Office on Route 28 south of the village to a waiting ambulance. By shortly before 5 p.m., rush-hour traffic was moving again – albeit slowly – past the scene. There is no word yet on if those involved will be contacting a Personal Injury Lawyer to press charges.It turned out that a north-bound black Chevrolet, in photo at right, had rear-ended a car waiting to turn into a driveway, then ran off the east side of the road and into the black fence the circles the Clark properties in that vicinity. The accident happened about 4:30, and a fire truck was dispatched to the scene, as well as the ambulance crew. If you’ve been involved in a car accident then it’s important that you contact a local law firm, such as this los angeles car accident lawyer, immediately. You may well find that you’re entitled to compensation. There are loads of law firms out there that can help you get the compensation that you deserve. It can seem a bit daunting at first becasue there are so many. However, if you just spend a mintute and do your research, you’ll find that there are loads of law firms out there like Batta Fulkerson who could potentially help you. You just have to make sure that you use the right one for you. Even if it takes you a little while to find the right one.
(Jim Kevlin/AllOTSEGO.com)

READ POLICE REPORT ON THE ACCIDENT

There has been a traffic accident on Rte. 28 approximately half a mile south of Cooperstown that is blocking traffic for this hour. More details to follow.