COOPERSTOWN – In honor of Veterans’ Day, all veterans of the U.S. Armed Forces will be admitted free to the Baseball Hall of Fame, 25 Main St., from today through Nov. 30.

You will be asked to provide:

END_OF_DOCUMENT_TOKEN_TO_BE_REPLACED

Hall Looks To Early May On Induction ’20 Decision

Hall Looks To Early May

COOPERSTOWN – The Baseball Hall of Fame is targeting early May for a decision on Induction 2020, according to Jon Shestakofsky, vice president/Communications & Education.

“No decision has been made about Induction Weekend and conversations are ongoing,” Shestakofsky said today in response to a query.  “All scenarios are being discussed, including the possibility of continuing as planned for this July.”

With Derek Jeter in the Class of 2020 possibly drawing a record crowd, this year’s Induction has been awaited with particular anticipation.

The vote will occur Dec. 8 during the Baseball Winter Meetings in San Diego, and will be announced live on MLB Network at 8 p.m. that evening.

Those elected by 75 percent of the votes be inducted in Cooperstown on July 26, along with players chosen by the Baseball Writers’ Association of America, who will be announced Jan. 21, again on the MLB Network.

END_OF_DOCUMENT_TOKEN_TO_BE_REPLACED

COOPERSTOWN – The American Legion, especially through American Legion Baseball, and The National Baseball Hall of have had a special relationship for over four decades.

“American Legion Baseball was founded in 1925 to further citizenship through sportsmanship,” said Jeremy Field, director of communication at American Legion’s HQ in Indianapolis. “Every year our player of the year is honored at the Hall of Fame Classic game at Doubleday Field.”

END_OF_DOCUMENT_TOKEN_TO_BE_REPLACED

COOPERSTOWN – In a tribute to its most enduring fan, the Hall of Fame has created a digital archive of photos Homer Osterhoudt took in 1939 of Babe Ruth and the other honorees at the first
Induction Weekend – and they are available for viewing this weekend.

“We will miss Homer and hope this will be one small way to continue to remember his legacy, especially this Induction Weekend,” said Jon Shestakofsky, the Hall’s vice president/communications.

COOPERSTOWN – Bill King, whose quarter-of-a-century run as the voice of the Oakland Athletics cemented his status as one of the Bay Area’s iconic voices, has been selected as the 2017 recipient of the Ford C. Frick Award, presented annually for excellence in broadcasting by the National Baseball Hall of Fame and Museum.

King, who passed away in 2005, will be recognized during the Hall of Fame Awards Presentation on Saturday, July 29, as part of Hall of Fame Weekend 2017. King becomes the 41st winner of the Frick Award, as he earned the highest point total in a vote conducted by the Hall of Fame’s 17-member Frick Award Committee.

END_OF_DOCUMENT_TOKEN_TO_BE_REPLACED

where are hall of famers signing autographs 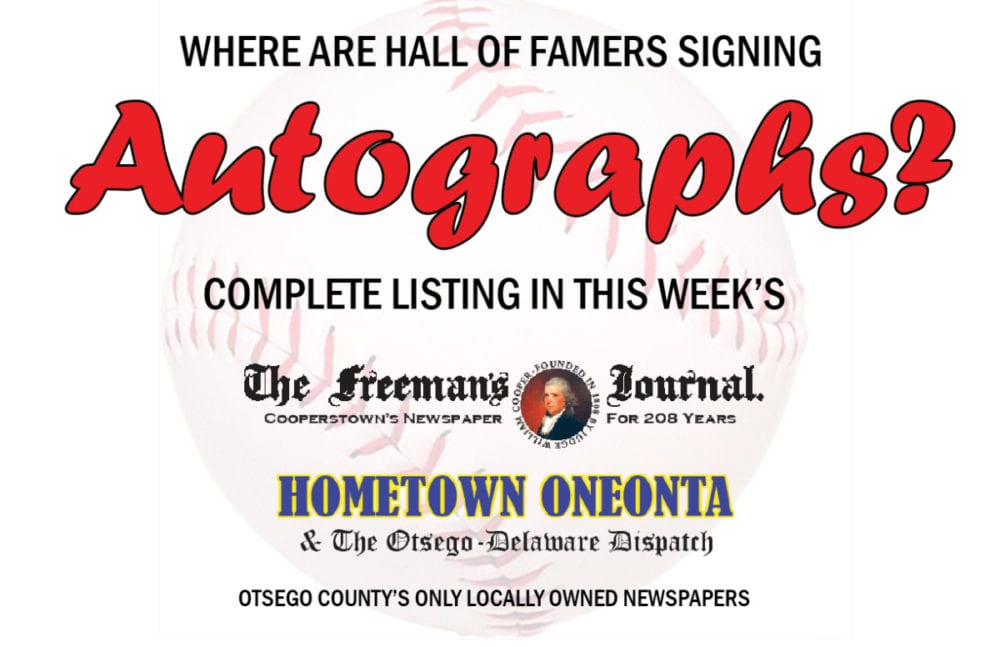 AVAILABLE AT THIS FINE LOCAL ESTABLISHMENTS

Beginning today, he succeeds Brad Horn, who is entering a fellowship program this summer at the University of Florida.

A 2005 graduate of Wesleyan University and a native of Belmont, Mass., Shestakofsky joined the Red Sox in 2007. Most recently, he was liaison with media, players and staff, and led all baseball information efforts. He also made significant contributions to the team’s publications.   Previously, he was with the Lowell Spinners.

END_OF_DOCUMENT_TOKEN_TO_BE_REPLACED

To Enter Hall Of Fame

COOPERSTOWN – Ken Griffey Jr. and Mike Piazza today were elected to the National Baseball Hall of Fame, becoming members 311 and 312 of the Hall of Plaques, the Hall announced.

Griffey and Piazza will be inducted on July 24 in Cooperstown as the Class of 2016 as part of the July 22-25 Hall of Fame Weekend. The Weekend festivities will also feature the presentation of the J.G. Taylor Spink Award for writers to Dan Shaughnessy and the posthumous presentation of the Ford C. Frick Award for broadcasting excellence to Graham McNamee, the Hall reported

Griffey, in his first year on the Baseball Writers’ Association of America ballot, was named on 437 of 440 ballots by voting members of the BBWAA, setting a new record with a percentage of 99.32. The previous mark of 98.84 percent was set by Tom Seaver in 1992.

Piazza, in his fourth year on the BBWAA ballot, was named on 365 ballots – or 83.0 percent of all ballots cast.

Seven-time All-Star closer and owner of 601 saves Trevor Hoffman and eight-time Gold Glove Award-winner Jim Edmonds are among the other newcomers.

SEE DETAILS ON NEWCOMERS AND CURRENT LIST OF CANDIDATES