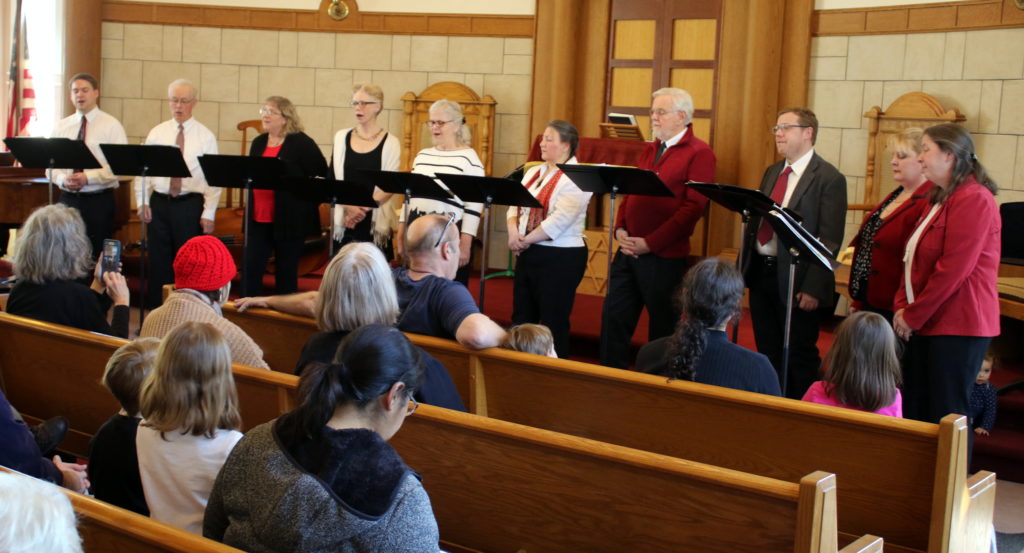 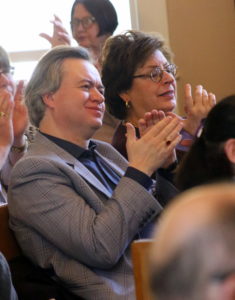 Above, members of Eight is Eneuf sing “Prayer for Peace”, written by Robin Eletsky, Milford, in it’s first public performance at Temple Beth El in Oneonta this afternoon during the Music From Around The World concert to celebrate our shared humanity. Musical guests included Rabbi George Hirschfeld, Ana Laura Gonzalez, Stan Fox and Andy Puritz. Among the audience was Maciej Żółtowski, newly chosen conductor of the Catskill Symphony Orchestra, seen at right, applauding alongside Laurie Zimniewicz, Oneonta. (Ian Austin/AllOTSEGO.com)

END_OF_DOCUMENT_TOKEN_TO_BE_REPLACED

Bank VP, Organist And Sodexo Manager Set To Via In Conductor Contest

The annual concert will feature Mandy Harvey, a Golden Buzzer winner from “America’s Got Talent” as the special guest, and will also mark the debut of Music Director designee Maciej Zółtowski, who was selected as the orchestra’s new conductor after a year-long search.

END_OF_DOCUMENT_TOKEN_TO_BE_REPLACED

“In advance of the first rehearsal, Maciej asked for a roster and he studied it,” said Diane Williams, CSO board chair. “One musician told me that pleased him so much that Maciej knew his name when he called on him.”

The selection of Maciej, the former managing and artistic director of the Radom Chamber Orchestra in Poland, as the orchestra’s music director designee comes at the end of a two-year conductor search, following the retirement of maestro Charles Schneider.

“Chuck conducted for 45 years,” said Williams. “It’s been very different for the orchestra, having three conductors this season, but we felt that Maciej was the best fit. We believe he will transition beautifully and bring his own essence to the symphony.”

In November, Maciej conducted “The Fairy Tale,” the third and final in the conductor search series. Finalists Silas Huff conducting “The Firebird” in September and Carolyn Watson, “The Elements” in October.

The three finalists were whittled down from 73 applicants and six semi-finalists, then the search committee took surveys from both the musicians and the audience.

“The audience liked all of the conductors,” said Williams. “And what we really wanted to know is if they enjoyed the concert and if they would be interested in attending the next season. But the audience did not have one negative thing to say about any of the candidates.”

But weighing more heavily was the survey of the musicians. “Maciej was a very strong candidate not just musically, but the way he was able to work with the orchestra in such a short period of time,” said Williams. “He has a broad experience, and really was the best fit.”

“We think Maciej has a great vision for growing the orchestra in style and skill,” said Laurie Zimniewicz, chair of the search committee. “The musicians had great things to say about all three conductor finalists, but they strongly supported Maciej.”

Four musicians sat on the search committee, who was tasked with compiling both sets of surveys and delivering a list of strengths and weaknesses to the board, who made the final decision.

In addition to the surveys, the candidates were introduced to members of the community, including presidents Hartwick College and SUNY Oneonta and the Glimmerglass Festival, as well as asked to put together a budget for their concert season. “The symphony has to remain strong financially or there won’t be a symphony,” said Williams. “Maciej came in at or under budget.”

Maciej will still need to get a visa before he can officially get the job; until then, he is the designee. He will make his first formal appearance at the CSO’s annual Cabaret Concert on Saturday, March 14, which will also feature the annual Guest Conductor Competition and a performance by Mandy Harvey, a deaf jazz singer who finished fourth on “America’s Got Talent” in 2017.

“He is already excited and has started working with Thomas Wolfe to put things in place for that concert,” said Williams. “He hasn’t selected his pieces yet, but he’ll also be working with Mandy to help pick her pieces.”

“I’m happy we’ve come to the conclusion,” said Williams. “We’re so fortunate that things worked out so well.”

“We think Maciej has a great vision for growing the orchestra in style and skill,” said Zimniewicz. “The musicians had great things to say about all three conductor finalists, but they strongly supported Maciej.”

In addition to Żółtowski, finalists Silas Huff and Carolyn Watson each conducted a concert; Huff conducted “The Firebird” in September and Watson conducted “The Elements” in October.

Żółtowski will make his debut as the music director at the annual Cabaret Concert on Saturday, March 14.

Save A Life This Holiday Season

END_OF_DOCUMENT_TOKEN_TO_BE_REPLACED

Conductor Search: What A Treat, Opportunity

What A Treat, Opportunity

On learning its venerable founding conductor, Chuck Schneider, was retiring after 46 years, The Catskill Symphony Orchestra Governing Board could have simply advertised for a new one, sorted the resumes, interviewed top prospects and made a decision.

Instead of handling matters in-house, the search committee threw open the decision-making to the public; not exclusively, of course, but it encouraged attendees at three concerts this fall – and the musicians, too – to fill out questionnaires assessing each candidates’ strengths.

And what a lesson for veteran concertgoers and newcomers alike, to see three conductors from different parts of the globe – Silas Huff, who rose through conducting the 44th U.S. Army Band, Carolyn Watson from Australia (now in Kansas), and Maciej Zoltowski from Poland – perform widely varying programs in markedly different styles.

“The biggest surprise is: we got 73 applicants – nationally and internationally,” said Laurie Zimniewicz, search committee chair. “We were like, wow.”

So, as you can imagine, all three have terrific credentials. Google them.

•
The conductors designed their own programs and invited in soloists, and each evening was at times gripping, even for the not-so-aficionados/experts among we audience members.

Huff began with Strauss, which swept audience members onto their feet, and ended with Stravinsky’s “Firebird Suite,” another crowd pleaser. He was the most engaging in his remarks from the podium.
Watson was precise, intense, all energy.

Her selections were the most edgy, beginning with Higdon’s percussion-heavy “Fanfare Ritmico.” But if you were surprised at the outset, you were captured by the end.

Zoltowski was Tchaikovsky heavy – two of the three pieces. But what Tchaikovsky! The audience was rapt as pianist Alex McDonald, brought in from Texas, accompanied the CSO on Piano Concerto #1 – an emotional highpoint of the season, for sure.

To see three different conductors at their trade – one each in September, October and November – was a
rare opportunity around here, and mind-expanding.

It was satisfying to learn how the community responded: Attendance grew over the three concerts; subscriptions grew. Doing well by doing good. Nice.

The Search Committee won’t make the final decision, but will present an assessment Dec.10 to the CSO Governing Board, including graphs depicting how the audience and the CSO musicians rated the three.

The plan is to give the most weight to the musicians’ inputs. “Without a happy orchestra, we won’t have an orchestra,” she said, and she has a point.

Still, there’s more to that.

Will a conductor’s taste in music help fill the house? Will he or she be able to reach out to all constituencies – the musicians, yes, but also audiences, the board and, if the institution is to grow and prosper, the community?

Will the conductor be able to think like an executive, to strategize, to identify opportunities and chart the future? And, in doing so, to productively collaborate with CSO President Diane Williams, the Governing Board and Executive Director Thomas Wolfe.

In short, the Governing Board may be guided by others’ perspectives, but in the end, it must make its own decision.

In part, that decision will be with an eye to the future: How to attract a younger audience. As a side benefit, conductor candidates have provided a rich list of ideas on how to do this, Zimniewicz said.

The Catskill Symphony Orchestra, based in Oneonta, was founded in 1973. That’s almost half a century ago. It can be taken for granted. But it shouldn’t be.

At a time when major cities are losing their orchestras, ours continues to thrive. If you haven’t partaken, this is a good time to put a toe in the water.

The conductor should be chosen around the first of the year and will direct the CSO’s annual Cabaret Concert at 7:30 p.m. Saturday, March 14, in SUNY Oneonta’s Dewar Arena. You’ll be glad you did.

ONEONTA – Though the new music director of the Catskill Symphony Orchestra won’t be named until after the New Year, the board of directors already has plenty to celebrate.

“We had nearly a full house for all three shows,” said Diane Williams, board chair. “We saw an uptick in season subscriptions too, because season ticket-holders were invited to all of the pre-show talks the conductors gave.”

On Saturday, Nov. 16, Maciej Żółtowski, the third finalist for the conductor position, conducted Stanisław Moniuszko’s “Concert Overture: The Fairy Tale” and two pieces by Tchaikovsky. Though he had fallen on ice on the SUNY Oneonta campus and dislocated his elbow just days before, he still managed to conduct with both hands.

But with all conductors finished with their concert auditions, the difficult task of deciding who will take the CSO’s baton begins.

“Each of the conductors brought something different to the podium,” said Laurie Zimniewicz, search committee chair. “But in all cases, we saw the musicians stepping up to the plate and putting out incredible music.”

“People really liked Silas’ congeniality; Carolyn had a very different kind of program, and a lot of people said that really stretched the audience,” said Zimniewicz. “And with Żółtowski, how do you not like Tchaikovsky? Plus, he and Silas’ soloists, that they had the contacts to bring that kind of talent here.”

Zimniewicz and the search committee will meet and look over the surveys handed out at the end of each performance to rank and rate the conductors in the areas of pre-show talk, program selection, and whether the conductor engaged the musicians.

“We’ll analyze their strengths and weaknesses,” she said. “We’ll compare to how each of those to the other candidates, and we’ll put the results of each of those onto a graph.”

From there, they will also look at the surveys completed by the musicians, which, Zimniewicz said, will carry more weight than the audience surveys.

“All three were great candidates,” said Ana Laura Gonzalez, piccolo. “We all have our favorites, but no matter which one gets picked, we’ll have a strong conductor.”

She praised Huff’s “personable” nature and detail-oriented conducting, Watson’s “bravery” in her selections and Żółtowski attentiveness to the orchestra.

“He did very little with his hands,” she said. “He used a lot of facial expressions to the orchestra. It was very subtle, but very clear to the musicians.”

The results will be compiled and delivered to the Board of Directors at their December meeting, where they will be tasked with choosing the new conductor.

The conductor will make his or her official CSO debut at the Cabaret Concert on Saturday, March 14. The concert will also feature special guest Mandy Harvey, an “America’s Got Talent” Golden Buzzer winner, as well as the annual conductor competition.