“I am tremendously honored and very grateful,” said Sorin, director of the Cooperstown Graduate School in Museum Studies. “I hope that this book in some small way helps to shine a light on the origins of restricted mobility for Black Americans and their relationship with law enforcement and serves as a call to action that will help to end racial profiling.”

END_OF_DOCUMENT_TOKEN_TO_BE_REPLACED

Don’t Need To Be Babied

“The graduate students are adults,” she said. “They know how to behave. The undergrads are less grown-up.”

Following SUNY Chancellor Jim Malatras’ announcement Thursday, Sept. 3, that the SUNY Oneonta campus would close for the remainder of the semester, students reached out to Sorin, panicked that they also would be sent home.

This was not the case, however, and classes were allowed to continue.

“No one could have expected what happened to happen,” she said. “I was involved with the dean, and I know a lot of planning went into it. I’m sad this happened, but she wasn’t at fault.”

Though CGP classes are being held virtually for the fall semester, students have access to the CGP building, where they can use the printer, scanners, computers and study spaces – but only if they’ve tested negative.

“All of our 47 students have tested negative,” she said.

Students will also be subject to pool testing throughout the semester, and many quarantined even before coming to the county, as well as for 14 days once they arrived.

“So many were afraid that their state would be put on the ‘hot spot’ list, so they went ahead and quarantined at home anyways,” she said. “We sent weekly emails advising students which states were on the list.”

The purpose of the committee is to review nominations for National Historic Landmarks and make recommendations to the board.

END_OF_DOCUMENT_TOKEN_TO_BE_REPLACED

Earlier this month, the Cooperstown community welcomed a group of soldiers from the 403rd Civil Affairs battalion for their monthly training. The visit is part of an ongoing partnership between this unit and SUNY Oneonta’s Cooperstown Graduate Program.

CGP students develop a program about the protection of cultural heritage (think of the Monuments Men during World War II), and the soldiers learn about museum collections and visit the Hall of Fame as well as training with the 42nd Combat Aviation Brigade from the New York Army National Guard, which brings Blackhawk helicopters.

Both the soldiers and CGP students and recent graduates participate in a scenario that requires them to think on their feet about how to care for museum collections in times of conflict.

This training event requires numerous collaborations, and we would like to thank the Clark Sports Center, National Baseball Hall of Fame and Museum, Bassett Healthcare, Clark Estates and Jane Forbes Clark for the use of facilities; members of the Cooperstown Fire Department for preparing hot food at the end of a cold day; John Odell for sharing his knowledge of baseball’s tangible history; and the CGP students who lent their enthusiasm and creativity to make the exercise a success.

We are happy that our community is able to share its many resources with those who serve our country.

COOPERSTOWN — Dick Case, a generations-long columnist at Syracuse Newspapers and a 1967 graduate of the Cooperstown Graduate Program in Museum Studies, died Sunday, Dec. 22, at age 84.  The cause was pneumonia.

He was invited back in 2010 for the annual Bruce Buckley lecture on the topic, “Observations of a Lifelong Storyteller.”

He found stories where others didn’t: “Like gems hidden at the bottom of a mine, they don’t sparkle until you find them and bring them to the light. These are the sort of folks who lit up my life through a career. They own the small stories that don’t make headlines. They rest there, waiting to be mined,” Case wrote in the introduction to a 2009 book of his columns, “Remembering Syracuse.”

Richard G. Case retired in 2013 from The Post-Standard after 53 years in Syracuse journalism.

LWV: Can Democracy Be Achieved Politely? 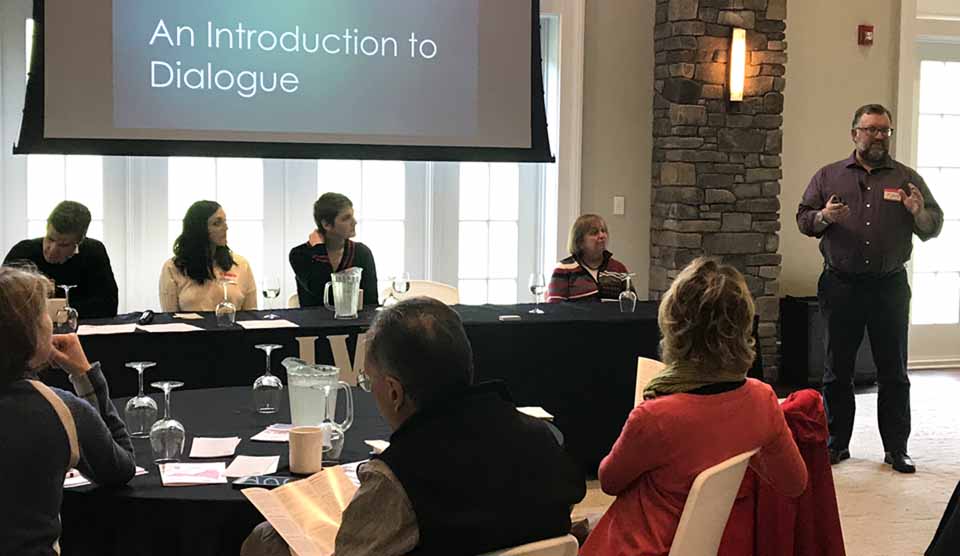 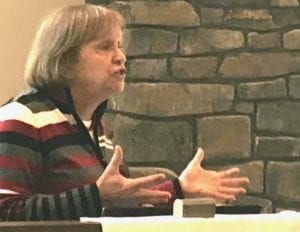 How can we debate the issues of our Democracy in a civil way, particularly in the current atmosphere?  Today, that was the question before “A User’s Guide For Local Democracy,” a morning of presentations and discussion in Springbrook’s Family Center, organized by the Cooperstown and Oneonta chapters of the League of Women Voters.  Tom Pullyblank, above, Catholic Charities director of Planning & Mediation Services, outlined discussion circles – literally, chairs in a circle – and how a moderator can assist a group in reaching a consensus.  CGP Professor Will Walker, seated at left, detailed how open-ended questioning has helped his students elicit valuable and detailed oral histories across cultures. He also introduced students Georgia LeMair and Kirbie Sondreal, seated to his left, who have used Walker’s methods to develop community conversations:  In Cooperstown, for instance, on Women’s Suffrage and the Centennial of the 19th Amendment.  Inset is the New York State’s executive director, Laura Ladd Biermann, who conducted a training session on keeping debates on topic.  “The moderator is in charge,” she said.  “If it gets out of line, you’re the one who has to bring them into line.” Cooperstown’s Maureen Murray and Oneonta’s Steve Londner organized the program. (Jim Kevlin/AllOTSEGO.com)

END_OF_DOCUMENT_TOKEN_TO_BE_REPLACED

HAPPENIN’ OTSEGO for THURSDAY, MAY 10

HAPPENIN’ OTSEGO for THURSDAY, MAY 10

HISTORY – 6:30 p.m. Learn about the Hartwick College Archives, which include the Cooper Papers among other cool items, with Shelley Wallace. Free, Open to the public. Kinney Memorial Library, 3140 Co. Rd. 11, Hartwick. Call 607-293-6600 or visit www.facebook.com/OtsegoIsHistory/

END_OF_DOCUMENT_TOKEN_TO_BE_REPLACED

HAPPENIN’ OTSEGO for TUESDAY, MAY 1

HAPPENIN’ OTSEGO for TUESDAY, MAY 1

END_OF_DOCUMENT_TOKEN_TO_BE_REPLACED

Presentation On ‘Driving While Black’

YOUTH PROGRAM – 2:30 p.m Children will be introduced to the ancient monuments around the world, learn about the cultures that built them, and the group will build their own. Cooperstown Village Library. Call 607-547-8344 or visit www.facebook.com/VillageLibraryOfCooperstown/

END_OF_DOCUMENT_TOKEN_TO_BE_REPLACED

‘Driving While Black’ Film Based On Sorin Research

COOPERSTOWN – A new Ric Burns documentary titled “Driving While Black” will be based on research by Gretchen Sorin, director of the Cooperstown Graduate Program in Museum Studies, on the “Green Book.”

“The Green Book” is a 1937 travel guide listing hundreds of establishments across the South and the nation that welcomed African-Americans.

The book became an essential resource for safe travel in the pre-Civil Rights era. Burns talks about the project and his work with Sorin in this Smithsonian Magazine article

From maple sugar to folk songs, from farming techniques to pierogie recipes, over 1,800 recordings have been collected by the Cooperstown Graduate Program since its founding 50 years ago.

“There’s all kinds of incredible material,” said Will Walker, the associate professor of history who oversees the student research. “These are people’s lives.”

The Oral History collection has been part the Folklore concentration since the CGP opened in 1964 – the 50th anniversary will be celebrated the weekend of Oct. 10-12 by, among others, prominent alumni from across the country – and is now gathered as CGP’s Community Stories. “It’s a community-based project to capture the whole community,” he said. “Doctors, lawyers, farmers, teachers – the list is quite diverse.”

Students also have a chance to reflect on previous interviews. In the 1970s, a group collected recipes from Utica’s Italian and Polish communities. “One of my students recently went back and found family members of those original interviews,” said Walker. “Some of them had moved away, but they still gathered at a church and made those same recipes 30 years later. She brought back the most delicious pierogies I’ve ever had.”

Other students went back and interviewed ice fishermen on Otsego Lake, just as students before them had done. “It’s interesting to hear what students recorded 30 years ago and now.”

The Ingalls family in Hartwick has also been the subject of interviews over the decades, tracing their history from a dairy farm to a roadside farm stand and u-pick on Blueberry Hill.

Former student Henry Glassie, now a “legend” in Folklore studies and a professor at Indiana University, did his oral history on Jesse Wells, a hop picker just as the crop was beginning to decline in the early 20th century. “He was also a musician, so Henry recorded all these songs,” said Walker. “He took these stunning photographs and pasted them on loose-leaf paper in his report.”

The original document is now fragile with age, but photocopies have been made and scanned for preservation. The interviews themselves, from reel-to-reel tape to mp3, are also logged, and many are available for listening on the Community Stories website.

CGP’s founder, the late Louis C. Jones, even told his tales of collecting stories in one student-conducted interview. “Some of those recorders weighed 50, 75 pounds and had to be plugged in – I’ve carried them up mountains, only to find there were no plugs!”

And as the fall semester begins, students are already starting to pick their subjects and practice their interviewing techniques. “So much history is not preserved in the written record,” said Walker. “The only way to capture this history is by talking to people.”