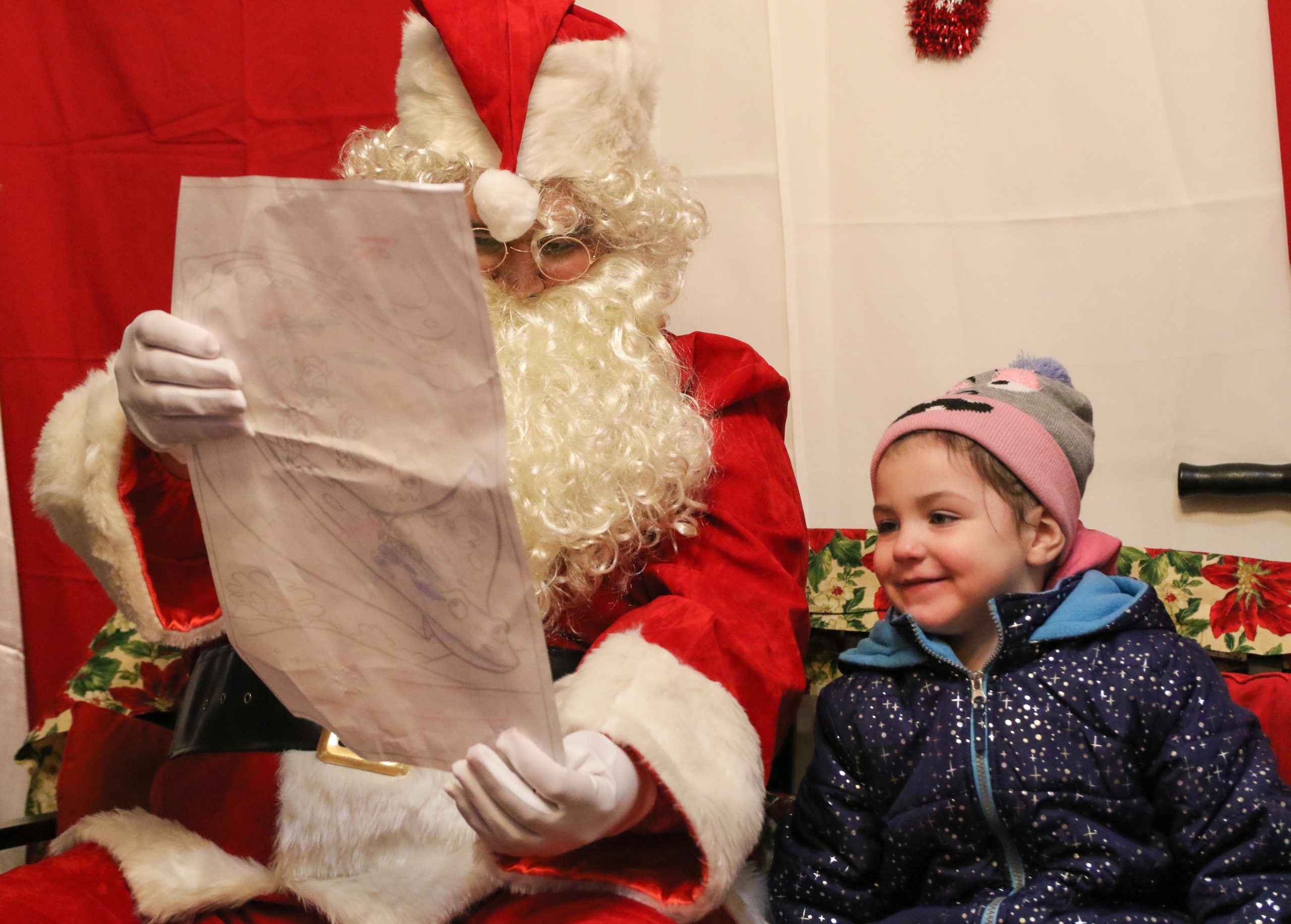 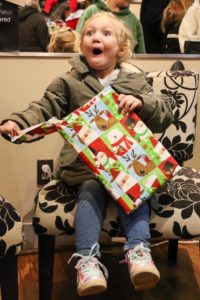 For once, the glove is on the other gift as Isabella Hinkley, 4, Oneonta, gives a drawing to Santa at the “Giving Back to Our Community Christmas” event at the Denim and Diamonds Hair Salon in Oneonta this evening. 20 local businesses donated to the event, which invited children 12 and under to come meet Santa and receive a present.  “Tom always thought that Christmas was about kids,” said Joyce Knuth, who owns the salon with her husband. “Because Oneonta has supported us, we felt that we should do something to give back to the community, but we couldn’t do it by ourselves.” At right, Saige Clark, 4, Unadilla, can hardly contain her excitement as she unwraps her present. “I think that it’s good for kids to be able to come and do these kind of things,” said mom Lacey, who first heard about the opportunity after she saw a poster at the local Head Start preschool program. “It was a surprise, I didn’t tell her until we got here and it turned out great.” (James Cummings/AllOTSEGO.com)

Audience Gets To Sing Along At Annual Catskill Choral Concert 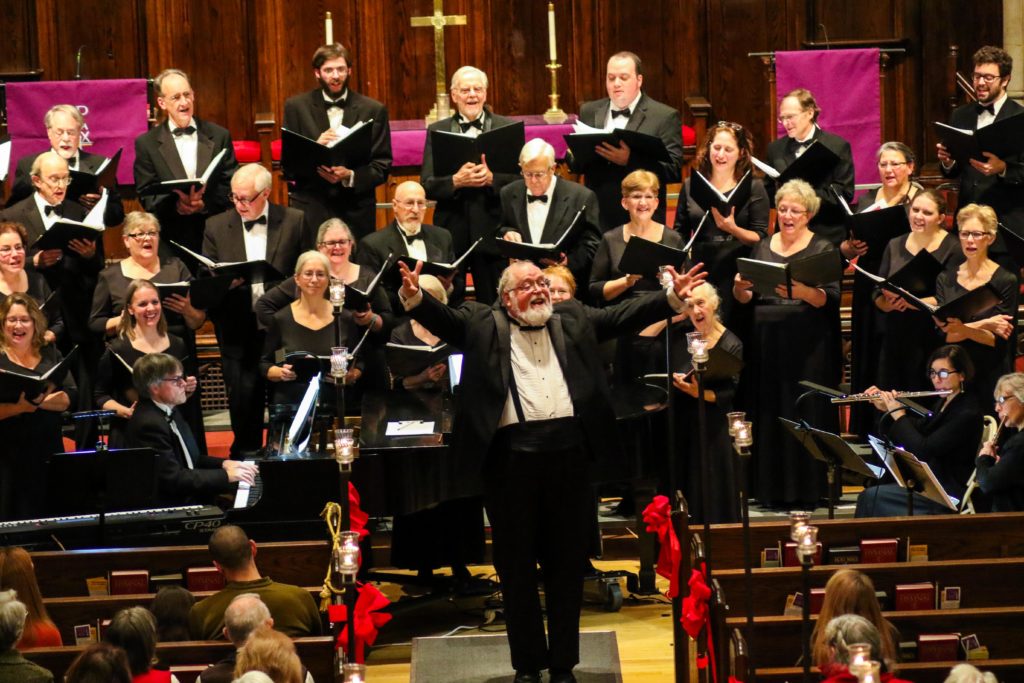 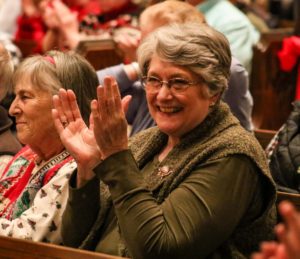 Music Director G. Roberts Kolb encourages the audience to sing along to “Deck the Halls” at a performance of the “Songs of Christmas” by the Catskill Choral Society at the United Methodist Church in Oneonta Friday evening. Kolb, a professor at Hamilton College, has worked with the Catskill Choral Society since 1997 and this is the 12th performance he has directed. Next year marks the 50th anniversary of the society, which brings in approximately 50-80 regional singers to perform a variety of choral pieces twice a year. At right, Mary Hall and her friend Jean Seroka applaud the singers. Hall, who’s been a member of the church for 15 years, attends every performance. “It wouldn’t be Christmas without the Choral Society Concert,” she said. “To me this starts the Christmas season.”

When Santa arrived at his Cooperstown cottage on Friday, Nov. 29, he arrived at the brand-new Pioneer Park.

“The last design I could find was from 1965,” said Mayor Ellen Tillapaugh Kuch. “There haven’t been a ton of changes since then.”

In 2018, the Cooperstown Chamber of Commerce kiosk was updated with a touch screen, and a bike rack and bike repair station were built as part of the $2 million federal grant Transportation Enhancement Program.

But because the park is considered an “urban park,” Tillapaugh said, applications for funding direct upgrades to the space were ignored.

“It doesn’t have a swimming pool or anything,” she said. “So it wasn’t a priority for the state parks department.”

In all, the redesign cost $165,000, and went to bid in June. “When I was chair of the (village) Parks Committee, I built up a reserve of funds,” said Tillapaugh. “This year, we put the remainder of the balance into the budget.”

Michael Haas, Delta Engineering, Endwell, was selected as the architect. “He designed the Lucy B. Hamilton Amphitheater at The Fenimore Art Museum,” she said. “He had done urban parks in Corning as well, so we were very familiar with his work.”

The work began Labor Day weekend – “We never do any work in the summer season,” said Tillapaugh – with Kevin Green of Epic Landscaping doing the work.

“Everything had to be done by Nov. 8,” she said. “That would give us time to clean up and for the 4Cs to decorate for Santa’s arrival.”

And Santa was a big consideration for the design of the park. “We consulted with The 4Cs,” – the Cooperstown Community Christmas Committee – “And we made sure they were in the loop as we did the design.”

Santa’s Cottage, once at the front of the park, has been moved towards the back to allow for more space in the park for the line to form. “Before the move, people would line up on the sidewalk,” she said. “It allows for better flow and for the whole park to function better.”

There is also a ramp to the new stage, which allows greater accessibility to Santa’s Cottage, and a hidden PVC pipe that allows them to set the tree up with ease. “Before, we were just digging a hole and putting the tree in there, then covering it up with dirt when we were done,” she said. “People would trip over it, so now, there’s a manhole cover.”

The stage is also a new addition, proposed in 2018. “Before, we just had blue flagstone space that musicians would set up,” she said. “So we built a stage with a ramp and more outlets for our Music on Main programming.”

And the park will also host a Keith Haring-style mural next summer, in conjunction with an exhibit of the late artist’s work at The Fenimore.

New plant beds with granite borders were installed, and new plants to fill them. “We planted two birches, and we have a London Planetree that we will plant in the spring,” she said.

A water fountain with a bottle fill station was placed in the park with a temporary concrete pad, but has been removed for the winter and will be replaced in the spring with permanent brick pavers.

“It’s not just about Santa,” she said. “The whole park is greatly improved.”