GUILDFORD – A passenger was killed and the driver seriously injured after the car they were traveling in allegedly failed to stop at an intersection and went under a tractor trailer.

According to Aga Dembinksa, Troop C public relations officer, State Police at Sidney responded to the crash at the intersection of State Route 8 and County Road 35 in the town of Guilford at 6:17 p.m. this evening.

END_OF_DOCUMENT_TOKEN_TO_BE_REPLACED

NEW BERLIN –The pedestrian struck by a car on Friday evening near the Unadilla Motorcross Track has died, state police reported a few minutes ago.

A Utica man is being held on DWI and other charges in the incident, which was investigated by troopers from the Oneonta Barracks deployed to the track for a race weekend.

END_OF_DOCUMENT_TOKEN_TO_BE_REPLACED

From Cherry Valley To Richfield

Matthew E. All had led state police on a high-speed chase, which ended at the intersection of 20 and 80 when his Buick LaCrosse collided with the sheriff’s 2017 Chevy Tacoma with Mateunas inside.  The impact was so great it sent the cruiser flying at least 200 feet.

END_OF_DOCUMENT_TOKEN_TO_BE_REPLACED

ONEONTA – Sheriff’s Deputy Jim Mateunas was parked in the westbound lane of  Route 20 in his Chevy Tacoma with his emergency lights flashing when Matthew All, fleeing state police in hot pursuit, plowed into the deputy’s cruiser at 2:45 p.m. Tuesday at 115 mph, according to a just-completed press briefing at the Oneonta State Police Barracks.

Earlier reports had the cruiser on the side of the highway.  There was no evidence All braked or tried to avoid the collision, County Sheriff Richard J. Devlin Jr. and Capt. Scott Hegelke of Troop C’s BCI unit said during the briefing.

The impact of All’s Buick LaCrosse pushed Mateunas’ SUV 200 feet, the equivalent of twice the length of the Oneonta barracks building on Oneida Street.

The autopsy showed All, 23, of Sharon Springs, was not intoxicated.  The briefing revealed All and Robin Church, the woman he was arguing with in front of the Richfield Springs State Police Barracks before the chase ensued, had been co-workers at some point, and he had been “harassing” her for a year.

CHECK BACK BY 3 P.M. FOR FULL STORY

BY JENNIFER HILL • Special to www.AllOTSEGO.com

At around 2:30 p.m. Tuesday, May 21, at the State Police barracks in Richfield Springs, across the street from his house, “I saw him the woman get into her car, a black Jeep, and the man kept shouting at her,” McIvor said when interview at the subsequent accident at Kelly’s Corners, at Route 20 and 80.

“He banged his fist on her jeep and put a dent on the driver’s side. I called 911 when I saw that.”

Less than half an hour later, that man would be dead, the victim of a head-on collision following a high-speed chase that ended when his red Buick Lacrosse ran into an Otsego County Sheriff’s cruiser, injuring Deputy James Mateunas.

According to Trooper Aga Dembinska, Troop C spokesman, the man in a car who had been accused of harassing, then threatening a woman with a knife. When troopers approached, he fled and officers pursued him east on Route 20.

As the fleeing car approached Route 20’s intersection with 80, Mateunas’ cruisher was parked, facing west with its lights flashing.  The fleeing man’s car ran head-on into the cruiser, Dembinska said.

Coroner Michael Fox pronounced the suspect dead at the scene.

END_OF_DOCUMENT_TOKEN_TO_BE_REPLACED

State Police at Norwich were dispatched to a head-on collision at 1:34 a.m., Saturday.

END_OF_DOCUMENT_TOKEN_TO_BE_REPLACED

Of Delaware Agency, Dies In Crash

END_OF_DOCUMENT_TOKEN_TO_BE_REPLACED

In today’s weekly radio report on WAMC, Northeast Public Radio, Jim Kevlin, editor/publisher of www.AllOTSEGO.com (and Hometown Oneonta & the Freeman’s Journal), describes the dedication of the Amy Stock Memorial, a travelling exhibit that dramatizes the pain that can results from DWIs.

After He Was Pinned Under Car

DAVENPORT – State troopers are investigating the death of Travis J. Barra, 18, of Stamford, whose car went over an embankment at 3:19 a.m. today on Brickhouse Hill Road, Town of Davenport.

When arriving at the scene, troopers found Barra pinned underneath a 1996 Ford Crown Victoria.    He was dead at the scene.

An investigation revealed found the car was southbound on Brickhouse Hill Road when it drove off the roadway and appeared to have gotten stuck on the west shoulder.

Barra, who was traveling alone, left the car in neutral as he got out and attempted to free it.  He was pinned underneath the car when it rolled backward.

Delaware County Coronor Dr. Richard Ucci responded to the scene and ruled the manner of Barra’s death as accidental due to mechanical asphyxiation.  The investigation is ongoing.

OTEGO – A husband from Bloomville, Charles W. Turk, 57, was killed when the golf cart he was driving struck a train at about 2:54 p.m. Sunday behind 515 Route 48, Otego, state police announced this afternoon.

When troopers from Oneonta arrived to investigate, they found him underneath the overturned golf cart.  His wife, Cynthia E. Turk, 58, was thrown from the cart and broke both legs, police said.  She was life-flighted to Albany Medical Center with non-life-threatening injuries.

END_OF_DOCUMENT_TOKEN_TO_BE_REPLACED

Who Died Thursday In Auto Accident

COOPERSTOWN – Calling hours are this afternoon for Julia Alexandra Levandowski, daughter, sister, granddaughter, a CCS honors graduate and LeMoyne undergraduate,  who died unexpectedly in an early morning hours Thursday, May 21, 2015. She was 21.

A visitation will be 4-7 p.m. today at the Connell, Dow & Deysenroth Funeral Home, when Julia’s family will be in attendance.

Born Nov. 10, 1993, at Bassett Hospital, Julia was a daughter of Kevin Dwayne Klix and Linda Chapman Levandowski.  During the years she attended Cooperstown Central School she was on the swim team and played flute in the band.  She graduated with Honors in the Class of 2011 and attended Le Moyne College in Syracuse.

END_OF_DOCUMENT_TOKEN_TO_BE_REPLACED

COOPERSTOWN – A former Cooperstown man is charged with vehicular manslaughter and DWI after a single-car crash at 2:13 a.m. Thursday where a 21-year-old Cooperstown woman was killed.

Charged is Brandon E. Lane, 23, now of Prattsville, was operating a 2001 Mitsubishi Galant northbound when the car went off the east shoulder of Route 80, according to state police at Richfield Springs.

The vehicle became airborne and struck a tree on the passenger side on coming to rest, troopers said.   An investigation determined that Lane was driving while intoxicated when he crashed, according to the police report.

Lane’s front seat passenger Julia A. Levandowski, 21, was deceased at the scene.  Otsego County Corner James Dow ordered the body to be taken to Lourdes Hospital in Binghamton for an autopsy.
END_OF_DOCUMENT_TOKEN_TO_BE_REPLACED

20-Year-Old From Massachusetts Driver In Fatal Crash In Richfield 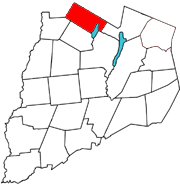 RICHFIELD SPRINGS – Troopers today identified Kaitlin A. Mercier, 20, of Huntington, Mass., as the driver who was killed at 7:30 a.m. Thursday in a single-car crash on Route 20 at Brighton Corners, Town of Richfield.  An autopsy is pending.

Mercier and the single passenger in the car, Amanda Conley, 22, of Brattleboro, Vt., were en route home from a visit to Niagara Falls, police said.  Conley broke her right leg, and was transported to Bassett Hospital for treatment.

The investigation determined that a 1998 Buick was traveling east on US Route 20 when the vehicle drifted into the southbound shoulder and struck the end of the guiderail causing the vehicle to become airborne and then rolled over.

The vehicle came to rest on its passenger side partially submerged in two feet of water in a nearby stream just of the roadway.  Conley was able to exit the vehicle.