The Present State of Rural Economies

The Present State of
Rural Economies

Glimmerglass Film Days this year featured a documentary entitled “Storm Lake” that chronicled the operating of The Storm Lake Times, a small local newspaper in Iowa farm country much like The Freeman’s Journal/Hometown Oneonta.

The community of Storm Lake endured profound changes in the last two decades as the local farm economy declined and was replaced by a very large Tyson pork processing plant that now employs 2,500 mostly migrant workers. The town’s population is about 11,000; its surrounding Buena Vista County about 20,000 in all.

The film cites corporate consolidation of corn and soybean farming and the “vertical integration” of the pork processing business — a fancy term for owning your suppliers — as the primary reasons for an agricultural downturn. Before the consolidation of the pork business, corn and soybean family farmers in Buena Vista County supplemented their crop business with hogs. END_OF_DOCUMENT_TOKEN_TO_BE_REPLACED

Walk with the Glimmerglass Film Days

FOREST WALK – 9 – 10:30 a.m. Enjoy a pleasant stroll and learn about ‘The Forest from the Ground Up’ with Jeff O’Handley. Walk will focus on the forest floor and how it supports everything above. Registration required. In conjunction with Glimmerglass Film Days. Presented by Otsego County Conservation Association. Meet at gate of Clark Tower Trail, Beaver Meadow Rd., Cooperstown. 607-547-4488 or visit occainfo.org/calendar/forests-from-the-ground-up/

END_OF_DOCUMENT_TOKEN_TO_BE_REPLACED

CRAFT FAIR – 10 a.m. – 5 p.m. Kick off the holiday shopping season by supporting local crafters and artisans. There’s something for everyone on the list. Southside Mall, Oneonta. 607-432-4401 or visit www.facebook.com/southsidemall/

END_OF_DOCUMENT_TOKEN_TO_BE_REPLACED

ASTRONOMY – 7 p.m. Join the Otsego County Conservation Association to explore the night sky in04 the autumn. See the milky way, spot Jupiter and Saturn, and see if you can see the Andromeda galaxy. Bring a comfortable chair and blankets. Binoculars helpful, but optional. Come dressed for the weather. Hot chocolate and snacks will be available in the workshop after the viewing. Free, registration required. Mohican farm, 7207 St. Rt. 80, Cooperstown. 607-547-4488 or visit occainfo.org

END_OF_DOCUMENT_TOKEN_TO_BE_REPLACED

Film festival back this week for virtual, in-person events

Film festival back this week for virtual, in-person events

By TARA BARNWELL • Special to www.AllOTSEGO.com

This year’s week-long festival, the ninth annual, reprises the 2020 virtual format but brings back the shared audience experience with the opportunity to view five of the feature-length films in person and view the exhibition “Rising Water(colors).”

“We’re excited about this year’s the films and shorts,” said Ellen Pope, Executive Director of Otsego 2000. “Glimmerglass Film Days 2021 is an environmental film festival. We define our environment to include places we live and the historic fabric around us. The economic life that knits us all together, if you will.” END_OF_DOCUMENT_TOKEN_TO_BE_REPLACED

END_OF_DOCUMENT_TOKEN_TO_BE_REPLACED 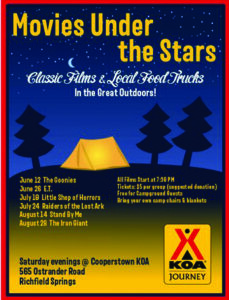 The campground, which is about 20 miles north of Cooperstown, just outside of Otsego County in the town of Warren, Herkimer County, and about a mile from the Route 20 and 80 crossing, will provide socially distanced spaces for families to enjoy outdoor movies during the late spring and summer.

There are six movies in the series, and they will be shown every other Saturday through August. All movies will begin at 7:30 p.m.

The series was programmed by 2014 Cooperstown Central School graduate Joey Katz, who lives in Buffalo, but is the assistant programmer for Cooperstown’s Glimmerglass Film Days and the Boston Jewish Film organization.

Katz said he missed the film-going experience and wanted to find something where coronavirus protocols could be followed. When he found Cooperstown KOA owners Kaaren and Kate were interested in summer events, he said he felt he had to find a way to make the series work.

END_OF_DOCUMENT_TOKEN_TO_BE_REPLACED

COOPERSTOWN – Whenever Gretchen Sorin does an interview for film “Driving While Black,” she likes to consult her own copy of The Negro Motorist Guide aka The Green Book.

“I like to see if there are any places listed where I’m doing the interview,” she said. “But so few of them are extant.”

In Albany, she found, an entire neighborhood had been hidden, buried underneath the Empire Plaza.

“There was Dorothy’s Restaurant and a barber shop on Van Trumpet. I’d never heard of that street.”

“I’ve gotten an enormous amount of fan mail from people – black and white – sharing their experiences with travel. It’s all so compelling, I could write a whole other book!”

This year’s festival, held online, is themed around “The Road Less Traveled,” and films may be viewed on your device from Thursday, Nov. 5, to Thursday, Nov. 12. You can watch individual films for $4 each, or you can buy a $50 pass and watch all the films.

“There’s been so much upheaval in 2020, so highlighting people who go off the beaten path really has become more relevant,” said Ellen Pope, executive director, Otsego 2000, which puts on the festival. “And since we’re not able to travel, we can still see all these interesting places.”

In addition to Sorin, Otsego County is well-represented in this year’s Glimmer-glass Film Days.
Oneonta native Peter Hutchison returns with “Healing from Hate: Battle for the Soul of a Nation” which follows reformed white supremacists.

Both will speak following the films.

The COVID-19 pandemic forced the Film Days to move to a virtual format, where ticketholders are given a passcode to watch each movie on a streaming device of their choice.

To participate, go to glimmerglassfilmdays.org

The 27 films will be available for 48 hours, starting with the Film Days opening film, “The Seer and the Unseen,” screening from 6 p.m. Thursday, Nov. 5 – Saturday, Nov. 7.

There are ways, Pope said, to bring the festival atmosphere home. A “Film Days in a Box” was prepared, containing popcorn, movie-theater candy and local goodies, including a Film Days mask.

“It gives it a fun, festive feeling,” said Pope.

The boxes quickly sold out, but don’t worry if you didn’t get one – Tin Bin Alley is packing up boxes of old-fashioned movie theater candy, and the Green Toad Bookstore will be offering a digital pop-up shop, where you can buy books related to the festival, including “Driving While Black.”

And Alex’s World Bistro and the Hawkeye Grill are offering special themed dinner-for-two menus, including Mexican for “Diana Kennedy: Nothing Fancy” and Japanese food for Werner Herzog’s “Family Romance, Inc.”

END_OF_DOCUMENT_TOKEN_TO_BE_REPLACED 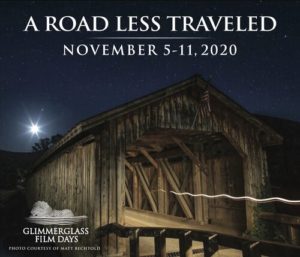 COOPERSTOWN – The annual Glimmerglass Film Days will be presented online this year, with a slate of films scheduled for Nov. 5-11.

“Curator Peggy Parsons and the Film Days Steering Committee are building a slate of films you’ll want to watch, ponder, and discuss,” the committee wrote in a press release. “You’ll meet mavericks, pioneers, dreamers, and doers and hear stories of revival, perseverance, injustice, and the human spirit. We also plan to offer filmmaker talks, a hallmark of Film Days.”