Born Carol Ann Sautin on April 29, 1939, in Brooklyn, New York, she was the daughter of Julius Sautin and Ann R. Sautin (Corso).  She grew up in Brooklyn surrounded by her extended maternal family.  She attended Saint Angela Hall, graduating in 1955.  Growing up, she summered in Howes Cave, New York with her paternal grandmother.  During these summer visits she met the love of her life, Richard (Dick) Gorsin, a longtime resident of Cobleskill.  On September 29, 1957 they were married and settled in Cobleskill to work and raise their family.

While raising her two children and tending to her household she attended SUNY Cobleskill and SUNY Oneonta where she received her Bachelors and Masters degrees in Early Education.  In 1970 she began teaching 6th grade science at Cobleskill Central School and continued, even after relocating to Cooperstown in 1973, until her early retirement in December 1986.  Her innovative, creative teaching style and enthusiasm for a secure, upbeat and comfortable learning environment made her an invaluable educator and grade 6 team member.  She was considered a favorite teacher amongst her students whom still remember having her as their teacher to this day!  Her favorite holiday was Halloween where she would dress up, along with her fellow teachers, for her students and then visit Dick at his bank to entertain the workers and customers alike!

END_OF_DOCUMENT_TOKEN_TO_BE_REPLACED

Harris is rejoicing because he has Margaret to dance with again,  while her family here is left feeling the loss.  Margaret Jane Dubben Yerdon was reunited with Harris on January 18, 2022  at the age of 93,  when she passed away at the home of her daughter.   Margaret was born, the first of four daughters to the late George and Dorothy (Green) Dubben on April 22, 1928 in Cooperstown, NY.  She was raised on the family farm in Middlefield. She first attended school in the Middlefield School House and graduated from Cherry Valley Central School, Class of 1946.  Following graduation Margaret attend Oneonta Teachers College and graduated with a degree in Elementary Education in 1950. On January 27, 1952 she married Harris, at the First Presbyterian Church in Cherry Valley.  Margaret retired in 1997 from Cherry Valley-Springfield Central School after teaching (Elementary and Remedial Reading) for 45 years where she was involved with student teachers, the Cherry Valley-Springfield School merger study in 1985, served as the CV-S Elementary Coordinator, and PARP Coordinator.  For many years Margaret sold tickets at basketball games on Tuesday and Friday nights.  Following her retirement Margaret continued to enjoy social events, her grandchildren’s events and gardening at her home . Her flower and vegetable gardens received much attention and garden produce was properly preserved.  Her pickles were the best.

Those who were in Cherry Valley on Halloween will always remember the Main Street Witch, which Margaret enjoyed playing for 50+ years.  Generations always made a point to stop in at her house to see Mrs. Yerdon.

END_OF_DOCUMENT_TOKEN_TO_BE_REPLACED

Trick or Treating was already underway on Main Street Cooperstown when the Halloween Parade kicked off at 5 p.m. Lead by a police car the first down the street were members of the Cooperstown High School Band performing a rendition of horror classic ‘Jaws’ theme, their first performance since winter 2019. Following them was an absolute hoard of children and parents which filled the street with everything from Princesses and goblins to post office boxes and garden soil.

TRICK OR TREAT – Noon. Kids are invited to join Destination Oneonta to trick or treat at participating businesses and then be wowed by the Ghoulies and Ghosties of the Halloween Parade. Main Street, Oneonta. 607-432-2941 or visit www.facebook.com/DestinationOneonta/

VIRTUAL TOUR – 10:30 – 11:30 a.m. Get the family together to explore the exhibit ‘Believe in Yourself: What We Learned From Arthur.’ See original illustrations spanning the career of Marc Brown, the creator of the Arthur Adventure Book series which became the popular television show ‘Arthur.’ See his pencil drawings, learn about the storyboarding process, and see clips from an interview. Free, registration required. Suggested donation, $10. Presented by The Fenimore Art Museum, Cooperstown. 607-547-1400 or visit www.fenimoreartmuseum.org END_OF_DOCUMENT_TOKEN_TO_BE_REPLACED

PUMPKIN GLOW – 6 – 7:30 p.m. Take a stroll through the park, lit by Jack-O-Lanterns on the Friday before Halloween. Admire the creativity of your neighbors and vote on your favorite. Carved pumpkins must be dropped off before 5 p.m. The theme this year is ‘your favorite spooky story.’ Participants receive prizes for the People’s Choice Award and the best pumpkin that fits this the theme, and a chance to win a $50 gift card. You can also request a free pumpkin to carve and display in the park. Huntington Park, Oneonta. 607-432-1980 or visit www.facebook.com/hmloneonta/

END_OF_DOCUMENT_TOKEN_TO_BE_REPLACED

Whether in person or virtual, creepy or not, Otsego County has several events lined up for Halloween weekend 2021. So, get ready to activate your inner ghost or goblin and have Halloween fun your way with these events. END_OF_DOCUMENT_TOKEN_TO_BE_REPLACED

END_OF_DOCUMENT_TOKEN_TO_BE_REPLACED

COOPERSTOWN  – An Oneonta man, whose violent altercation in Unadilla ended in a stabbing and the victim having to be taken by helicopter to a medical facility, appeared in Otsego County court Monday, May 24, to face charges of assault in the first and second degree.

Richard Gantt voluntarily agreed to be interviewed by state police, according to testimony.

“I was called because it was a serious case,” Jeremy Hicks, investigator for the New York State Police, said via video in the courtroom.

The confrontation which led to the stabbing occurred on Sunday, Oct, 18, 2020, at a Halloween party, with Logan Kabana of Oneonta.

Gantt, who is Black, claimed during the police interview that Kabana had made racial remarks, leading to the fight.

However, Kabana said during the proceedings, that he had been hanging out with Gantt and did a shot with him when he made a remark that somebody who was hanging out near the fire pit was a serial killer and was going to get Gantt. This allegedly caused Gantt to fly into a rage and resulted in Kabana being assaulted and stabbed.

The next day, Kabana picked out Gantt from a photo array and police sought out Gantt’s girlfriend, who works at Springbrook, and eventually got him to come down to the state police barracks in Oneonta, where he was read his Miranda rights.

Lambert at one point warned an observer in the courtroom, who was shaking their head demonstrably in reaction to an overruled objection, to no longer do that or they would be removed from the courtroom.

There was no return court appearance set, but Lambert predicted they would convene again in about a month. 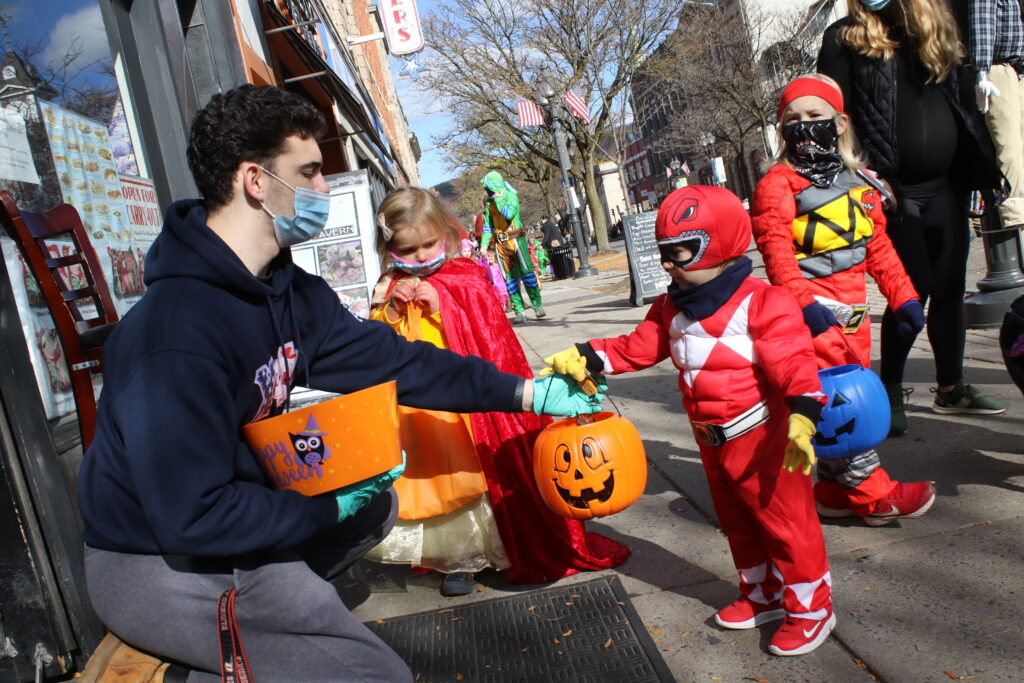 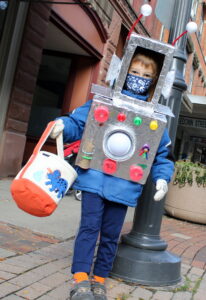 While the annual Halloween parade may not be on, that gave throngs of ghouls, ghosts, superheroes and princesses all the more reason to head downtown for the annual trick-or-treating event on this afternoon on Main street in Oneonta. Above,  Brendan DeFalco, a brother with Chi Phi fraternity, hands out candy outside Tokyo Japanese Cuisine to Oneonta’s Reese Robinson and Rowan and Wyatt Keto. At right, Benjamin Reese shows how to walk like a robot in his homemade robot costume. College students were invited downtown to help hand out the candy in front of local businesses as part of the renewed Town-Gown work groups, part of the city’s Survive, Then Thrive initiative. (Ian Austin/AllOTSEGO.com)

END_OF_DOCUMENT_TOKEN_TO_BE_REPLACED

TRUNK OR TREAT – 4 p.m. Decorate your cars and bring the kids for fun activities from building a spider, pumpkin carving, make a ghost, and of course collecting candy. All stations are sanitized, 6 feet apart. The Railroad Inn, 28 Railroad Ave., Cooperstown.

END_OF_DOCUMENT_TOKEN_TO_BE_REPLACED 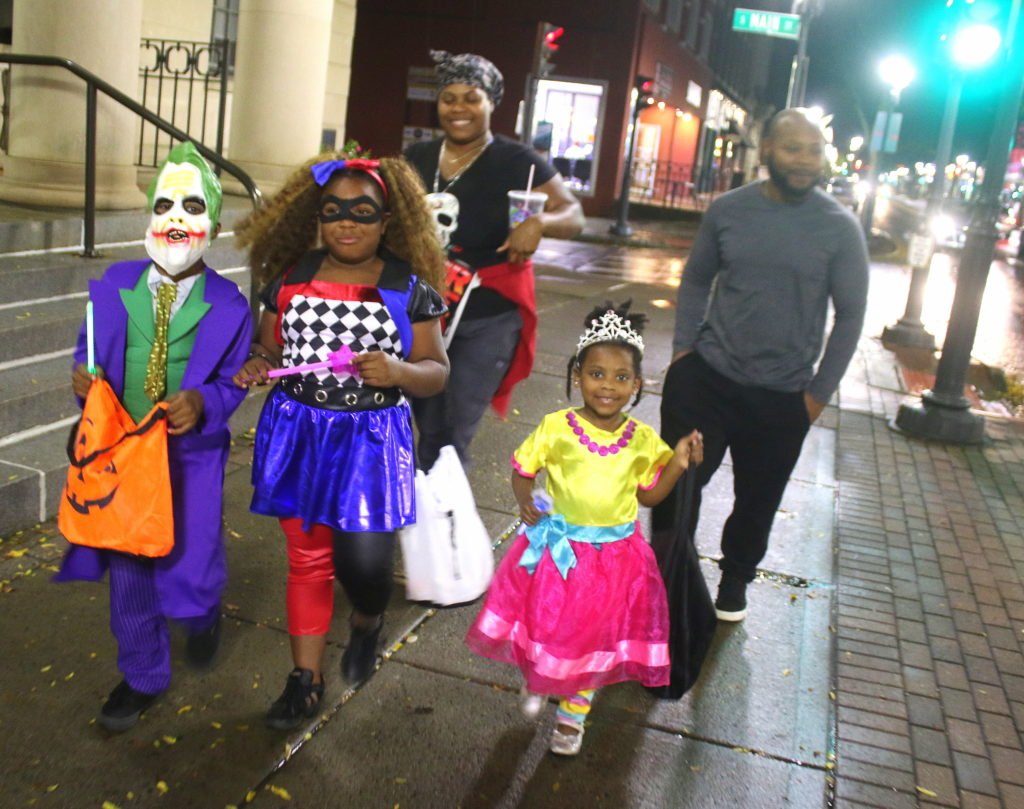 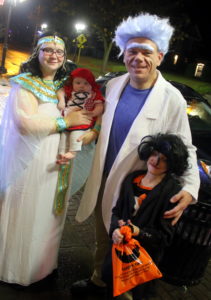 Erratic rain throughout the evening led to the cancellation of Oneonta’s annual Halloween parade, but all manner of ghouls and ghosts made their treat-seeking rounds at local homes and businesses this afternoon and evening. Above, Devin El, Leilani El and Ziyen Giles passed City Hall on their treat-hunting mission, with Lizzette Hopkins and Edward Giles, Maryland, in tow. Inset at right, Oneonta’s Jessica and Paul Benzaleski arrive downtown with their children Adalia and Reilly ready to take home some sweets.(Ian Austin/AllOTSEGO.com)