Full disclosure: I’m finding it challenging to give any gravity to something called “monkeypox.” It sounds like a vintage video game, like “Donkey Kong,” and I half-expect the symptoms to include an uncontrollable urge for a banana. I don’t want to think about monkeys being anything that carry a nasty Pox that apparently can do some pretty ugly damage to those who contract it.

Says the Associated Press: “Monkeypox typically begins with a flu-like illness and swelling of the lymph nodes, followed by a rash on the face and body. In Africa, people have been infected through bites from rodents or small animals, and it does not usually spread easily among people.”

At least there’s that. I shouldn’t be glib about it. We’re starting to hear the vague warnings that we had better prepare ourselves for all things monkey and/or pox. Get our go-bags packed up and ready to go. The second coming of the vicious gangs of murder hornets that were supposed to descend on us two summers ago. But didn’t.

A public buffeted by COVID guidance, mandates, warnings, cautioned – however well-intentioned and however accurate – looks to be generally done with it. Otsego County has seen an increase in the number of cases of late, enough so that we’re currently in the CDC’s “high” community level designation, so the CDC recommends that we “wear a well-fitting mask indoors in public, regardless of vaccination status.”

A random, non-scientific walk around Cooperstown and Oneonta, though, finds that compliance with that red-level recommendation is pretty much hit-or-miss these days, a mandate-weary public END_OF_DOCUMENT_TOKEN_TO_BE_REPLACED

Otsego County is seeing the highest surge in COVID-19 cases since the start of the pandemic, the Otsego County Department of Health (DOH) said in a statement Thursday.

“It is critical that everyone take responsibility to reduce the spread,” Otsego County DOH Public Health Director Heidi Bond said. “We know that social distancing, wearing masks, and getting vaccinated works. Please stay home if you are not feeling well.”

According to the Otsego County DOH , active cases are no longer going to be recorded because it is not possible to get an accurate number with limited contact tracing and case investigation. END_OF_DOCUMENT_TOKEN_TO_BE_REPLACED

Public Health Director Heidi Bond told the January 5 Otsego County Board of Representatives her office is pushing New York State to speed up delivery of results from its Milford COVID testing facility as virus cases in the county go “through the roof.”

“Results come back within six or seven days and it should only take two,” she said in a virtual address to the Board. “We’re pushing the state to push the contractor to rectify that.”

“We’re trying to move to where the County Department of Health notifies people of their test results,” she said of the Milford logjam. END_OF_DOCUMENT_TOKEN_TO_BE_REPLACED

Update: 71 new cases were reported today, according to the Otsego County Department of Health. There are 359 active cases with 10 hospitalizations. No new deaths have been reported.

“It is critical that everyone continue to curb the spread of COVID-19,” she said. “We know that social distancing, wearing masks, and getting vaccinated works. Please continue to take the proper precautions to protect yourselves and those most at risk and get vaccinated.” END_OF_DOCUMENT_TOKEN_TO_BE_REPLACED 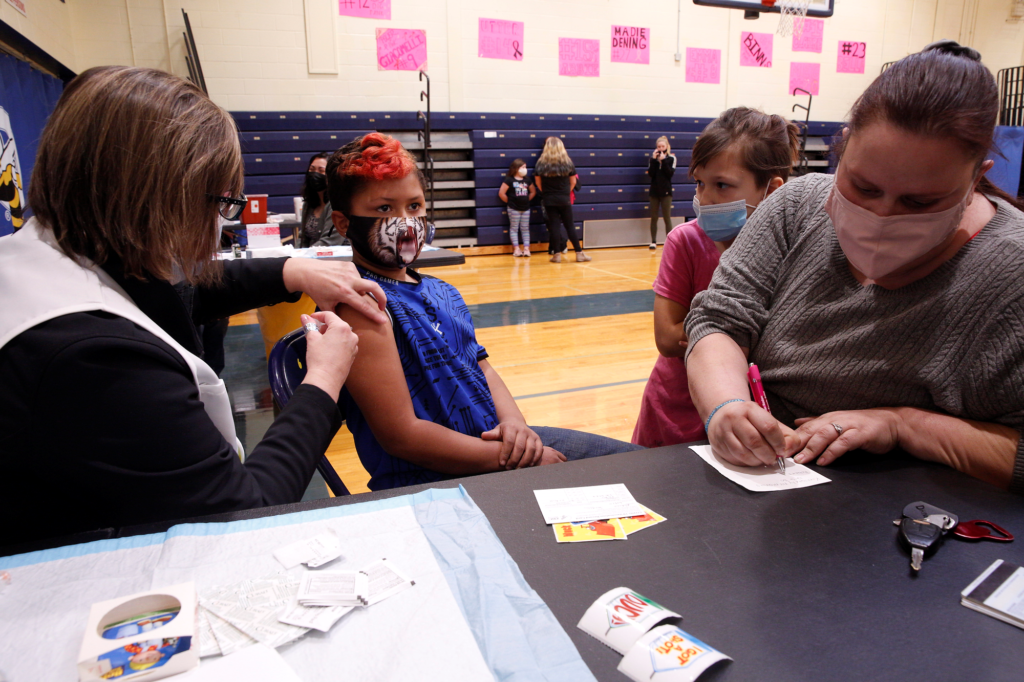 With 39.5 percent, or 23,588 of our Otsego County neighbors, having received at least one shot of a COVID-19 vaccine, the focus is turning to people who are adamant about doing without.

About 25 percent of us, 16,242, have completed the two shot-cycle. (Tuesday, April 13, Governor Cuomo suspended use of the one-shot Johnson & Johnson option.)

“Anybody who’s refusing to get a vaccine is perpetuating the pandemic,” county Public Health Director Heidi Bond said bluntly. “We know the vaccine works. It works well. It’s safe. Now’s the time to really up your personal responsibility and get vaccinated.”

As reported in this newspaper two weeks ago, Springbrook is offering a $500 bonus to overcome workers’ resistance to vaccinations. But not everybody has that option.

In an interview in recent days,Lacey Rinker, Cooperstown Center director of nursing, said 44.5 percent of the nursing home’s staff is “fully vaccinated,” but 44.5 percent “declined.”

Part of the reason, she said, is “misinformation,” but others “are concerned about the long-term effects of vaccines that were rushed to market. What will happen six years from now?” they ask.

END_OF_DOCUMENT_TOKEN_TO_BE_REPLACED

Vaccines Are Here. Keep Trying. You’ll Get Your Shots

Vaccines Are Here.
Keep Trying. You’ll Get Your Shots

Yes, indeed, all the signs are good.

Earlier this week, Heidi Bond, Otsego County public health director, said, “I think it will open up pretty quickly with Johnson & Johnson,” a reference to the new one-shot vaccine approved over the weekend.

It’s even encouraging to read the daily reports in the doom-and-gloom national newspapers.

As of that day, WAPO said 50 million Americans had been vaccinated, about the same number of us over 65.

After the state website kept complaining the whole State of New York had only been receiving 400,000 vaccines a week for its 16 million eligible citizens, Monday, March 1, it posted:

That, plus 400,000 a week we’re already getting: It would still take 80 weeks to serve New York’s eligible citizens, but it’s accelerating.

END_OF_DOCUMENT_TOKEN_TO_BE_REPLACED

COOPERSTOWN – Deaths from COVID-19 rose sharply in Otsego County in January, following about a week behind a peak in active coronavirus cases.

Sixteen Otsego County residents died from coronavirus-related causes in January and 10 to date in February, the county health department confirmed today. There were 19 COVID fatalities from the county in all of 2020.

For 12 consecutive days starting Jan. 17, the number of active cases among Otsego County residents exceeded 200. This had only happened once previously, in early September during the height of the SUNY Oneonta outbreak.

END_OF_DOCUMENT_TOKEN_TO_BE_REPLACED

COOPERSTOWN – The daily count of active COVID-19 cases has been steadily declining for the past two weeks, according to county Public Health Department Heidi Bond’s latest report.

The county’s positive rate was 1.7 percent on Friday and the seven-day average was 2.7 percent.

There were 743 cases reported in January 2021.  Of that total, 6 percent are college students, 4 percent are healthcare workers, 13 percent live in nursing homes, and 12 percent are students or staff in K-12 classes.

END_OF_DOCUMENT_TOKEN_TO_BE_REPLACED

COOPERSTOWN – The COVID-19 death toll continues to climb. Why? According to Public Health Director Heidi Bond, the fatalities are still largely related to the holidays, including as far back as Thanksgiving.

“A lot of these people were those that were hospitalized for a long period of time,” Bond said today.

One ongoing cluster remains active at a nursing home within the county that has yet to be disclosed.

END_OF_DOCUMENT_TOKEN_TO_BE_REPLACED

In a single day, reported county-wide cases have climbed by nearly sixty increasing the active case count to 210 and the hospitalizations by three for a total of 18.

No new COVID-19 related deaths have been reported, keeping the 2021 fatalities at three and the fatalities to date at 21.

Based on the figures, more than twenty people have successfully completed isolation and are considered no longer contagious. That said, the newly reported cases are more than three times higher than that of the same category only a mere 24 hours ago. END_OF_DOCUMENT_TOKEN_TO_BE_REPLACED

The Otsego Department of Health helped to vaccinate roughly 200 eligible tier 1a and 1b candidates at the Meadows Building on Monday, Jan. 11, 2021.

According to County Department of Health Director Heidi Bond, they are hoping to roll out additional clinics soon.

Those interested in receiving the vaccine should visit: am-i-eligible.covid19vaccine.health.ny.gov/

COOPERSTOWN – COVID-19 is still coming at us.

A few minutes ago, county Public Health Director Heidi Bond reported two more coronavirus deaths, in addition to the one reported yesterday.  The in-county total is 20 since the pandemic threat arose last March.

END_OF_DOCUMENT_TOKEN_TO_BE_REPLACED

After burgeoning since Thanksgiving get-togethers, the number of active cases county-wide have suddenly dropped by 31 in a single day.

Despite 10 new cases and 19 hospitalization of either new or ongoing cases being reported today, the total active cases as of Tuesday, Jan. 5, was 126, 30-plus-one lower than the day before.

Most likely, the drop is due to successful quarantines, said county Assistant Public Health Director Kim Schlosser, in charge while Director Heidi Bond is out of the office for a few days.

“Ten days after testing positive, the individual is considered to be negative for the virus,” Schlosser said.

And 10 days ago, local positive COVID cases saw a significant spike and, after successful quarantining, those individuals are now in the clear, she said.

Hospitalizations have also declined by two in the last 24 hours and no new deaths have been reported as of Dec. 29.

“For whatever reason, it seems some people are responding to treatment,” Schlosser said, although she wasn’t aware of any changes in COVID treatment.

It remains to be seen if the Christmas Holiday will result in a spike, as was experienced after Thanksgiving.

“We believe we’re still really only dealing with the aftermath of Thanksgiving at this point,” Schlosser concluded.