Confirmed Covid-19 cases are rising faster than ever

Lara Trump rips Biden on Floyd 'pandering': Ex-VP has done 'nothing' for African-Americans

Some NYC looters make off with luxury items from Dior, Chanel, more: report

NYPD says 292 officers injured during George Floyd protests, as police across US come under siege

Police should be in local or state control, not federal, House judiciary panel member says

State Of State Includes Senator, Both Mayors, Chair Of County Board

Chair Of County Board

ONEONTA – The Otsego County Chamber of Commerce today announced the lineup for its annual State of the State Breakfast, scheduled as it’s been traditionally done on the day after New Year’s Day.

END_OF_DOCUMENT_TOKEN_TO_BE_REPLACED

WEST ONEONTA – The Oneonta Town Board has scheduled a public hearing for 7 p.m. Wednesday, Nov. 14, after which it can vote to create a new fire district, ending more than two years of uncertainty on whether 80 percent of the town would continue to be served by the city’s paid, fulltime Oneonta Fire Department.

Town Supervisor Bob Wood said he and city Mayor Gary Herzig took “an hour and half” of negotiation to reach a new fire contract between the town and city, an achievement that had eluded the now dissolved town Board of Fire Commissioners for more than two years.

END_OF_DOCUMENT_TOKEN_TO_BE_REPLACED

For Oneonta’s Cost To Host SUNY

ONEONTA – For a second year, state Sen. Jim Seward, R-Oneonta, has obtained “impact aid” – $194,500 this budget year – to offset public safety costs to the City of Oneonta from being a host community to a SUNY college.

“Our SUNY schools are a real asset – educating our future leaders, and helping drive the local economy,” said Seward in an announcement this afternoon.  “However, there is a financial trade-off that goes overlooked and local taxpayers should not be left holding the bag.  The SUNY Impact Aid funding is genuine mandate relief.”

END_OF_DOCUMENT_TOKEN_TO_BE_REPLACED

ONEONTA – Due to “the extremely large amount of snow” on city streets, Mayor Gary Herzig announced this afternoon that on-street parking it banned “until further notice.”

City parking lots and the parking deck regulations will be suspended during this period, to allow car owners to park there 24 hours a day.

END_OF_DOCUMENT_TOKEN_TO_BE_REPLACED

STATE OF STATE IN ONEONTA 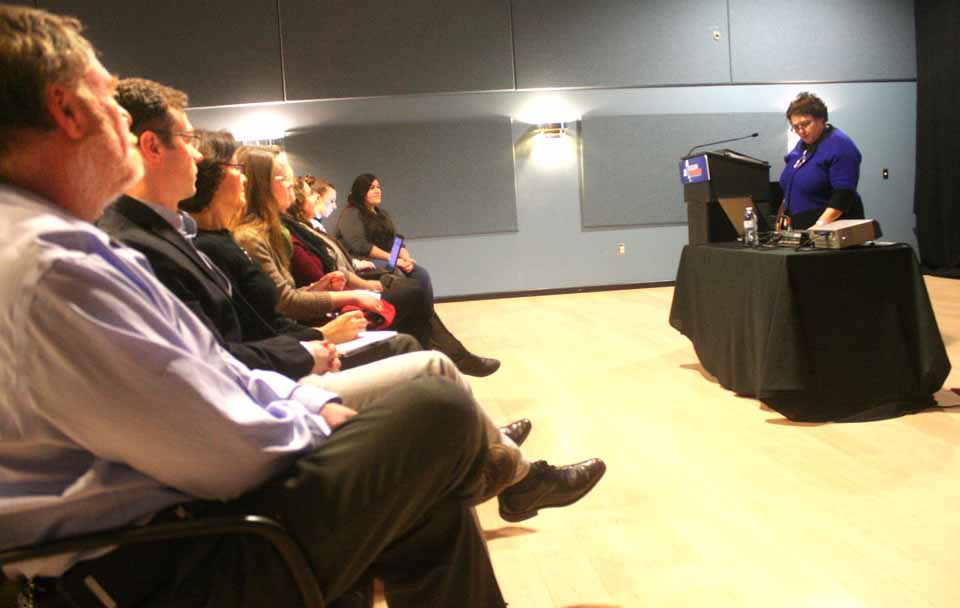 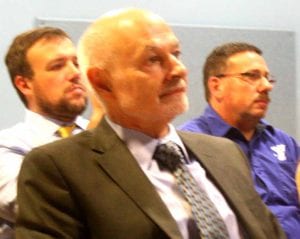 With Governor Cuomo’s six-stop statewide tour to deliver his State of the State speech complete, his commissioners today fanned out to New York’s smaller cities to give slide shows and answer the questions of local audiences, as RoAnn Destito, state Office of General Services commissioner, did for 50 elected officials, businesspeople and SUNY Oneonta President Nancy Kleniewski and her team members at Foothills in Oneonta this afternoon.  Listening, top photo, are, from left, Oneonta Town Supervisor Bob Wood, and Common Council members David Rissberger and Melissa Nicosia.  In photo at left, Mayor Gary Herzig listens to the presentation, in which the $10 million in state Downtown Revitalization Initiative money to Oneonta was mentioned several times.  Behind Herzig are County Rep. Andrew Marietta, D-Cooperstown/Otsego, left, and Oneonta Family Y Executive Director Frank Russo.  (Jim Kevlin/AllOTSEGO.com)

“It’s a loss for Oneonta,” the mayor said of the news that Nayor will become director of research, development and training at the state Association of Police Chiefs, “but a gain for the rest of the state, who will have the opportunity to learn from him.”

Earlier this morning, the city announced that Nayor would be stepping down as chief in January 2017, a position he has held since 2012.  “He has really created a department that is a shining example of how a police department should operate,” said Herzig.

END_OF_DOCUMENT_TOKEN_TO_BE_REPLACED

Oneonta’s “food hub” is a go with today’s announcement that a $3 million CFA is en route from the Cuomo Administration.

“I’m delighted with the results,” said Oneonta Mayor Gary Herzig.  “This award assures that the project – one of the primary anchors of the Downtown Revitalization Initiative – will progress in a timely manner.”

The money will allow construction to begin, perhaps as soon as spring, on what’s officially called the Susquehanna Regional Food & Beverage Hub at Chestnut and Market streets in Oneonta, site of the former Oneonta Ford.

Another winner of the coveted CFA grants, the Cuomo Administration’s vehicle for distributing economic-development funding, was the Village of Cooperstown, which won $120,000 for continue restoration to Village Hall, including making the building ADA compliant.

END_OF_DOCUMENT_TOKEN_TO_BE_REPLACED

OUR Tree at Rockefeller Center

CHECK BACK THROUGH THE EVENING

FOR MORE ON LIGHTING ONEONTA TREE

OUR Tree at Rockefeller Center

Under Shadow Of Big Spruce

CHECK BACK THROUGH THE EVENING

FOR MORE ON LIGHTING ONEONTA TREE

ONEONTA – Governor Cuomo couldn’t make it, called away from a City of the Hills appearance by a collapsing crane on the Tappan Zee Bridge project.  But he sent the check.

In making the announcement, Zemsky said this city’s application – it was championed and fast-tracked in May by Mayor Gary Herzig, assisted by Otsego Now President Sandy Mathes and his staff – had it all:  an affordable housing piece, a downtown strategy, an entertainment piece (in Foothills Performing Arts Center), and an overriding concept – the “food hub” initiative.

END_OF_DOCUMENT_TOKEN_TO_BE_REPLACED

Oneonta To Compete For Whole $10 Million

Will Put City Over ‘Tipping Point’

ONEONTA – Mayor Gary Herzig this evening announced the City of Oneonta will be submitting an application by the 4 p.m. deadline next Tuesday seeking the whole $10 million Governor Cuomo has designated for downtown redevelopment in the Mohawk Valley.

Speaking at the annual meeting of the League of Women Voters, Oneonta chapter, Herzig said the City of the Hills “has been pushing a boulder up a hill … When you get to the top, it only takes a little push to get it over the top.”

Oneonta is at “a tipping point,” he said.

The $10 million, he said, is that little push, all that Oneonta needs to move dramatically forward, to leverage private investment to address the city’s two key needs:  more good-paying jobs and sufficient housing, now lacking “at every income level.”

END_OF_DOCUMENT_TOKEN_TO_BE_REPLACED

He Backs Off Some Divisive Charter Issues,

They were contained in a memo to Common Council that he made public today.  The memo will be discussed at the Tuesday Council meeting at 7 p.m. in City Hall.

On another contentious issue – whether the charter should be changed to allow a mayor to cast a vote on selecting a city manager – Herzig said he would accept the status quo.