Ethics Complaint Against Richfield Board Dismissed

With One Page Lacking, Oversight

RICHFIELD SPRINGS – The first complaint ever filed with the Town of Richfield Ethics Committee was dismissed this evening after the three members agreed there was insufficient content in the record for them to make a determination.

Ethics Committee chairman Kane Seamon, who lost his seat on the town board last November, said Reid can.

END_OF_DOCUMENT_TOKEN_TO_BE_REPLACED

At Fiery Meeting, Town Board At Loggerheads In Richfield

At Fiery Meeting, Town Board

At Loggerheads In Richfield

RICHFIELD SPRINGS – Oneonta attorney David Merzig has determined the Town of Richfield’s new – and disputed – zoning code might not survive a court challenge.

And the town board plans to meet at 7 p.m. Monday, Feb. 17, with new Town Attorney Peter Hobaica to determine whether and how to set it aside and perhaps start anew, said newly elected Town Supervisor Nick Palevsky.

The plan, which envisioned the town as mainly agricultural and residential, led to the election of Palevsky and two allies, Fred Eckler and Ed Bello Jr., last Nov. 5.

Casale said today’s final count at the county Board of Elections was 366-355, giving Palevsky an 11-vote margin over independent David Simonds.

His victory means control of the town board passes from council members associated with Protect Richfield, which formed to resist the Monticello Hills Wind Farm and championed a comprehensive plan and zoning code that envisioned the town as consisting of farms and houses.

Along with incumbent Fred Eckler, who was reelected Nov. 5, and  newcomer Ed Bello Jr., it is likely the new Republican board will revisit the plan and zoning code that was approved by the Protect Richfield bloc in September.

“I hope it holds,” said the prospective supervisor, noting it’s only five votes and there are 100 absentee ballots out there.  “That’s the only thing I can say right now.”

In the lead-up to the Richfield Town Board adopting a new Comprehensive Plan & Zoning Code, people said they want to see the town come together.

People observed that “nothing’s happened” in the Richfield Springs area in the past 20 years (or longer).

People mourned the decline in enrollment of the Richfield Springs Central School, which graduated 29 seniors on June 29.

These emotions are easily understood.

But to conclude, as some did, that the town’s new comp plan and code, hatched without the knowledge of the community at large with special interests in mind, will accomplish any of those things is likely mistaken.

While polite, meetings leading up to the final decision – a public hearing Sept. 23 on the zoning code, and the town board meeting Sept. 30 where members of a clique, 3-2, jammed through the undigested document – were angry.

The reasons have been spelled out in our news pages: West End neighbors, their lawsuit against the five-turbine Monticello Hills Wind foiled, took control of the process of revising the comp plan and zoning code.

By the time the community at large became aware of what was going on, the neighbors controlled the Zoning Commission, the Planning Board and three of five seats on the Town Board.

In addition to banning wind turbines, and original comp plan virtually prohibited any development along Route 20, the major commercial thoroughfare through the town.

After an outcry, and more measured inputs by people like Andela Products President Cynthia Andela, that was revised.  On the whole, though, the plan pushed through Sept. 30 envisions the Town of Richfield’s future as agricultural – as dairying disappears – and residential.

That ensures “nothing” will happen, new people won’t move in, commerce will remain stagnant, school enrollment will continue to ebb.

They deserve voters’ support Tuesday, Nov. 5.  Polls will be open 6 a.m. to 9 p.m. in the town and across Otsego County, where local elections will be held.

If elected, a first step being considered would be to revisit the petitions signed by landowners in the town to require a super-majority – a 4-1 vote – to pass the zoning code.  If found valid after all, and Sept. 30 vote is moot.  The code is no more.

If that happened, it would have to be just the beginning.  A process – the particulars are unclear; this is a rare occurrence – would have to be pursued to come up with a new comp plan and zoning code that truly reflects the widest possible consensus among townsfolks.

Done correctly – not by any special-interest group, but by community leaders guided by only the good of the whole – a new broad-based plan might very well achieve what everyone wants.

That’s a community that’s come together, not torn apart, where “something” can happen in terms of jobs and commerce, where RSCS will indeed flourish again.

By JIM KEVLIN• Special to www.AllOTSEGO.com

Monday, Sept. 30, after two somewhat acrimonious hours of discussion, the Richfield Town Board, 3-2, approved a new zoning code that bans wind turbines and defines most of the town as agricultural/residential.

END_OF_DOCUMENT_TOKEN_TO_BE_REPLACED 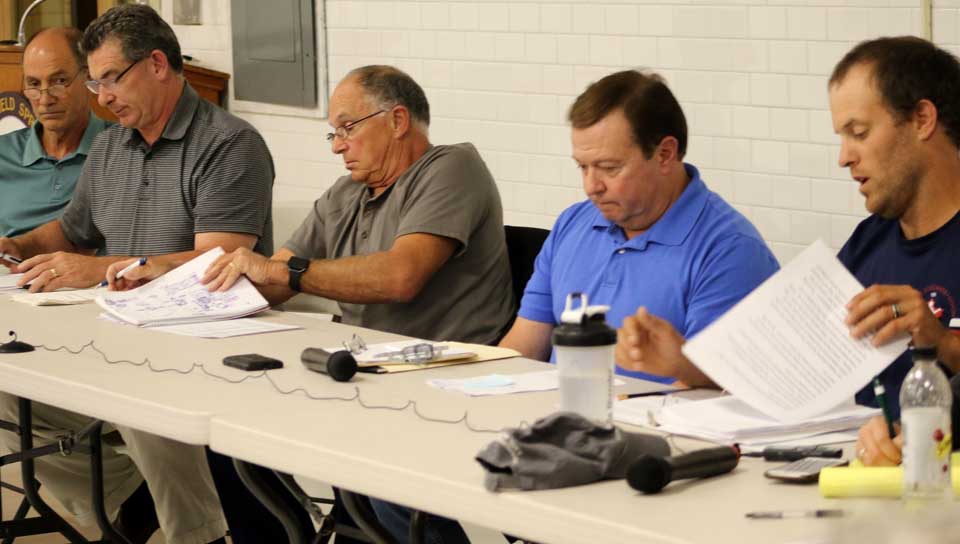 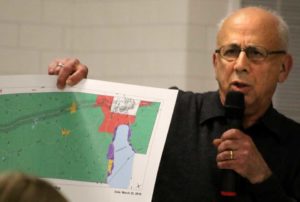 After two hours of often personal exchanges, Richfield Town Board member Kane Seamon, right, makes a motion a half-hour ago to approve the proposed – and much-debated –  zoning law that grew out of comprehensive plan approved last year.  Board member Rex Seamon, left in top photo, seconded the motion, and the plan was enacted, 3-2, with Board member Larry Frigault, second from left, joining the majority.  Town Board member Fred Eckler, next to Frigault, and Town Supervisor Paul Palumbo, voted nay.  Earlier in the evening, Town Attorney Michelle Kennedy, who at Frigault’s request reviewed a petition from Nick Palevsky, inset, the Republican supervisor candidate, disqualified enough signatures so a 4-1 super-majority vote was not required.  However, if the Nov. 5 town elections put Palevsky and Ed Bello Jr. on the town board, and remove Kane Seamon, who lost the Republican primary in June to Ed Bello Jr. and is running as an independent, the 3-2 majority will shift.  Palevsky said the new board will then revisit the comp plan and zoning law, which has been criticized as a creation of Protect Richfield, a citizens group that formed five years ago to fight plans for the Monticello Hills Wind Farm.  (Jim Kevlin/www.AllOTSEGO.com)

Fate Uncertain In Richfield Over Divisive Comp Plan 3 Wind-Farm Opponents Seeking To Push Vote Through, But Election Could Erase It

Vote Through, But Election Could Erase It

RICHFIELD SPRINGS – The fat’s on the fire in the Town of Richfield, and may be until a new town board is installed after Jan. 1.

About 70 people descended on the RSCS cafeteria this evening for two hours of polite but divided opinion on a new comprehensive plan and associated zoning code.  Some say the plan and code were developed by West End neighbors to block the five-turbine Monticello Hills Wind Farms, and that the resulting documents are too restrictive.

About 20 people spoke. Then the action began.

Hearing over, a town board meeting was called to order, and it surfaced that three West End allies – Council members Larry Frigault, Rex Seamon and Kane Seamon – have scheduled a meeting for 7 p.m. next Monday, Sept. 30, to push through a vote on the new law and code before the Nov. 5 election, when they may lose their majority.

END_OF_DOCUMENT_TOKEN_TO_BE_REPLACED

COOPERSTOWN – The absentee ballot count affirms the Town of Richfield votes of June 25, the day of the Republican primary there.

The final count has Nick Palevsky with 179, defeating David Simonds, 168, to succeed Town Supervisor Paul Palumbo when he retires at the end of the year.

It also confirms Fred Eckler with 225 and Edward Bello with 208, knocking incumbent Kane Seamon, with 168, off the Republican ballot.

Nick Palevsky In; Kane Seamon Out

RICHFIELD SPRINGS – The tide is going out on anti-wind power here.

END_OF_DOCUMENT_TOKEN_TO_BE_REPLACED

It is heartbreaking that our town has been plagued for over a year by Nick Palevsky’s horrendous and derogatory articles in the Pennysaver and other papers about a draft zoning law, the zoning volunteers and board members.

Whenever there is chaos, negativity, and turmoil in Richfield, it is Palevsky at the helm. And his statements are RARELY based on fact. So then the bullying and placing of doubt and fear into residents’ minds begins. The current scene is all too familiar.

Palevsky doesn’t understand that you cannot get a different outcome if you continue to do the same old thing. Some change is necessary, and some of the current board members understand that there are steps you need to take to reach your town’s goals.

Bullies and backdoor politics, which Palevsky has used in Richfield for 20 plus years, will set us back even further. In all his articles, what has he offered? Nothing but misinformation and rumors. Is this the person that you want to put in as supervisor, yet again?

Read between the lines, fellow residents. Palevsky has damaged reputations and the integrity of our town, over and over again. But it is not too late. Republicans can vote in the very important Republican Primary on June 25.

A vote for David Simonds for supervisor will bring unity. Kane Seamon has become a strong councilman and deserves our vote. NO vote for Fred Eckler who lives in Florida four months of the year, is always negative. In November’s General Election another young businessman will be on the ballot for councilman – Jeremy Fisher. He runs the much improved bowling alley, and is excited about Richfield. He gets my second vote!

Super-Majority Aims To Keep Tyranny Out Of Zoning Plans

Tyranny Out Of Zoning Plans

For 150 years after Independence, government attempts to limit how landowners use their property were seen as unconstitutional because:

Then came the ‘progressive’ era, in the early 1900s, which brought us the income tax, direct election of Senators, the Federal Reserve and Prohibition – all the so-called progressive reforms.

In 1916, New York City passed one of the first zoning laws in the nation – in response to construction of the Equitable Building (which still stands at 120 Broadway). The building towered over neighboring residences, blocking windows and hiding the sun.

All the original zoning laws in this country were written to address the problems brought on by congestion.

The first zoning enabling act was entitled:“An act to provide for the establishment IN CITIES AND INCORPORATED VILLAGES of districts within which the use of land and structures may be regulated by ordinance….” (emphasis added)

The proposed 100-page zoning amendment is NOT appropriate, and not warranted. It addresses problems we don’t have and arbitrarily interferes with growth and economic development.

The original NYC zoning law provided for protest petitions to enable dissenting landowners to force a super-majority vote by the legislature.

Edward Bassett, the legal architect of the ordinance noted that the protest petition was “a device for the protection of the property owner” and that its purpose was “to prevent easy or careless changes in the zoning regulations.”

In other words, the authority of government to zone and the recourse for landowners to petition were born in the same moment. The one has gone along with the other since there ever were zoning laws.

Property owners here in Richfield, who have signed objections to the zoning amendment, are using protest petitions exactly as they were intended – “to prevent easy, careless changes“ to our property rights.

Our protest petitions will require a super-majority of the Town Board to pass the zoning amendment. Without a fourth vote, the amendment will fail. The three-member majority may still use our tax dollars to pay an attorney to challenge the petitions – on technicalities.

Nick Palevsky and David Simonds are running for the Republican nomination for Richfield town supervisor in the June 25 primary.