The Smithy to present first exhibition of the gallery season

The Smithy to present first exhibition of the gallery season

The Smithy art gallery at 55 Pioneer Street in Cooperstown is opening for its first showing, running through July 27.

The exhibition, entitled ‘Air’, will feature artwork by both members and guests of the Smithy.

The theme of ‘Air’, as the title suggests, is all about capturing the “invisible force in our daily lives” the Smithy wrote in an email. “Apart from its literal importance, our artists have been able to take inspiration from the many things we have come to associate with AIR.”

Go to smitharts.org for more information.

The village of Cooperstown will remove a controversial solar-powered speed limit sign from Pioneer Street.

The village’s Board of Trustees voted unanimously Monday, April 26, to remove the sign, which was in front of 100 Pioneer Street and told motorists heading south on Pioneer if they were exceeding the village’s 30-mile-per-hour speed limit.

The meeting was held in person in the village ballroom at 22 Main St.

As part of the motion, the trustees agreed to relocate the sign to the southern entryway to the village on State Route 28.

The sign has drawn complaints from dozens of current and former village residents, complaining about the aesthetics of the sign and dismissing the need to put it in a residential area. Two residents spoke against the sign Monday, leading Cooperstown Mayor Ellen Tillapaugh to tell the crowd of about 15 people that the trustees would fix the sign problem later in the meeting.

“The intent of the meeting tonight will be to remove the solar-powered sign … and nothing will be on Pioneer.

END_OF_DOCUMENT_TOKEN_TO_BE_REPLACED

Having lived on Upper Pioneer Street for some 36 years, it was indeed distressing to read John Webb’s “Letter to the Editor” in last week’s paper. The very idea of placing a solar-powered speed sign in one of Cooperstown’s residential neighborhoods is beyond the pale.

It is made even more reprehensible given the fact that not only was the sign a gift to the village by one of the street’s residents, but more importantly, the village erected the sign without giving the other residents of the street the opportunity to give any input into having such a sign in their neighborhood. It is indeed sad to think that the village government is doing the bidding of one individual without any seeming concern for the rest of its constituents. Of course, it would seem of late that the village has a bit of a history of accepting a number of things without considering what the final affect might be on village residents.

END_OF_DOCUMENT_TOKEN_TO_BE_REPLACED

Pioneer Returns To Parallel But Not All Residents Are Pleased

Pioneer Returns To Parallel But

Not All Residents Are Pleased

COOPERSTOWN – Village residents will have to wait at least another month to see the Pioneer Street parking issue come to a close.

At their meeting tonight, village trustees set a public hearing for their September meeting on the proposed parking layout for the northernmost section of Pioneer Street. The layout, proposed by the street committee, returns the street to parallel parking, and would create two handicap accessible parking spaces on the northern end of the street closest to the lake.

The proposed layout would also turn what was originally all-day parking into three-hour spaces to accommodate park goers, as opposed to employees in the village looking for all-day parking. END_OF_DOCUMENT_TOKEN_TO_BE_REPLACED

COOPERSTOWN – Parking on lower Pioneer Street may soon be back to where it was.

The Village Board’s Street Committee this evening planned to recommend “return to parallel parking” after two months of heated debate over installing diagonal parking there.

UPDATE WILL BE POSTED AFTER THIS EVENING’S MEETING 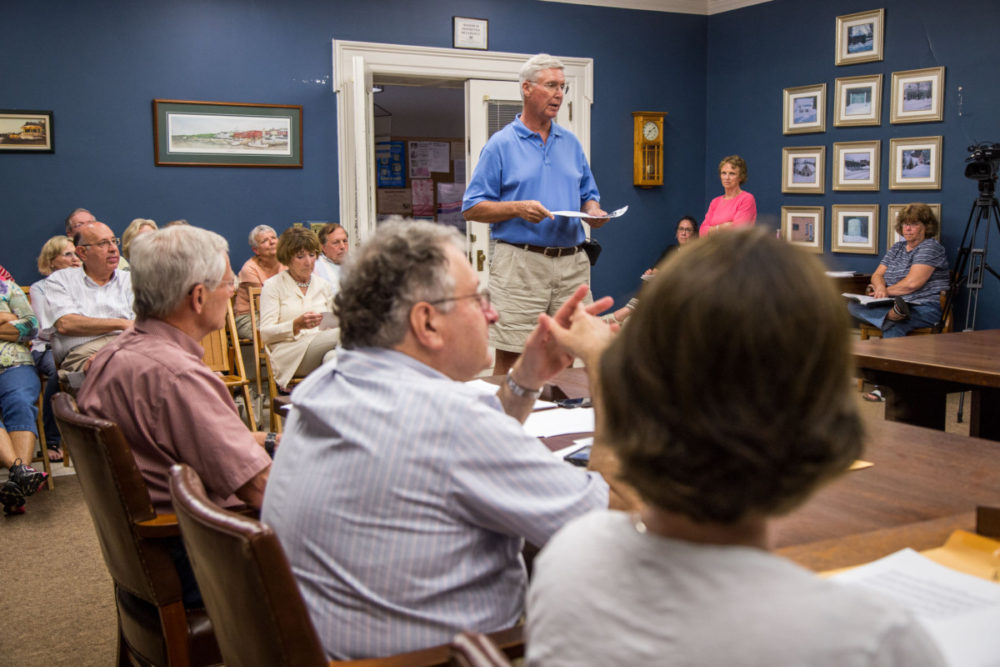 Pioneer Street neighbor Rick Hulse urges the Cooperstown Village Board to restore parallel parking on the northern section of Pioneer Street at this evening’s trustees’ meeting. The trustees decided in June to re-evaluate parking on the section of Pioneer Street closest to the lake, and conducted trial periods for two different parking schemes involving angled parking on the east side of the street at Lakefront Park. Residents living on the street immediately voiced displeasure, and reaffirmed their sentiments at the public hearing at tonight’s meeting. Ultimately, on a motion by Trustee Lou Allstadt, the board moved to approve Local Law #4, essentially returning the parking back to the original layout, but the motion did not pass with a 3-3 tied vote. Proposed Local Law #6, creating six new parking spaces with a mix of angled and parallel parking, saw the same fate with a 3-3 vote. The other issue facing the board this evening, a special use permit to turn The White House Inn, 46 Chestnut St., into a hotel, passed unanimously. (Parker Fish/AllOTSEGO.com)

Trustees May Act On

COOPERSTOWN – The Village Board will hold two public hearings at 7 tonight at 22 Main, and perhaps act on one or both of the plans under consideration, according to Trustee Cindy Falk:

Option 3, which resulted from neighbors’ objections at last month’s meeting, would shift diagonal parking to the north. Under the previous plan, headlights would be shining into the livingroom of the Leist family at 5 Pioneer St.; Option 3  eliminates that.  It also creates three parallel-parking spaces across from the Leists, raising the number of parking places from 23 in Option 2 to 26 in Option 3  Or the trustees could go back to Option 1, the traditional all-parallel-parking scheme.

END_OF_DOCUMENT_TOKEN_TO_BE_REPLACED

COOPERSTOWN – After five years of saving paid parking revenue, the Village of Cooperstown is ready to start the $1.2 million Pioneer Street Reconstruction Project and pay for it with money set aside.

“Some of these pipes date back to the 1890s,” Trustee Cindy Falk, who chairs the Village Board’s Streets Committee, told a public meeting tonight at the fire hall. “In 2014, during the Winter Carnival, we had a water main break while it was snowing. There were crews plowing and crews trying to fix it. They’re over 100 years old. We’re living on borrowed time.”