END_OF_DOCUMENT_TOKEN_TO_BE_REPLACED

An ice fisherman shares his story

Rob Moore is a typical outdoorsy kind of guy.  He hunts, he fishes, he hikes.  “I love to fish,” he said. “Whether it’s from a boat or on the ice, I just love it.”

“When I was just a boy living in Cooperstown, I fished behind Basset 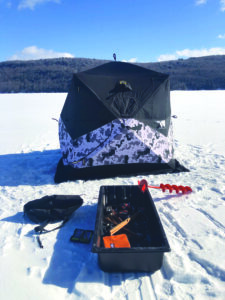 t Hospital,” he said, before divulging a sportsman’s secret. “That’s a perfect spot for fly fishing and salmon fishing during the summer. As a matter of fact, I learned how to swim in that lake.”

Mr. Moore’s father taught him how to ice fish on Lake Otsego when he was young.  “My father and I were out on the ice and the first thing I did was catch a sunfish,” he said. “That got me hooked.”

Mr. Moore left Cooperstown when he was ten years old in 1971, moving west to the San Fernando Valley.  He taught scuba diving and did a lot of spear fishing for 15 years, then moved on to construction before he moved back to this area in 2010.  He is a now a local construction contractor.

“I’ve always loved fishing, any kind of fishing,” he said. “Typically, any fishing is better either in the mornings or evenings, both ice fishing and boat fishing. You have to be all about safety on the ice.”

Being ‘all about safety’ means a careful routine for Rob Moore and anyone wandering out onto a frozen lake.

“First, we take a ‘Spud Bar’ to the ice,” he said. “It’s a steel rod with a chisel on the end of it. You slam that on the ice three or four times to see if it breaks through the ice.”

“The rule of thumb is for a person, the ice should be a minimum of three-and-a-half inches thick. If END_OF_DOCUMENT_TOKEN_TO_BE_REPLACED

DEBATE – 7-9 p.m. Three candidates for two seats on the Cooperstown Village Board – Democrats MacGuire Benton and Joe Membrino, and Republican Mary Margaret Robbins Sohns – will debate in the Village Board room, lower level, at Village Hall, 22 Main.  Sponsored by the League of Women Voters.  Election is Wednesday, March 18. END_OF_DOCUMENT_TOKEN_TO_BE_REPLACED

How To Travel In Safety

END_OF_DOCUMENT_TOKEN_TO_BE_REPLACED

If DOT engineer Peter Larson thought it was going to be a ho-hum hearing that Dec. 15, 2008, at Oneonta High School, Kay Stuligross quickly advised him otherwise.
“My husband was killed right there,” the former county representative told Larson, pointing to a spot where Lettis Highway enters Southside, in front of McDonald’s.
Stuligross’ husband, Jack, a retired Hartwick College economics professor, had been riding his bike when it was struck by a car there on Oct. 2, 2007, just 14 months before.  He died of his injuries.
Just being there, Kay Stuligross underscored: road improvements are matters of life and death.  That’s often lost in the excruciating process of state and federal permitting.
Despite her testimony, the Southside roadwork – Project 9120.43 – was never done, as federal money dried up following the Great Recession that had begun just a couple of months before the OHS hearing.

That speaks to the complacency that sets in on road projects, as well as the competition among needy municipalities.
•
Nonetheless, the past few days has brought good news on two projects, long on the books and long debated.
One, in Oneonta, the city and town jointly applied Thursday, Aug. 16, for $8.7 million in state funds to beautify Lettis Highway, add a sidewalk there, and build a sidewalk on Southside Oneonta from Lowe’s to the east to Home Depot to the west.
Two, in Cooperstown, for a redesigned traffic-light setup at Chestnut and Main, the village’s only traffic signal. The Village Board, that same Aug. 16, let a $1.9 million contract to Upstate Companies LLC, an Mount Upton firm, to do the work, beginning the Monday that Labor Day Weekend ends.

•
In Oneonta – if the grant comes through; perhaps by January, Mayor Gary Herzig hopes – the sidewalks could finally address the major concern underscored by Jack Stuligross’ death.
As important, perhaps moreso, would be construction of a sidewalk on one side of the whole length of Lettis Highway, the four-lane that connects Main Street with the Southside strip.
Many Oneontans who work in the big box stores must now walk precariously along Lettis’ shoulder to their jobs, a long-ongoing danger that now may come to an end, Herzig hopes.Right now, Lettis Highway – at I-88’s Exit 15, the main entryway to the city – makes a poor first impression to the generally charming City of the Hills. Some of the city’s money would be used for less stark lighting (that would illuminate the roadway AND the sidewalk). And it would create a landscaped green median strip, a welcoming replacement for the Jersey barriers and asphalt.
•

Some of the Cooperstown grant – a TEP, for the USDOT’s Transportation Enhancement Program – will be used for further beautification of Main Street – more new benches and the like.
Foremost, though, it will “bump out” the sidewalk in front of Mel’s 22, narrowing Chestnut Street there, Mayor Ellen Tillapaugh said. “Walk/Don’t Walk” signs will clearly guide pedestrians at all four crossings.
For years, anyone trying to cross that intersection on foot – but particularly tourists, some 500,000 a year – don’t know what to do. Drivers passing through can see the apprehension on their faces.
•
Both of these projects are long-awaited: Oneonta’s, a decade and more; Cooperstown, five years, since the original TEP application was submitted.
As the work begins – in Oneonta by next summer, it can only be hoped – let’s keep Jack Stuligross in mind.
What happened to him didn’t have to happen. Let’s do what we can to ensure it doesn’t again to someone else.

EDITORIAL: While Security Challenges Grow, So Does High-Tech

Grow, So Does High-Tech

Ten years ago, we might have said, if high-tech can’t solve security problems, its future is limited. Today, high-tech is the King Kong that dominates everyone, and is likely to do so for the foreseeable future.
That doesn’t mean security problems have gone away. If anything, they are more daunting and they are inescapable.

END_OF_DOCUMENT_TOKEN_TO_BE_REPLACED

OPERATION CHRISTMAS CHILD – 4-6 p.m. Pack a shoebox with items that will bring joy to children as they are delivered around the world. Collection point at Main St. Baptist Church, corner of Main and Maple Sts., Oneonta. Info, @ www.msbchurch.org/occ or email msbc@msbchurch.org or call (607)432-5712