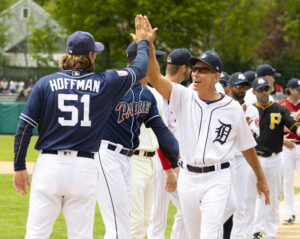 Hall of Fame pitcher Fergie Jenkins told his Twitter following that he “can’t wait!” for Memorial Day Weekend when the Hall of Fame Classic returns to Cooperstown’s Doubleday Field after a two-year pandemic absence.

Tickets for the Saturday, May 28 game are on sale now for fans who want to see Mr. Jenkins, along with Hall of Famers Wade Boggs, Jack Morris, Tim Raines, and Ted Simmons play a seven-inning END_OF_DOCUMENT_TOKEN_TO_BE_REPLACED

Largely overlooked by the voting members of the Baseball Writers Association of America in his first year of eligibility in 1994 Simmons received just 3.7% of the requisite 5% in order to remain on the ballot.

Simmons spent a generation in candidacy purgatory until his name was included on the Modern Era Committee ballot for the first time in 2018, falling one vote shy of the 12 needed to gain the 75% necessary for election. The third time proved to be a charm for Simmons who received 13 votes on the 2019 ballot, joined by long time MLBPA (union) Executive Director Marvin Miller. END_OF_DOCUMENT_TOKEN_TO_BE_REPLACED

The ceremony was rescheduled from its traditional last Sunday in July to an event at 1:30 p.m., Wednesday, Sept. 8, on the grounds of the Clark Sports Center in the town of Middlefield.

The event will celebrate the inductions of Class of 2020 members Derek Jeter, Marvin Miller, Ted Simmons and Larry Walker and will be broadcast live exclusively on MLB Network.

Since 1992, the event has been held on the grounds of the Clark Sports Center, with estimated crowds approaching and surpassing 50,000 at five of the last six ceremonies, from 2014 to 2019. The second-largest crowd on record – an estimated 55,000 people – attended the Hall of Fame’s last induction, July 21, 2019.

END_OF_DOCUMENT_TOKEN_TO_BE_REPLACED

Voices Of The Game To Honor

BASEBALL – Noon. Virtual Voices of the Game to honor Hall of Fame 2020 inductee Ted Simmons who played alongside hall of famers Paul Molitor and Robin Yount for the Milwaukee Brewers. Join them as they reminisce about the Brewers team and their journey to the Hall of Fame. Visit baseballhall.org/events/virtual-legends-of-the-game-Ted-Simmons?date=0 for details.

END_OF_DOCUMENT_TOKEN_TO_BE_REPLACED

COOPERSTOWN – Marvin Miller, who as leader of the MLB Players Association established free agency, turning players into tycoons, will enter the Hall of Fame in the Class of 2020.  He will be inducted posthumously Sunday, July 26.

He was elected yesterday by the Modern Era Committee, along with Ted Simmons, 70, an eight-time All-Star catcher who played 13 seasons with St. Louis.

The Baseball Writers of America’s picks, expected to include Yankee Derek Jeter, will be announced in  mid-January.