An Oneonta resident whose art thrusts viewers into a world of abstract thoughts and concepts is on display at The Community Arts Network of Oneonta.

Her show is called ‘Along the Way,’ which shows old and new work that reflects her life journey as an artist.

“Along the Way is a connection between the older and newer drawings,” Silber said during a tour of the gallery Thursday, May 14. “I’m primarily a painter but I’ve been drawing for the past year and I love it.” 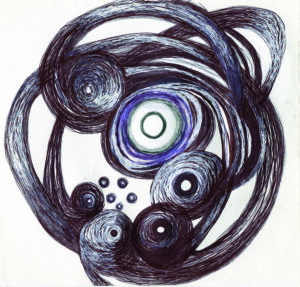 Some of Silber’s drawings bring to mind otherworldly dimensions. The drawings were created with charcoal, ballpoint pen, colored pencils and gel-rolled pens.

The newer pieces are smaller compared to the older ones but Silber said she believes this is a necessary component to the works. She said they are abstract pieces which are meant to be evocative of figures and bodies.

“I love how intimate they are,” Silber said.

“To me they’re about connections, relationships and how things fit together … they’re abstract but pretty representative of figures formed between space … I really like creating forms that are three-dimensional even though they’re in two-dimensional space,” Silber said. 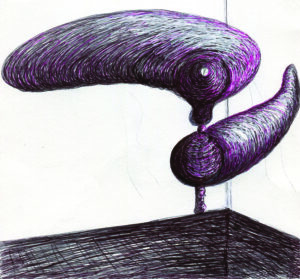 Silber has an MFA in painting from Maryland Institute College of Art and has been entrenched in the art world with residencies at Yaddo, the Fine Arts Work Center in Provincetown, and the Millay Colony. She has had shows in New York City, San Francisco, Minneapolis and even as far as Germany and Monaco.

As a graphic designer, she designed the logo of the Green Toad Bookstore on Main Street in Oneonta.

“A lot of my time is teaching and doing my graphic design … it’s hard to make a living as an artist,” Silber said.

“Everything I do is connected to art.”

This is the first show with a public reception that CANO is having in a year. She says that she wanted to do it because she wanted to see people.

Silber is also going to be part of a group show at the Smithy in Cooperstown in June. 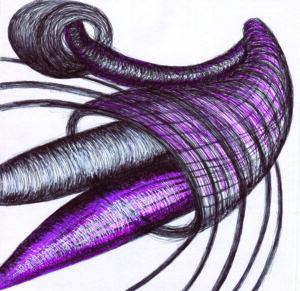