“There was some harassment of female pilots at that convention in Las Vegas,” said Dave Rees, Milford resident, business owner and former Navy pilot. “The whole thing got turned upside down. A lot of people didn’t get promoted because of that convention. I was not in attendance at the time.”

Since then, things have changed for the better at the Tailhook Symposium, and Rees recently returned from Reno, NV, where he attended the convention that celebrated the 100th anniversary of aircraft carrier aviation and reunited former Marine and Navy fliers.

END_OF_DOCUMENT_TOKEN_TO_BE_REPLACED

Iron String Press, the parent company of “The Freeman’s Journal,” “Hometown Oneonta” and “AllOtsego.com,” has hired Darla M. Youngs as general manager. Youngs joins Publisher Tara Barnwell and her team as the organization seeks to revitalize its newspapers, revamp its website and reestablish its connection with the communities it serves.

“We are so fortunate to have Darla join us,” Tara Barnwell, Publisher, said. “She brings a wealth of knowledge from her previous newspaper experience, everything from design and production to sharp editing skills.”

Youngs, who hails from Bouckville originally, has a long history covering the news and addressing issues important to Otsego County.

END_OF_DOCUMENT_TOKEN_TO_BE_REPLACED

Lanza had been serving part time since graduating the Police Academy in June and now will be working full time to protect and serve the Cooperstown community.

Officer Lanza put himself through the police academy after being inspired to join the police force by his father who had worked in law enforcement for 30 years. He and wife Kate, who owns and operates Kate’s Upstate, are now residents of Fly Creek.

In the wake of Hurricane Ian, with massive recovery efforts now underway, a new novel by Hartwick resident Jeff O’Handley is particularly relevant.

“Powerless,” Mr. O’Handley’s debut work, was published by Breaking Night Press in August. The inspiration for the story came, ironically enough, while driving through a hurricane.

“I had to pick my daughter up at her friend’s house. At one point, an image popped into my head of the road flooded out. I asked myself, ‘What if I couldn’t get to the house to pick her up?’ It was a terrible thought,” Mr. O’Handley said. “It also seemed like it would make a great story. Once I started writing, it took a lot of twists and turns and changed quite a bit, but that’s where it started.”

END_OF_DOCUMENT_TOKEN_TO_BE_REPLACED

Approximately 150 people gathered at the Foothills Performing Arts & Civic Center for the eighth annual TedXOneonta on September 24, to hear five speakers share their “ideas worth spreading.”

The theme of this year’s event was “Tranformations.”

Micah Wonjoon Kessel described the transformative power of empathy in the Diversity, Equity, and Inclusion trainings he and his company design. According to Google research, “psychological safety” and feeling included are the key to what makes teams great.

END_OF_DOCUMENT_TOKEN_TO_BE_REPLACED

Oneonta’s Barbara Doyle is now a full-time writer. “As of January 1, I committed to writing full time,” she said. “It’s great; I can travel and write anywhere I want.”

Ms. Doyle has published 15 books under the name B. Celeste. “It feels great, this is the one thing since I was a kid that I said I wanted to do,” Ms. Doyle said. “I’ve always loved writing and reading. I’m not cut out to be a teacher or a nurse. I feel I am meant to do something more.”

Ms. Doyle’s style of writing is the romance genre. “I write contemporary romance in fiction. That’s my niche,” she said. “I’ve always gravitated toward that. But this is more real-life romance. I keep it real.”

END_OF_DOCUMENT_TOKEN_TO_BE_REPLACED

Charlie Waller, grandson of Bill and Carol Waller of Cooperstown and son of CCS graduate Scott Waller has won the IFA Futsal World Championship in Blanes, Spain. He played as a member of the U.S. team made up of members from across the country. His Under 14 team won every match, including the championship game against Scotland.

END_OF_DOCUMENT_TOKEN_TO_BE_REPLACED

Family Nurse Practitioners (FNPs) are nurses with an advanced degree who treat a full range of patient populations, from infants to the elderly.

END_OF_DOCUMENT_TOKEN_TO_BE_REPLACED

A Lot to Learn Here at Hartwick

A Lot to Learn Here at Hartwick

“I’m very excited to be here and in this new capacity. We are still moving in and getting a used to everything here. I understand we will need to make some changes but we are ready!” said Darren Reisberg, newly appointed 11th president of Hartwick College.

“We were in Chicago for 22 years, so it’s great to be back on the east coast. My family is from New Jersey so they are happy and appreciate we are back too!”

END_OF_DOCUMENT_TOKEN_TO_BE_REPLACED

A project that was started almost three years ago, the Cherry Valley Playground was completed this past weekend.
It is finally ready to accept kids of all ages to come play!

It all began when two young ladies who are part of the Cherry Valley Girls Scout Troop wanted to get their Bronze Award. “You have to complete a journey in order to get a bronze award,” Zola Palmer, 11, said. “We had to think about what would make our community better. We had to figure out an active community service.”

“We really wanted to do something that would draw people to our community, since we’re so small,” Bailey Thayer, 12, said. “We thought if we made a playground, more people would come and visit Cherry Valley.”

END_OF_DOCUMENT_TOKEN_TO_BE_REPLACED

A small miracle took place this morning on Main Street Cooperstown. Lily, a recent rescue dog from Ohio, got to see the world for the first time after spending most of her 5 years in a puppy mill.

Lily took this walk with Stacie Haynes, the Executive Director for the Susquehanna SPCA, to seek out people to adopt her and the 5 other dogs rescued from the mill who are now being housed at the shelter.

With the shelter full to bursting already, they are seeking people to adopt these now-fortunate pooches.

Tonight, Friday July 15, the shelter is holding a ‘Singles Night’ for dogs who would do best in homes as the only pet. Stop by the shelter between 5 and 7 p.m. to meet the adoptable dogs. Singles will be marked with a rose on their kennel. Visitors will receive a coupon for a free beverage redeemable at Brewery Ommegang’s Fire Pit Friday. Visit https://www.facebook.com/SQSPCA/

The Cooperstown Rotary Foundation is pleased to announce that CCS graduate, Madison Hayes, is the recipient of the 2022 Catherine Black Scholarship. Madison was acknowledged at this year’s CCS Commencement Ceremony on June 26th and received the $1200 scholarship at the July 5th Rotary luncheon at The Otesaga. Madison along with her parents Tim and Lindsay Hayes were guests of the Foundation at the Rotary meeting and were joined by Madison’s grandfather, Rotarian Bill Hayes.

The scholarship was created in 2015 by the Foundation in memory of Catherine Black who was a founder and Charter Member of the local Rotary Club’s tax-deductible charity. Catherine was the first female president of the Cooperstown Club and went on to be one of the first female District Governors.

END_OF_DOCUMENT_TOKEN_TO_BE_REPLACED 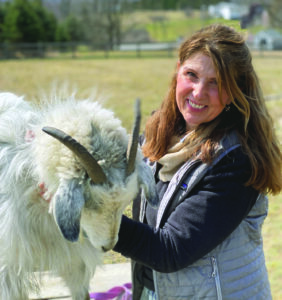 The chickens, Christine McBrearty-Hulse said, were “the gateway drug to farming” when she thought it would be fun to raise a few. Hulse Hill Farm, on Route 28 midway between Cooperstown and Fly Creek, still has chickens, but also pigs, barn cats, a rabbit, and goats of various age gathered in spacious fenced-in fields, with the farm’s North American Cashmere goat herd at the core of her farm products.

“It’s a true homestead farm experience,” she told The Freeman’s Journal / Hometown Oneonta on a tour of the farm, which includes a bed-and-breakfast (including a well-appointed ‘tiny home’), vegetable gardens, and farm stand with products from the farm and local artisans. “We looked at our options and took old ideas from farming and 4-H and it turned into all this.”

Along with the b-and-b, Hulse Hill offers at-the-farm events, gearing up for an April 16 Make-a-Posey Fiber Pin workshop, farm tours on April weekends, and two projects about which Christine is excited – a ‘native paw paw END_OF_DOCUMENT_TOKEN_TO_BE_REPLACED