The state's new numbers top the previous high by nearly 4,000 as officials struggle to contain the spread

Some Miami-Dade County hospitals are near capacity

Hospitals in Covid-19 hotspots are running out of remdesivir

DeVos asked if she has a plan to reopen schools safely. See her response

Superintendent's message for DeVos: 'You can't put every kid back in a school'

Doctor reacts to Trump's claim: It's a preposterous thought

Trump defends trips to golf courses, says it's his 'exercise' and he plays 'very fast'

2 die at resort in Spain after British tourist falls from hotel balcony, lands on man

Shooting outside Michigan apartment party sends at least 5 to the hospital: reports 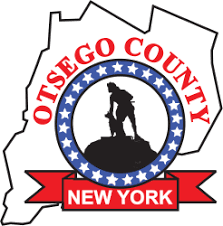 COOPERSTOWN – “He’s here.  I know he’s here,” county board Chair David Bliss said around the noon hour, looking into Clerk of the Board Carol McGovern’s office through a door at the front left of the board meeting room.

Suddenly, there he was:  Congressman Antonio Delgado, D-19, all 6-foot-4 of him, who said he’d just driven up from his Rhinebeck home, two and a half hours away.  Some of the attendees seemed aware he was showing up; others seemed genuinely surprised.

Bliss, who represents part of Cooperstown and the Town of Middlefield, said arrangements weren’t firmed up until last night.

Andrew Marietta, D-Cooperstown/Town of Otsego, remarked that no congressman has visited the county board since he took office in 2016, when Chris Gibson represented the 19th, followed by John Faso.  (Some remembered Mike Arcuri, D-Utica, coming when Otsego was in the 24th District more than a decade ago.)

He noted when some kids have to study in McDonald’s parking lots to have access to Wi-Fi, and people lack access to Telemedicine, lack of broadband in places like Otsego County is a problem.

On energy, he recalled the county’s recent challenges, the fight against fracking and having to cope with “interruptible power” at institutions like SUNY Oneonta.  He said Upstate’s quality of life make it an ideal place for a “Green Jobs economy” to flourish, since people want to live here.

On opioids, he said an attitude change is a necessary part of the solution.  “We have to do better to stop stigmatizing what we know is a disease,” he said.

On housing, he emphasized the need for “workforce housing,” so when people want to work here and can actually find a job, they have a place to live.

He harkened back to meeting with Oneonta Mayor Gary Herzing and the Opportunities for Otsego board a few weeks ago, and noted he’s returning Saturday for a poverty summit at 2 p.m. at Foothills.  (That evening, 6-7, he will be holding a Town Hall meeting at the Cherry Valley Community Center, 2 Genesee St.)

He took questions, but was a bit short on specifics in his answers.

For instance, county Rep. Meg Kennedy, C-Mount Vision, who chairs the county’s Energy Task Force, noted the future is electricity (solar and wind), but Upstate lacks a sufficient grid to deliver that power.   If left to “market forces,” it will never be built.

And Marietta asked about the county facing rising costs to get rid of renewables.

Their question:  Does the federal government have any programs the county can tap into, or any plans to step in and help.

In both cases, Delgado responded by talking about “opportunities,” and the need for bipartisanship to solve the issues.  “I have a lot of Republican colleagues from rural districts who are going through the same things,” he said.

Later, Marietta said he understood Delgado was putting the local challenges with recyclables in the context of the ongoing trade war, as China used to accept large amounts from the U.S., but has cut back.

The congressman ended his visit by shaking hands with each of the reps individually.

2 thoughts on “Delgado Visits County Board, Surprising Some”