Federal, state, and local representatives all agreed broadband access remains a significant impediment to Otsego County’s economic growth as they spoke to the Otsego County Chamber of Commerce’s virtual “2022 State of the State” presentation on January 11.

“Washington talked about infrastructure for decades,” Rep. Delgado said in his keynote address. “Finally in 2021 we were able to come together and get something done. Based on formula funding alone, New York should get $1 billion in highway repair funds, $2 billion for bridges, and $100 million for broadband access across the state.” END_OF_DOCUMENT_TOKEN_TO_BE_REPLACED

ONEONTA — Joshua Beams, the new Otsego County administrator, met with Rep. Jill Basile, D-Oneonta, on Friday, Oct. 8,  to reassure her constituents “there will be no fiscal impact for Oneonta” with regards to the new EMS plans for the county.

Beams stressed Oneonta, which has its own community-funded EMS, will not be double charged for the county’s supplemental ambulance service, which is direly needed in rural areas of Otsego.

According to Beams, the EMS service would be an “opt-in only program.” The county will still service Oneonta through mutual aid, but city and/or town residents won’t be taxed for the service if they chose to opt out.

“There will be no fiscal impact for Oneonta,” Beams assured Basile.

END_OF_DOCUMENT_TOKEN_TO_BE_REPLACED

Joshua Beams, a 2005 SUNY Oneonta graduate, was appointed as Otsego County administrator, effective Oct. 4, at a special meeting of the county’s Board of Representatives Tuesday, Sept. 7.

The position was originally approved in December 2019, but the hiring was delayed a year because of a 2020 hiring freeze at the beginning of the coronavirus pandemic.

The position was discussed in county government circles for decades, as Otsego County is governed by a group of 14 legislators and has no executive branch of government. The county’s Inter-governmental Affairs Committee studied governmental forms and executive roles for a year before approving the change in 2019. END_OF_DOCUMENT_TOKEN_TO_BE_REPLACED

ONEONTA – County Rep. Clark Oliver, D-Oneonta, who is also the county Democratic chairman, announced today he plans to run for a second term.  His district includes Wards 1 and 2, encompassing the city’s East End and the colleges.

“I’m very grateful to the people in my district for placing their trust in me, and hope they will do so again,” he said.

Oliver said “the unexpected events regarding the pandemic” dominated his first term, as the county board sought to mitigate financial impacts.  He said his next to will involve “continuing to mitigate the effects of COVID-19, transparently relaying informing to the public.”

END_OF_DOCUMENT_TOKEN_TO_BE_REPLACED

District 5 includes Milford, Hartwick and New Lisbon.  Under the  county board’s weighted voting system, the position has the most people, and thus the most voting clout, of all the 14 districts. END_OF_DOCUMENT_TOKEN_TO_BE_REPLACED

Blunted, Or Sent Back To Committee

COOPERSTOWN – Partisan perspectives led to lively debates this morning at the February meeting of the county Board of Representatives, but the three related resolutions were blunted or failed to reach the floor.

END_OF_DOCUMENT_TOKEN_TO_BE_REPLACED

COOPERSTOWN – Below is the text of the resolution that would declare Otsego County a gun-law sanctuary, where the state’s SAFE Act would not be enforced.

Scheduled for noon, the meeting may be viewed via Zoom on the county’s Facebook page.

According to other committee members, PSLA has been awaiting a legal opinion from County Attorney Ellen Coccoma.

Here is the resolution:

END_OF_DOCUMENT_TOKEN_TO_BE_REPLACED

Deadlock Possible On Filling Vacancy On County Board

But it decided, since the Admin Committee has a 3-2 Republican majority and has already endorsed Oneonta businesswoman Jennifer Mickle for the job, there was no point in pushing for a vote, said Admin Chair Meg Kennedy, C-Hartwick, Milford and New Lisbon.

The Addesso interview was conducted in executive session, closed to public view, as was Mickle’s interview last week.

END_OF_DOCUMENT_TOKEN_TO_BE_REPLACED

Oberacker To Be Interviewed Then

The meeting will not be Dec. 2, as previously reported.

The Democrats have already identified a prospect in District 6 (Maryland, Worcester, Westford and Decatur), according to Democratic County Chairman Clark Oliver.  He said the candidate is a woman, but he hasn’t identified her yet.

END_OF_DOCUMENT_TOKEN_TO_BE_REPLACED

County Board Retreats From Threatened Cuts To Promotion Agency

COOPERSTOWN – After tabling the measure two weeks ago, the county Board of Representatives today rallied behind Destination Marketing of

Otsego County, with nine reps rejecting a resolution to reduce funding for its promotional arm from 15 percent to 24 percent.

Rep. Andrew Stammel, D-Town of Oneonta, proposed the larger cut for DMCOC, saying, “With the present state of the industry” – tourism – “we’re not going to be doing as much in this atmosphere.”  Michele Farwell, D-Morris, second the motion.

END_OF_DOCUMENT_TOKEN_TO_BE_REPLACED

As Board Seeks To Ease Pain

By JIM KEVLIN • Special to www.AllOTSEGO..com

COOPERSTOWN – After a 2½-hour executive session, the Otsego County Board of Representatives emerged this afternoon to vote, 9-4, with one absence, to lay off 58 employees, saving $1 million in the face of plummeting revenues caused by the coronavirus threat.

The meeting, the second this month, was called specifically to decide on layoffs.

END_OF_DOCUMENT_TOKEN_TO_BE_REPLACED

COUNTY BOARD WILL CONSIDER CUTTING 59 JOBS

COOPERSTOWN – The count Board of Representatives will consider eliminating 59 jobs when it convenes tomorrow for a special meeting to address the county’s financial crisis.

The jobs, full and parttime, are the equivalent of 50.5 positions, or about 10 percent of an almost 500-person workforce.

END_OF_DOCUMENT_TOKEN_TO_BE_REPLACED

‘Self-Disclosure’ Only Way Who’s Infected Would Be Released, Chairman Says

Who’s Infected Would Be

COOPERSTOWN – Saying “most people understand HPPA and privacy implications,” county board Chair Dave Bliss told his colleagues today Otsego County residents will only be given gross numbers about the coronavirus infestation.

However, he said, individuals and families may “self-disclose,” he said.

Some larger counties are releasing data by town, but “guidance from the state is that smaller counties with smaller population have the right not to disclose, which is what we’ve decided to do,” since people might be able to determine who the individuals are.

END_OF_DOCUMENT_TOKEN_TO_BE_REPLACED

At This Evening’s 2020 Budget Hearing

COOPERSTOWN – Richard Sternberg, saying he was acting on behalf of the Susquehanna SPCA, told what appeared to be a partly surprised county Board of Representatives this evening that the Shelter will begin unilaterally levying fees Jan. 1 on county entities and towns that require its services.

“We will be initiating a billing system,” said Sternberg, the retired Bassett surgeon and Cooperstown village trustee, who said he was acting as an adviser to the Shelter’s Board of Directors.

Speaking at the public hearing on the 2020 county budget at the county courthouse, he said when Executive Director Stacie Haynes’ time is required, a fee of $80 an hour will be levied, with quarter-hour increments.  For other staff members, it will be a $40 hour fee, plus $30 per day for caring for each animal housed at the shelter, and 65 cent per mile mileage if staffers’ or Shelter vehicles are used.

END_OF_DOCUMENT_TOKEN_TO_BE_REPLACED

Energetic Case Made For County Manager 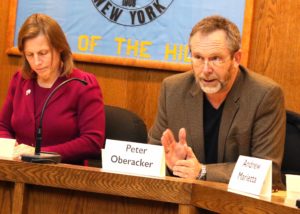