Trump's Proud Boys comments show how his instinct is to fight back harder, an approach that worked in 2016. It is unclear if that is a good fit for 2020.

Analysis: Trump takes his antidemocratic campaign to the people

Why Trump blew up the debate, triggering a media backlash

While the term may bring art and poetry to mind, “liberal arts” encompasses literature, philosophy, mathematics, social sciences and, yes, physical sciences – chemistry, biology,  physics.
Hartwick President Margaret L. Drugovich knows this, and knows that her college’s science programs prepare students to compete at the highest level.
She knows from personal experience: Her daughter, Liz Kelly, Class of 2012, majored in sociology and minored in biology.
That foundation led to a two-year post-graduate fellowship at the National Institutes of Health, part of a team looking for an AIDS vaccine. Then to the University of North Carolina’s epidemiology program. An advanced degree in hand, Liz is now working in a cardiac-research lab.
“She’s a living example: A major doesn’t have to limit your career opportunities,” said the proud mom.

That anecdote underscores: TBRM – the college’s first master’s degree is designed to give graduate students the technical and people skills to bring new pharmaceuticals from lab to your local drug store – makes sense for Hartwick College.
Authorized by the state Education Department, the TRBM major (for Translational Biomedical Research Management) was announced last week, along with the news that Dr. Alice Ceacareanu, a Ph.D. oncology pharmacist and consultant from Buffalo, will head it.
With aging Baby Boomers, Ceacareanu said in an interview, the U.S. is facing multiple “pandemics,” starting with diabetes. And yet it takes 15 years to develop a new drug and another 15 years to get it to market.
TRBM is unique to Hartwick (although others may jump in) and cutting edge in conception and implementation. Its majors will be taught on the Hartwick campus and, via the internet, around the nation and world. On-campus faculty will teach courses locally; experts from around the world will teach too, via the Internet camp in the challenges facing traditional liberal arts colleges.
Plus, through her involvement in the profession nationally – she plays leadership roles in the Council of Independent Colleges and the American Council on Education, and more – she can put what she’s experienced on the ground in a larger context.
So it should be no surprise Drugovich has a clear eye as she looks to the future.
TRBM builds on the strengths of existing Hartwick science programs, she said, yet opens up a whole range of new opportunities for undergrads and others.
“We’re not knocking off a program someone else has done,”
she continued. “We’ve created a program that will uniquely prepare students to enter this role in this
very important industry.”
And the idea wasn’t pulled out of a hat: An alum, Gail Brown, a grad working in California’s pharmaceutical-development sector, told Drugovich a few years ago: “Everyone needs this kind of person in their organization.” 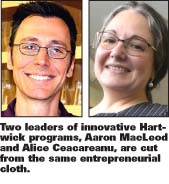 Among other pluses, TRBM jobs will pay well, tilting the cost-benefit equation in the student’s direction.

The new master’s is good news, but Drugovich said masters will not be plunked atop all the existing departments. TRBM is part of a piece of a winning strategy of flexible innovation, of finding a need and, only if it makes sense for Hartwick, filling it.
Remember the college’s three-year degree, allowing undergrads to obtain a bachelor’s at 75 percent of the cost? That was a Hartwick first.
Also, led by now-retiring Provost Mike Tannenbaum, the 75-year nursing program was reenergized a couple of years ago, and a popular criminal justice major added.
The Center for Craft Food & Beverage, founded in 2015, provides micro-breweries, a growing local sector, with lab tests individual operations would be hard-pressed to provide themselves, plus gives undergrads hands-on training in lab work.
Smart stuff.

Also encouraging, the center’s director, Aaron MacLeod, a lively, high-energy professional, and now Alice Ceacareanu, are from the same mold: nimble entrepreneurial thinkers.
“When you’re doing something on the front edge,” said Drugovich, “you need to find the right person. Like we found in Aaron.” She added, “Alice is going to be perfect.”
Reflecting on the latest innovation, it underscores a growing conclusion in the community about Hartwick College: All is going to be just fine on Drugovich’s Oyaron Hill.