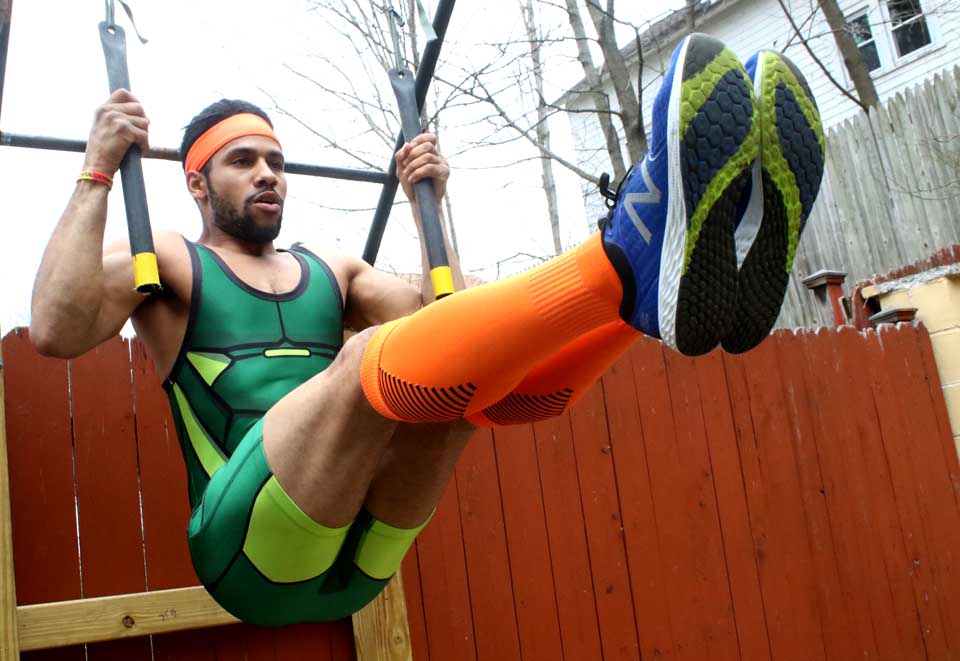 Keep your eyes open as you drive past Oneonta’s 1 Tilton Ave. in the next few days. Anthony Eardley is doing his final training to compete in the TV show, “American Ninja Warriors.” Filming starts Monday. (Ian Austin/AllOTSEGO.com)

ONEONTA – Since infancy, Anthony Eardley hasn’t let the laws of nature get in his way.

Most people avoid being on something high off the ground or being suspended in midair. Eardley runs toward it – and then climbs, grips, swings and flips over it, front-, side- and backwards.

That lack of fear, plus all-around athletic abilities, plus a drive to overcome obstacles – physical and mental – propelled the 28-year-old Oneonta native to win a spot on NBC’s hit TV show, “American Ninja Warrior,” less than two years since entering his first ninja warrior competition on a whim.

“I watched ‘American Ninja Warriors’ for several years.  And over time, in the back of mind, I kept hearing, ‘I could do this, that wall doesn’t look that high’,” Eardley said.  “Everyone else says, ‘That looks dangerous, I’m not going to try that.’”

Eardley searched the Internet to find a Ninja obstacle course nearby.  The closest one was “a hardcore Ninja complex” called “Brooklyn Zoo,” an affiliate of the actual Brooklyn Zoo.  It had adult open gym on Saturdays, so he drove there one weekend in September 2017.

“It was overwhelming at first and I almost hurt myself that first day,” said Eardley, who among other accomplishments played for the Oneonta Stallions football team.

Undaunted, he found out there was a competition that day and signed up for it – his first one.  He came in third out of about 30 contestants, many of whom had “ninjaed” (that’s a real word) for years.

Determined to win a first place in a Ninja warrior competition, he returned to the Internet and found Ninja gyms and competitions all over the country.  And each Ninja gym had a different course.

“You have to invest time in seeing them and practicing on their equipment, so you can do well in competitions,” Eardley said.  “But because I worked during the week in Oneonta, and there were no Ninja gyms within 250 miles, I had to come up with a different way to practice.”

Eardley had the ideal skill to come up with a different way: welding.  He built his own course on a wall of his parents’ Bill and Angela Eardley’s house at 1 Tilton Ave., complete with the all obstacles he needed to learn to overcome.

“I made things to get my hands ready because my hand strength and my grip strength are some of the most important things you need in Ninja.  I’m fast, I can do gymnastics and climb, and have a good core, but I needed to build the strength and skills I lacked,” he said.

In 10th grade, Eardley enrolled in BOCES mainly because it got him out of school for part of the day.  He then chose welding on a whim, discovered he liked it, and earned an associates’ degree in Underwater Welding at SUNY Delhi.  He didn’t know welding would end up helping him become a Ninja warrior.

Since that first competition in September 2017, Eardley has competed in over 25 competitions all over the country – Buffalo, Canada, New Mexico, Florida, Ohio.

He began placing in and winning competitions, raising eyebrows, including those of top Ninja warriors such as Adam Rayl, Joe Moravsky and Michael Torres.

Then, Eardley went head to head with Rayl at the Arnold Schwarzenegger Ninja Warrior course in early March 2019, losing to him by only .4 seconds.  His performance probably was what won him a spot on “American Ninja Warriors.”

Filming – sundown to sunup – starts Monday, April 29. He’ll have to make it into the top 32, then the top 12.  Those finalists will then compete in Las Vegas.

American Ninja Warriors might also “showcase” him, giving him additional TV time if its producers decide Eardley’s story or personality are compelling.

But he doesn’t care too much about that.  “I’m just glad I’m on the show and run the course. It could be five seconds or the whole background,” he said.

And yes, Eardley will have to top the Mega Wall and the  almost completely vertical 18-foot Warped Wall if he wants to make it to the Qualifying Course.

“You have to put your can’ts, don’ts and won’ts aside and just try,” Eardley said.