COOPERSTOWN – The corner parcel at Walnut and Chestnut, which raised concerns after a Dunkin Donuts was proposed there last fall, has been changed from commercial to residential zoning with a unanimous vote by the Cooperstown Village Board.

“This property is a bit of an anomaly,” said Mayor Ellen Tillapaugh. “There are two residential properties on Linden Avenue who didn’t know their back yards were zoned commercial.”

END_OF_DOCUMENT_TOKEN_TO_BE_REPLACED

DETAILS IN THIS WEEK’S JOURNAL

COOPERSTOWN – After a 90-minute public hearing this evening, the Village Board voted, with one nay vote, to approve a zoning code that would create more housing by easing the conversion of single-family homes into apartments.

Unanimously, the Village Board also approved a six-month moratorium on construction in the lot where Dunkin’ Donuts proposed development at Walnut and Chestnut streets; Dunkin’ has withdrawn its application for that site.

END_OF_DOCUMENT_TOKEN_TO_BE_REPLACED

COOPERSTOWN – Dunkin’ Donuts today advised Village Hall it is withdrawing its application to build a co-branded outlet with Baskin Robbins in the village, Mayor Ellen Tillapaugh Kuch confirmed a few minutes ago.

END_OF_DOCUMENT_TOKEN_TO_BE_REPLACED

COOPERSTOWN – Hudi Poldolsky, Jay Bosley and Aviva Schneider want to make sure that everyone in Cooperstown has a chance to make their objections about the proposed Dunkin Donuts known.

“HPARB, the Planning Board and the Trustees are all volunteers, but they have a very narrow scope,” said Bosley. “They can’t do the things citizens can do. They can’t tell Dunkin Donuts that we want Stagecoach coffee and Schneider’s donuts. They need that support from the community.”

On Thursday, Nov. 14 at 7 p.m., they will host a letter writing party at Templeton Hall. “Our goal is 1,621 letters,” said Bosley. “That’s the number of Cooperstown residents who are eligible to vote.”

END_OF_DOCUMENT_TOKEN_TO_BE_REPLACED

COOPERSTOWN – The Village Board is considering a six-month moratorium on the lot at Walnut and Chestnut streets where a Dunkin’ Donuts/Baskin Robbins co-branded outlet is planned.

Village Attorney Martin Tillapaugh said the trustees needed time to think through a “unique” zoning designation in the village.

He pointed out that the lot is the only commercial designation on Walnut Street, where Cooperstown Elementary School is located.

NORTHRUP: Want Franchise Food? Not In Cooperstown; Move To Texas

Want Franchise Food? Not In

We didn’t move to Cooperstown from Texas to avail ourselves of a Dunkin’ Donut.  If we wanted to live in a place with a plethora of fast food restaurants, we could have just stayed in Texas. Lots to choose from, many conveniently located between a gun store (guilty) and a tattoo shop (not guilty).

We moved to Cooperstown because it’s a historic village. Keeping the built environment hysterically historic is hard to overdo. If you don’t understand that, check out Venice, Santa Fe,  Nantucket or the Cotswolds.

People go there because those places are and will remain authentically historic. People live there because they know that they aren’t likely to be infested with fast food franchises any century soon.

100, Some Tearful, In Village’s Ballroom

COOPERSTOWN – Barbara Tongue got choked up as she talked about the threat of the proposed Dunkin’ Donuts/Baskin Robbins on Chestnut and Walnut Street in the Village of Cooperstown.

“My family goes all the way back to the time of James Fenimore Cooper,” she said. “It’s difficult to look at that proposal and imagine that on the corner of our street in this beautiful village.”
More than 100 neighbors packed the Village Hall ballroom Tuesday, Oct. 5, the the Historic Preservation & Architectural Review Board’s public hearing on the proposed coffee and ice cream chain combination.
“It’s an insult to the legacy of this village and the founders to allow something like this into the village,” added Sam Ross.

Even her son Caleb Rosa, a student at Cooperstown Central School, spoke against it. “I haven’t heard anyone at school say it’s a good project,” he said. “This isn’t a fast-food town.”

“Chain stores conduct research on what locations would be good candidates,” said Julie Sorensen. “If we allow a Dunkin’ Donuts: Does that invite other chains? It’s a slippery slope.”

Not one person spoke in favor of the project.

“I’m sitting here listening to the negative comments and wondering what the positive comments would sound like,” said Hudi Podolsky. “To hear that it would improve the visual and historic character – but I couldn’t find it in me to make that argument. It’s an ugly detraction from a lovely community.”

“When I was building a deck and putting up a fence, I had to come before this board with all my materials, how they’d blend with the neighborhood and show that I’d maintain the essence of the village,” said Bret Meckel. “Are you going to hold them to the same standards as you hold the rest of us?”

Following the public comment, Steven Wilson, Bohler Engineering, presented the updated plans to the board.

“It’s always good to hear comments,” he said. “Everyone was passionate but civil.”

Among the changes he made since the last meeting were to remove brick wrapping around the bottom of the building, as well as muting the color palate.

However, problems remained. “It’s a mishmash of styles,” said chairman Liz Callahan. “It’s up to you what style in the neighborhood you’d like to chose to match.”

The brand wall, which Callahan had called “a glaring detraction” when the first plans were proposed on Tuesday, Sept. 19, remained in the drawing, much to the board’s chagrin.

“It’s never going to become something we like,” she said. “It’s definitely not compatible with the aesthetic of the neighborhood, and it thumbs its nose at the character of the village.”

In presenting a design that showed the building in the neighborhood, Wilson only showed the view from Route 28, without accounting for the neighboring homes or incorporating landscaping into the design.

“We need to have a clear understanding of the proposed scale in the context,” Callahan said.

In addition to having to pass HPARB, the plans must also pass the village Planning Board, which has ordered that the project undergo a traffic study.

HPARB declined to accept the application as complete and asked Wilson to return again with a new set of plans.

“And we ask that the brand wall not be part of the package,” warned Callahan. 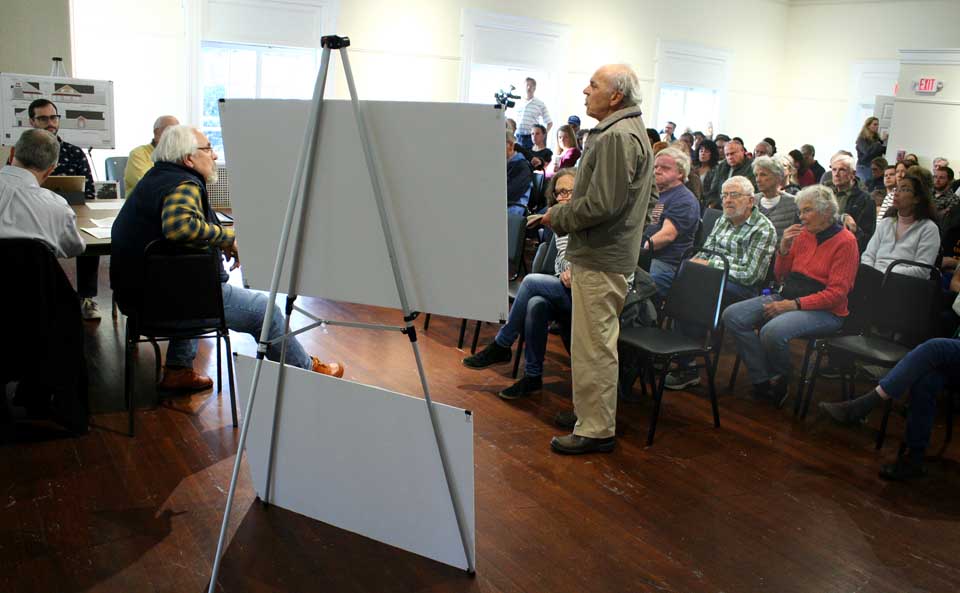 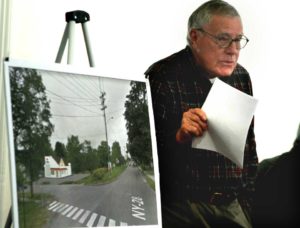 At this hour, more than 100 citizens are gathered  in Village Hall’s third-floor ballroom, where the Cooperstown Historic Preservation & Architectural Review Board is considering an application for a Dunkin’ Donuts/Baskins Robbins co-branded shop at the corner of Main and Walnut streets, just up the street from Cooperstown Elementary School.  One of the first speakers, top, was CCS school board member Anthony Scalici (with wife Sydney seated next to him), who contended the pink and orange building seemed like a classic example of “spot zoning”.   (Behind Scalici, from right, are citizens Marion Carl, John Davis and Dan Naughton.  Visible seated at left are H-PARB members Brian Alexander and Joe Festa.)  But Zoning Enforcement Officer Jane Gentile advised Scalici the plan meets all set-back and  other zoning provisions.  Inset, H-PARB board member Roger MacMillan began the meeting by outlining the responsibilities of the H-PARB board, which is concerned with projects fitting in with the character of a neighborhood, not standard planning and zoning issues.  (Jim Kevlin/AllOTSEGO.com)

NO DECISION IS EXPECTED THIS EVENING;

DETAILS IN THIS WEEK’S FREEMAN’S JOURNAL

Scheduled For Oct. 8 At Village Hall

COOPERSTOWN – A public hearing on the proposed Dunkin Donuts/Baskin Robbins at the corner of Route 28 and Walnut Street will be held by the Historic Preservation and Architectural Review Board at 5 p.m. on Tuesday, Oct. 8 at 5 pm in the Village Hall board room.

Last month, Bohler Engineering revealed plans for the coffee shop/ice cream parlor to HPARB, but was asked to make changes to the design to make it better fit within the neighborhood.

Cooperstown residents should stand up against the Baskin Robbins/Dunkin Donuts franchise proposed for the corner of Walnut Street and Route 28.  Our town has consistently resisted the invasion of huge corporate franchises for decades, and we should oppose this incursion into our small village as well.  So far, we have kept McDonald’s and Pizza Hut at bay, by keeping them several miles outside of town.

Anyone who drives around the town knows what a nightmare it is to get from Walnut Street to Route 28 during the Dreams Park season, when there is an unending line of traffic coming south on Route 28.

Putting a junk food franchise on that corner is not only going to make the traffic even more of a nightmare, but it is also going to divert tourists before they reach Main Street, where they might patronize some of our local businesses like Schneider’s Bakery, Danny’s Market, The Inside Scoop, Doubleday Café, Stagecoach, etc.

I’ll admit that Main Street has declined a bit since I grew up here in the 1970s, when we had two supermarkets on or near Main Street (the Victory and A&P), three hardware stores, a shoe store, and Newberry’s Department Store, which transformed into the Cooperstown General Store in later years but is now defunct and currently only hosts photographs related to the Hall of Fame and other local attractions.

Nowadays you have to travel to Oneonta for a lot of things you used to be able to buy right on Main Street, unless you’re looking for baseball souvenirs, of course.

Nevertheless, if we open the floodgates to trashy fast food franchises our town is going to be transformed into just another mass-produced consumption economy that will leave us looking no different than any other small town across America that has sold out their mom and pop stores to kneel at the feet of corporate giants that couldn’t care less about our local businesses.

Let’s not bow to the WalMart-ization of Cooperstown.  Let your representatives know that you do not want corporate franchises anywhere near our lovely little town.

COOPERSTOWN – Cooperstown citizens may weigh in on proposed a co-branded Dunkin Donuts/Baskin Robbins on the corner of Walnut and Chestnut streets when the Historic Preservation & Architectural Review Board at a public hearing at 5 p.m. Tuesday, Oct. 8.

“We hope this will be attended by the people whose properties this will impact,” said board member Roger MacMillan. “And our board decision will be made based on the principles of compatibility.”

END_OF_DOCUMENT_TOKEN_TO_BE_REPLACED

COOPERSTOWN – The Dunkin Donuts/Baskin Robbins co-branded outlet and Main and Walnut is on the Historic Preservation & Architectural Review Board agenda at 5 p.m. today, where representatives from Bohler Engineering, retained by Dunkin Brands Inc., will present on the proposed project.  The H-PARB meets in the trustees’ meeting room on the lower floor of 22 Main St.

State police report they were dispatched Sunday to the doughnut shop on a report the girl, unhappy with an order she had made at the drive-thru, struck the employee and broke items in the store.

When another customer took a picture of the license plate, the girl and a 17-year-old girl also hit the customer, police said.