The plane from Houston, Texas touched down Wednesday afternoon at the Albany International Airport not 24 hours after the Atlanta Braves dispatched the Houston Astros in six games to win Major League Baseball’s 2021 World Series, and on that flight was an important duffel filled with artifacts destined for the National Baseball Hall of Fame and Museum in Cooperstown.

An enthusiastic and knowledgeable gaggle of young baseball players from suburban Albany schools crowded around Hall of Fame Vice President for Communications and Education Jon Shestakofsky as he unpacked the precious parcel and displayed the items for the wide-eyed boys. He tried to quiz them, but, with every item he showed, at least one baseball fan was far ahead of him and knew every last detail of the Braves’ and Astros’ championship seasons. END_OF_DOCUMENT_TOKEN_TO_BE_REPLACED

Largely overlooked by the voting members of the Baseball Writers Association of America in his first year of eligibility in 1994 Simmons received just 3.7% of the requisite 5% in order to remain on the ballot.

Simmons spent a generation in candidacy purgatory until his name was included on the Modern Era Committee ballot for the first time in 2018, falling one vote shy of the 12 needed to gain the 75% necessary for election. The third time proved to be a charm for Simmons who received 13 votes on the 2019 ballot, joined by long time MLBPA (union) Executive Director Marvin Miller. END_OF_DOCUMENT_TOKEN_TO_BE_REPLACED

NO ONE WINS PLAQUE IN HALL

Perhaps No Inductees Will Make It Into Hall

Will Make It Into Hall

COOPERSTOWN – It’s a novelty to have the Baseball Hall of Fame announce its Class of 2021 in the Hall of Plaques, as it plans to do at 6 p.m. today – but there may be no one to announce, according to Jeff Katz, former mayor, baseball writer and Friends of Doubleday Field president.

He noted that, generally, support for prospective Hall of Famers tend to dip over time.  For instance, Kurt Schilling, the front-runner for this year’s class, has had 74 percent support from the Baseball Writers Association of America, one point less than needed to enter the Hall.

END_OF_DOCUMENT_TOKEN_TO_BE_REPLACED

The Hall of Famer broke MLB’s all-time home run mark on April 8, 1974, with No. 715 surpassing Yankees legend Babe Ruth. Aaron overcame death threats as he was fighting to break the mark.  He retired with 755 home runs.  His record was broken decades later by Barry Bonds.

Inducted into the Hall of Fame in 1982, his first year of eligibility, he was a common sight on Cooperstown’s Main Street during Induction Weekend for years.

CHECK BACK FOR MORE DETAILS

Dies In California At 75

COOPERSTOWN – Don Sutton, who never missed a turn in the rotation in 756 big league starts, passed away this morning at his home in Rancho Mirage, Calif., after a long battle with cancer. He was 75 years old.

“Don Sutton’s brilliance on the field, and his lasting commitment to the game that he so loved, carried through to his time as a Member of the Hall of Fame,” said Jane Forbes Clark, National Baseball Hall of Fame & Museum chairman.

“I know how much he treasured his moments in Cooperstown, just as we treasured our special moments with him. We share our deepest condolences with his wife, Mary, and his family.”
END_OF_DOCUMENT_TOKEN_TO_BE_REPLACED

COOPERSTOWN – Al Michaels,  known for his many years calling play-by-play of National Football League games, is 2021 recipient of the Ford C. Frick Award for excellence in broadcasting, the Baseball Hall of Fame announced today.

Michaels will be recognized during the Hall of Fame Awards Presentation on Saturday, July 24, as part of Hall of Fame Weekend 2021. Michaels becomes the 45th winner of the Frick Award, as he earned the highest point total in a vote conducted by the Hall of Fame’s 15-member Frick Award Committee.

END_OF_DOCUMENT_TOKEN_TO_BE_REPLACED

COOPERSTOWN – Lt. Gov. Kathy Hochul had a message for New Yorkers – the best way to vacation is right in your backyard.

“I live in the western part of the state, and I’m surprised at how many of my neighbors have never been to Niagara Falls,” she said. “There are no lines! This is a chance for 19 million New Yorkers to discover New York State.”

Hochul held a roundtable Monday, Aug. 10 at the Baseball Hall of Fame as part of her statewide “Staycation” tour, which has also taken her to Saratoga Springs, Finger Lakes and Thousand Islands to promote in-state tourism as an increasing number of states – currently 33 – are on the travel advisory list.

“It’s always a joy to come back to Cooperstown,” she said. “I had breakfast at what must be the world’s smallest diner, and I realized that this is the place where you come to feel young again, where you can renew your spirits.”

Representatives from the Glimmerglass Festival, the Farmers’ and Fenimore museums, Brewery Ommegang and the Cooperstown Chamber of Commerce were on hand for the event, as was Mayor Ellen Tillapaugh Kuch.

“What hasn’t been cancelled is our natural beauty,” Hochul said. “Recreation is soaring, the boat launch has seen their traffic triple, and the economic benefits of the outdoors can continue.”

After more than 100 days of closure, both the Hall and the museums opened with new cleaning protocols, social distancing and mask requirements.

And Tim Mead, Hall of Fame president, said some of the newly implemented measurements will benefit the Hall going forward. “Timed ticketing has been great, and we’ve done a lot of external outreach to our memberships,” he said. “We will all grow from this.”

David Neil, Ommegang’s hospitality director, said the brewery switched to canning more beer after restaurant businesses dried up, reducing the need to buy kegs. “The majority of our business was in kegs,” he said. “But now, we’re canning more than we ever had; we completely changed our whole production.”

Ommegang also implemented curbside pickup, and recently reopened its café for outside dining, including the weekly Sunday Brunch Bingo. “We can hold up to 78 people in our pavilion, and we’ve just seen an increase every week,” he said. “And all our reviews have talked about how safe people feel on our grounds.”

Francesca Zambello, Glimmerglass Festival’s music & general director, said the shutdown has allowed the festival to rethink its own marketing.

“Fifty percent of our visitors come from two hours away,” she said. “We’re starting to look at how we can create outdoor programming to market to people who have the Glimmerglass Festival on their bucket list, but who never come here.”

Online programming has been launched, the the Young Artists’ training program is continuing.

In touting the statewide infection rate of less than one percent, Hochul also acknowledged the work that tourist attractions like the Hall and the museums are doing to keep visitors safe inside.

“Seeing everyone in their masks warms my heart,” she said. “We want people to know that they can come here and be safe.”

“I had planned to visit my kids in other states,” she added. “But instead, I’m coming to Cooperstown.”

Voices Of The Game Features

BASEBALL – Noon. Virtual Voices of the Game to present Hall of Famer Dave Winfield reflecting on Marvin Miller, 2020 inductee to Baseball Hall of Fame, and his impact on labor and baseball. Visit baseballhall.org/events/virtual-legends-of-the-game-Marvin-Miller?date=0 for details.

END_OF_DOCUMENT_TOKEN_TO_BE_REPLACED

COOPERSTOWN – Congressman Antonio Delgado, D-19, today announced $300,000 in federal funding for the National Baseball Hall of Fame for “virtual education” and access to the digital collection.

The money will come through the National Endowment for the Humanities and was approved through the House and Senate through the bipartisan CARES Act.

Calling the Hall “an iconic landmark and driver of the local economy,” Delgado said “it is vital for the long term well-being of our economy that we support the jobs and build accessibility” there.

END_OF_DOCUMENT_TOKEN_TO_BE_REPLACED

Even This Late In Season,

COOPERSTOWN – At Mickey’s Place, Vin Russo, dean of the baseball merchants, pointed out that, before Dreams Park began hosted baseball tournaments early in the month, “this week is when the season began.”

In other words, the Hall of Fame’s announcement it will reopen this Friday from the coronavirus pause won’t be like recent summer seasons for Main Street’s baseball merchants.  But this used to be typical, and businesses survived, even thrived.

END_OF_DOCUMENT_TOKEN_TO_BE_REPLACED

COOPERSTOWN – Marvin Miller, who as leader of the MLB Players Association established free agency, turning players into tycoons, will enter the Hall of Fame in the Class of 2020.  He will be inducted posthumously Sunday, July 26.

He was elected yesterday by the Modern Era Committee, along with Ted Simmons, 70, an eight-time All-Star catcher who played 13 seasons with St. Louis.

The Baseball Writers of America’s picks, expected to include Yankee Derek Jeter, will be announced in  mid-January.

HoF INDUCTEES TO BE NAMED 1/21

COOPERSTOWN – Five-time World Series champion Derek Jeter heads a group of 18 new candidates on the 2020 Hall of Fame ballot that is being mailed this week to more than 400 voting members of the Baseball Writers’ Association of America.

The results will be announced Jan. 21 live on the MLB network.

Jeter spent all 20 of his major-league seasons with the Yankees and finished with 3,465 hits, the sixth highest total in history.

END_OF_DOCUMENT_TOKEN_TO_BE_REPLACED 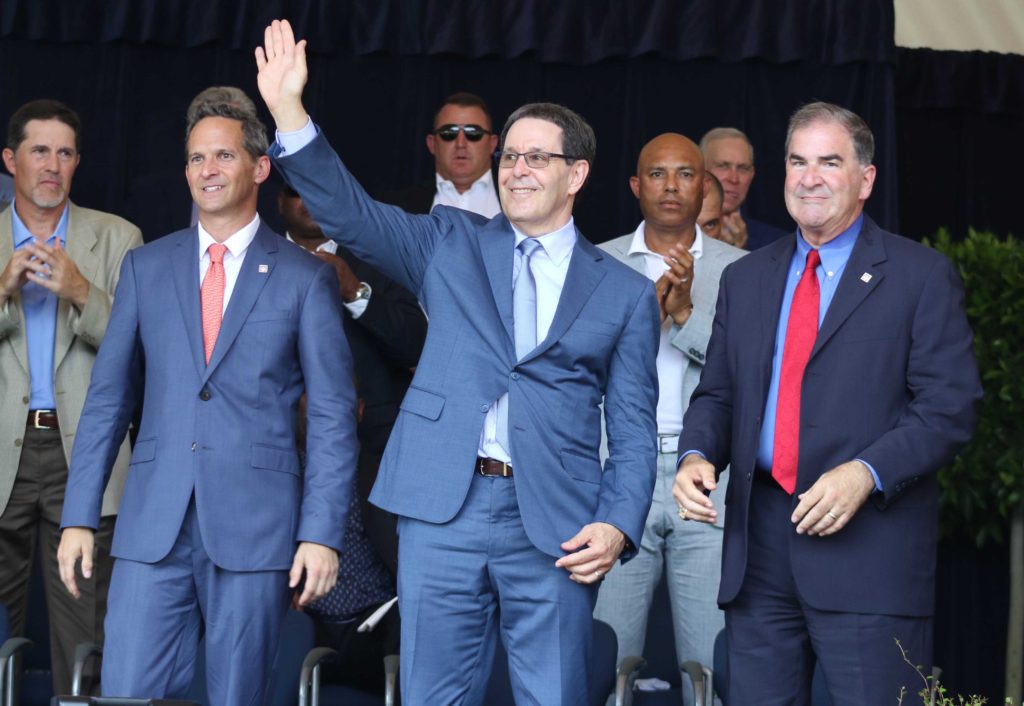 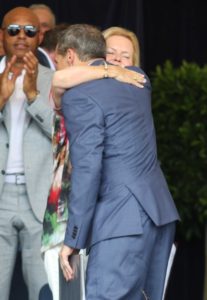