Two months after getting its special-use permit from the Cooperstown Board of Trustees, the Chestnut Crossing apartment complex at 10 Chestnut St. is mostly finished at the municipal level.

According to village documents, the project has had public hearings and gotten approvals from the village committees that must approve various parts of the project, including its architecture, fencing, parking, sidewalks, streets, lighting and drainage. END_OF_DOCUMENT_TOKEN_TO_BE_REPLACED

COOPERSTOWN — About 50 village residents gathered Monday, June 15, at a residential space at 20 Lake Street to hear a detailed presentation and ask questions about a debated proposal to build a 13-unit rental apartment on several pieces of property on Chestnut Street.

Josh Edmonds, a Cooperstown native who is the owner of Simple Integrity Construction, and Francesca Zambello, the artistic and managing director of The Glimmerglass Festival, detailed their private partnership and its plans to develop the three pieces of property they own—two on Chestnut and one on Pine Boulevard, behind it—into one housing project.

END_OF_DOCUMENT_TOKEN_TO_BE_REPLACED

COOPERSTOWN – The developer of “The Grove,” Josh Edmonds, said today he has withdrawn his application for the 12-unit apartment house at 10 Chestnut St.

“It didn’t seem productive to keep the application in progress at this moment,” said Edmonds, a partner in Simple Integrity, the contracting and construction company.

The project, located between Chestnut Street and Pine Boulevard, a half-block up from Lake Street, drew an outpouring of opposition from neighbors at the June meeting of the Village Board.

END_OF_DOCUMENT_TOKEN_TO_BE_REPLACED

“We are shocked and deeply disappointed that the village would consider a 12-unit apartment complex within a block of primarily single-family homes,” said Sherrie Kingsley, co-owner of The Inn at Cooperstown with husband Marc. “Is there really a need for more housing in Cooperstown?

“Surely there are locations in other areas of the village or the outskirts of the village that would provide a much better fit for an apartment complex if one is truly needed,” she said.

END_OF_DOCUMENT_TOKEN_TO_BE_REPLACED 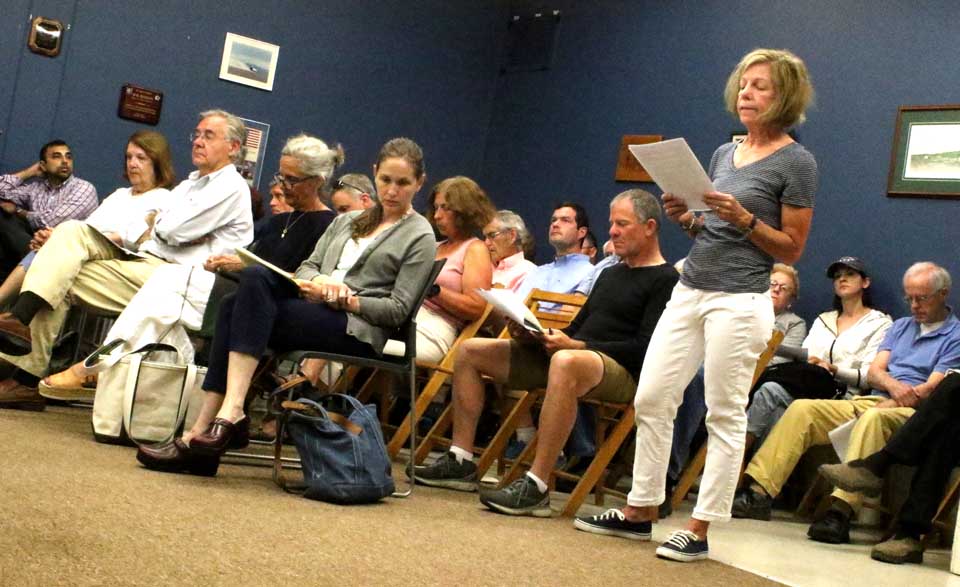 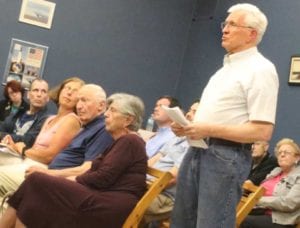 Sherrie Kingsley, above, proprietor of  The Inn at Cooperstown with her husband, Marc (seated to her right), reads a three-page letter to the Village Board this evening raising concerns about impacts of The Grove, a 12-unit apartment complex developer Josh Edmonds is proposing at 10 Chestnut St., next to single-family

homes on lower Chestnut and Pine Boulevard.  Several neighbors seconded Kingsley’s concerns. Others, including Bill Rigby, inset at right, opposed a PDD (a planned development district) that would allow expanded parking at New York Pizzeria, across Elm Street from his house.  On a third matter, Eric Olson, inset left, said loud music and noise emanating from the Pratt Hotel, a tavern across from his Pioneer Street home and business, is awakening him as late at 3 a.m. as much as three times a week; he calls police, to no avail.  Mayor Ellen Tillapaugh Kuch reassured the crowd that The Grove must go through several steps and public input before a decision is made.  Olson said he was looking for help from a 2001 noise ordinance; Tillapaugh advised him that a new law setting noise levels at an 80-decibel maximum may help him, but that devices to read noise levels has not yet arrived at Village Hall.  (Jim Kevlin/AllOTSEGO.com)

COOPERSTOWN – Josh Edmonds has built the future at 45 Delaware St.

• POINT ONE: A partner in the Simple Integrity construction firm, Edmonds has been paying $4,000 a year to heat his home in Springfield Center.  The 2,600-square-foot house he’s just finished building at 45 Delaware will cost $254 a year to heat.

A home like the one he’s just completed – it’s on target to be certified by the Passive House Institute, the international gold standard – costs 3 percent more to build than a standard house.

END_OF_DOCUMENT_TOKEN_TO_BE_REPLACED

Sidebar to: He’s Built The Future

►One, Thermal Bridging
Nothing outside is connected directly with the interior, accomplished by a five-layered wall.
From the inside out, that wall consists of a layer of 2x6s; a layer of ZIP System sheathing and tape; 12-inch-deep I-joints (plenty of room for insulation); a rain screen (the criss-cross wood pattern you may have noticed driving by), and siding that breaths.

►Two, Continuous Insulation
In effect, a coat of insulation on the slab, walls and roof create an enclosed box, with a truss roof placed on top.

►Three, air sealing
In a typical house, Edmonds said, air changes 5-12 times per hour. The New York State building code has tightened that to three times per hour in new construction.
The Passive House standard is .6. The rate at 45 Delaware is .2.

►Four, high-performance windows and doorsAll doors and windows have three panes, and are sealed so, when closed, no air leaks in. “These windows are on a par with Marvin windows for cost,” Edmonds said during a tour of the home.
They are inset from the highly insulated exterior wall, so they conduct less cold than if they were flat against the outside wall.

►Finally, five: heat-recovery ventilation
Houses need fresh air for the occupants. Passive houses provide that through HRV, which allows energy to pass between two streams of air without mixing the air. In the winter the warm stale air transfers its energy to the cold incoming fresh air; vice versa in the summer. HRVs have efficiency ratings of 65-92 percent, depending on the model.

EXCLUSIVE IN THIS WEEK’S PAPERS

House Of The Future

STAY UP TO MINUTE AT WWW.ALLOTSEGO.COM

COOPERSTOWN – For Josh Edmonds, the lot at 10 Chestnut St. represents a chance to solve two problems in the village – adding housing and reducing energy consumption.

“The village needs long-term rentals,” he said. “And I see a need for more energy-efficient construction.”

Edmonds, a passive-house consultant through, Simple Integrity, his contracting company, has proposed a two-story, 12-unit building on the lot at 10 Chestnut St, next to the Inn at Cooperstown.

At the Village Board meeting on Tuesday, May 28, Edmonds revealed details about the proposed project:  12 two-bedroom units, with the six apartments on the first floor designated as handicap-accessible. There will also be 24 parking spaces.

END_OF_DOCUMENT_TOKEN_TO_BE_REPLACED

EDMONDS BRIEFS TRUSTEES ON ‘THE GROVE’

ON NEWSSTANDS THIS AFTERNOON