No Supreme Court nominee yet, but McConnell already on the cusp of having the votes

Woodward on Trump's handling of Covid-19: 'I've never seen anything like it'

Former Iraq POW Jessica Lynch on what helps her thrive after captivity: 'Every day is a constant reminder' 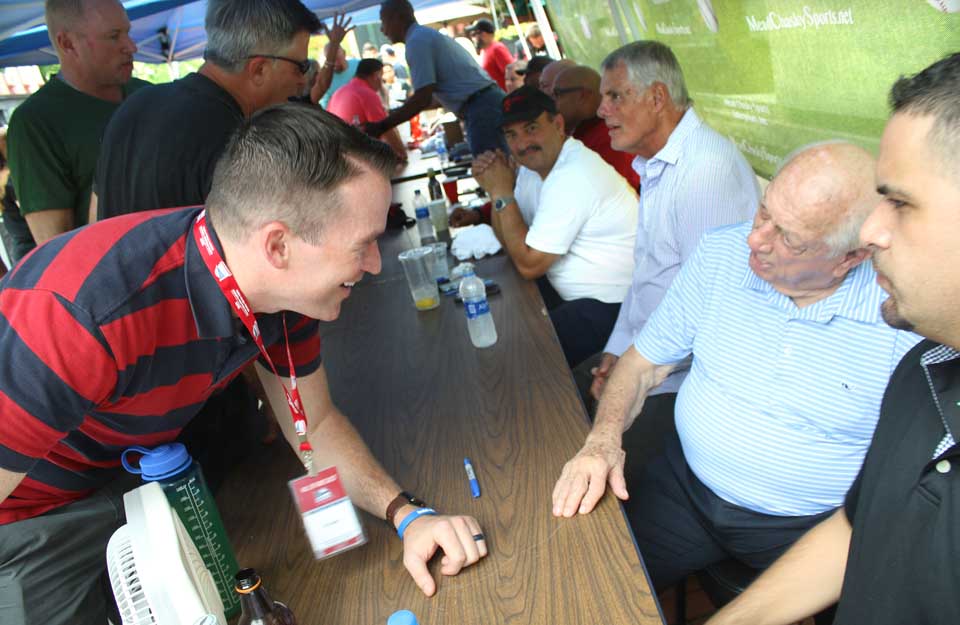 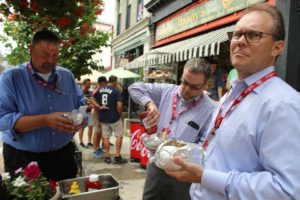 P.J. Carter, left, son of famed Expo and Met Gary Carter, gives his dad’s best wishes to Tommy Lasorda, famed two-decade manager of the L.A. Dodgers, who is signing autographs today on Main Street, Cooperstown. Behind Lasorda is another great, Lou Pinella, who finished up his 16-year playing career as a Yankee. Crowds are bigger than usual for a first day of Induction Weekend, said Vinnie Russo, proprietor of Mickey’s Place who can compare hour-by-hour records from past years, and are only going to grow tomorrow as Induction Weekend gets underway in earnest. Inset, part of the Hall of Fame’s brain trust – from left, Vice Presidents Ken Meifert, sponsorship & development; Doug Jones, finance & administration, and Sean Gahagan sponsorship & development – slipped out for a quick hot-dog lunch in front of Danny’s Place. (Jim Kevlin/AllOTSEGO.com)

With Web, Hall of Fame Aims to Be World’s Home Plate

With Web, Hall of Fame

Aims to Be World’s Home Plate

One moment next summer, you’re walking past a series of apartment buildings on Brooklyn’s Sullivan Place, former home of Ebbets Field.

The next, your phone rings, and you get a digital history lesson about the former home of the Brooklyn Dodgers, now the site of the apartments you’ve been walking right past. Your Baseball Hall of Fame app, entry point to 40,000 items, some of them almost never seen, is working.

Walk by Wrigley Field, your phone will ring again. Or Babe Ruth’s birthplace in Baltimore. Or any other place related to baseball history, whether you know it or not.

Your phone will ring for a baseball briefing.

“We’re launching an app early next spring that will use GPS coordinates, so notification will pop up with items about games and people who played there,” said Ken Meifert, vice president/sponsorship & development. “It takes the Hall of Fame to you and makes it relevant.”

It’s one piece of the Hall’s latest undertaking, a full-scale digitization project that will revitalize their website, preserve their archives and launch the mobile app designed to bring history right to your fingertips.

The Hall received a $750,000 grant in the latest round of CFA funding, the largest of a dozen grants the Cuomo Administration funnels into the region through the Mohawk Valley Regional Economic Development Council.

“We’ve got 40,000 items in our archives and only 12 percent of those are on display,” said Ken Meifert, vice president/sponsorship & development. “To digitize these items and make all of them available engages people with the Hall.”

If the website and app are a repository for content and a way to deliver it, the latest money will be used to create the content itself. “We want it to have a curatorial voice,” said Meifert. “Most fans want to know the story behind the object – it’s not just an old baseball bat, it’s about what the story behind that bat represents. That’s where the content comes to life.”

Also being considered is a 3-D scanner to allow visitors to the online archives a chance to look at the object – say, a baseball signed by a World Series winning team – from all sides.

And while it may be comfortable to look at the Hall from your living room sofa, Meifert believes it will bring visitors into Cooperstown. “The more someone sees it on their monitor, the more likely they’ll come to Cooperstown,” he said. “They know there’s no replacement for standing in front of Babe Ruth’s jersey, so they’ll get the family in the car and come to Cooperstown.”

It will also enhance the experience while in the museum. “If you’re standing in front of Willie Mays plaque, then you can pull up a video of him playing.”

The Hall will also continue and expand its partnership with Google’s Cultural Institute & Online Hangout Platform. “Two of our photo exhibits – “Picturing America’s Pastime” and “Images of Osvaldo Salas” – are part of their Cultural Institute as a curated, virtual presence,” said Brad Horn, vice president/communication & education. “And through Hangouts, we can share our education programs, like our Artifact Spotlight, with a virtual audience, like a video conference program.”

But it’s also about preservation. “The digital archives might outlive the actual artifact,” said Horn. “So many of these items are fragile, and we’ll be able to photograph them in the best shape they’ll ever be in.”

It’s a long-term goal, but one both Horn and Meifert are convinced will fortify the Hall’s legacy. “It can’t be achieved overnight, but it will ultimately define who we are for the next generation,” said Meifert.