Walk With Friends,
Sign Up For Thanksgiving Dinner,
Or Adopt a Family For Christmas Giving

DEADLINE—Register for free Thanksgiving dinner for delivery or take out from The Lords Table. Sponsored by St. Mary’s Church and the Oneonta Community. For registration contact Deb Bruce at (607) 433-0356 or e-mail oneontathanksgiving@gmail.com

BE AN ANGEL – The Angel Tree Program has returned. The community is invited to adopt a family and then find Christmas gifts for each of the children listed. Gifts are due unwrapped and without tags to either the office of The Freeman’s Journal at 21 Railroad Ave. in Cooperstown, or at the Salvation Army Church at 25 River St. in Oneonta. Visit allotsego.com/angel-tree-program/ for details

In 2008, Joyce Mason, working as a missionary in Honduras, got an urgent message that she was needed at home in Oneonta.

“Opportunities for Otsego had decided to give the Lord’s Table two weeks’ notice that they would no longer run it,” she said. “And although they tried to limp along, it wasn’t enough.”

After locating a landline phone to talk with the staff at St. James Episcopal Church, Mason came back to Oneonta as director of the nightly feeding ministry and the Loaves & Fishes food pantry.

And at the end of the year, Mason will retire from feeding families, the elderly and the disenfranchised after 22 years of service.

“If people are hungry, you have to feed them,” she said. “That’s important. It doesn’t matter if they’re rich or poor or sideways. Anyone can come.”

A native of Forrest Hills, Mason moved to Sidney with her husband, James. He passed away in 1995, leaving her with their two sons, James and Peter.

“After they graduated high school, I became a missionary,” she said. “And I was sent to Honduras.”

But when she got back, there was much work to be done to get the pantry and the kitchen where they needed to be to serve the city’s hungry.

“When I got here, it was not a happy situation,” she said. “So much of what was in the freezers wasn’t labeled, and I had to throw everything in the dumpster. It made me very sad.”

She immediately set to restocking the fridges. “I ordered food from the Regional Food Bank and, sometimes, from restaurants or catered events, like weddings,” she said. “And I started calling every group I could get to help serve the meals.”

With the First United Methodist Church hosting Saturday’s Bread, and the Salvation Army offering the “Meal With a Message,” a hot meal is offered free of charge seven days a week in the city.
“There is no place else between Albany and Binghamton that does that,” Mason said. “And in a town this size, we’re absolutely blessed to have three meal service programs.”

In 2018, Mason spearheaded the formation of the Otsego County Hunger Coalition, creating a network of all the food pantries, feeding programs and farmers’ markets in the county to make sure everyone has access to food wherever they may be.

But there have been challenges along the way. “After the flood of 2011, we were the Otsego County Disaster Feeding program,” she said. “St. Mary’s was housing people, many of them from

Lantern Hill” – the Southside trailer park – “and we had to feed them three meals a day.’

She was preparing lunch for the flood victims one afternoon when she smelled smoke. “The food pantry was on fire,” she said.

Rather than shut down, the pantry moved into St. James and continued its ministry. “We were closed from Friday to Tuesday,” she said. “We had to keep it going.”

The pantry was rededicated in March 2012, and Mason was lauded by Father Kenneth Hunter for continuing to feed the most needy among them.

And this year, the ministries had to adapt to the COVID-19 pandemic, which forced the Lord’s Table to go to take-out only.

This year, 3,642 households have received food, the highest number in five years.

“It’s tough for the older people especially,” she said. “They need that socialization of sitting down and having a meal with somebody. It’s not available to us right now, but as soon as we can reopen, we will.”

It has also limited the food available at the pantry. “We’re having a lot of trouble getting beef or pork,” she said. “It’s just not available.”

While Mason is leaving her post at year’s end, she doesn’t expect to stay put for long in her retirement. “I’m a missionary at heart,” she said. “I go where I’m needed.” 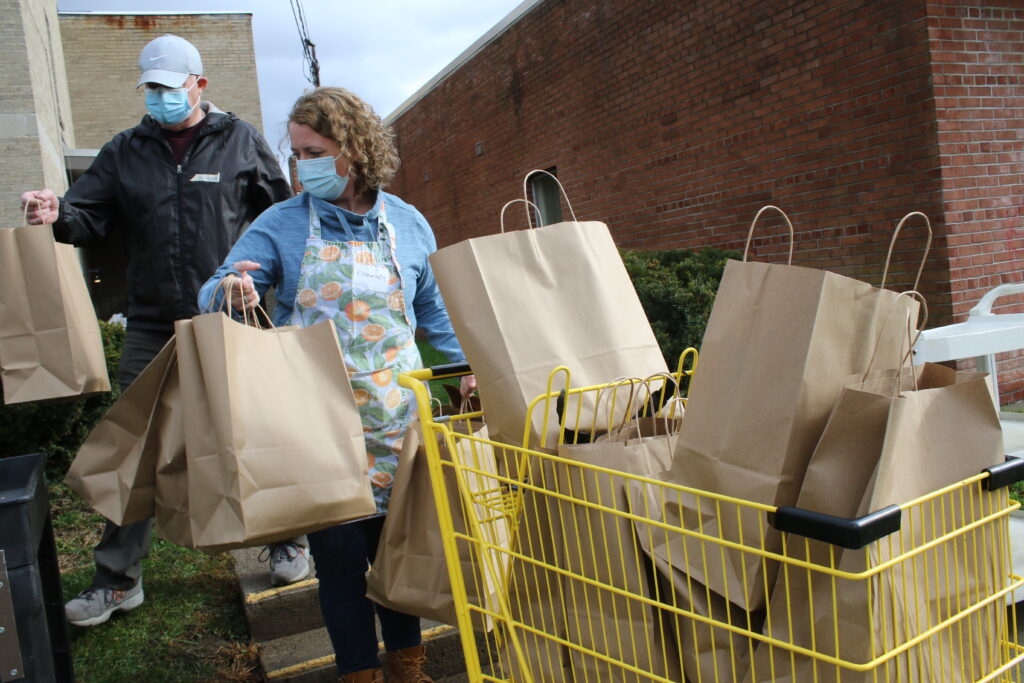 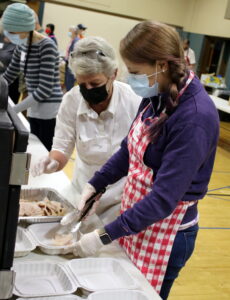 In a collaboration of St. Mary’s Catholic Church and the Lord’s Table, 600 meals – turkey with all the trimmings – had already gone out the door for delivery by noon Thanksgiving Day, when curbside pickup began. Above, Volunteers Rosemary Collie and Keton Kling, both Oneontans, shuttles  bags of food to the Lord’s Table.  “We were averaging about 10 meals a minute.” said event overseer Mary Southern, seen at right advising Joyce Collier.  “This year people are in even more need and we are making sure they all have food This year we planned for 800 meals.” The only lull in the action came when the turkey ran out with a handful of dinners to go. Some volunteers offered up their own meals without hesitation. Others were dispatched to Hannaford and returned with enough turkey to complete the meals. “This is the first year we ever ran out of turkey!” said Southern, “But we will provide!” Volunteer driver Paul Patterson, his car filled with meals, rolled his window down on the way to deliver meals saying, “Mary did an amazing job. It was like clockwork. Henry Ford would have been proud!” (Ian Austin/AllOTSEGO.com)

SCAVENGER HUNT – Thursday – Sunday. Participate in Thanksgiving weekend scavenger hunt. Find items indoors and out on the list, post them to facebook with the tag #OCCAfoundit for the chance to win prizes. Presented by Otsego County Conservation Association. 607-547-4488 or visit occainfo.org/holiday-2020-programming/

END_OF_DOCUMENT_TOKEN_TO_BE_REPLACED

Community Gathers To Give Thanks Together

To Give Thanks Together 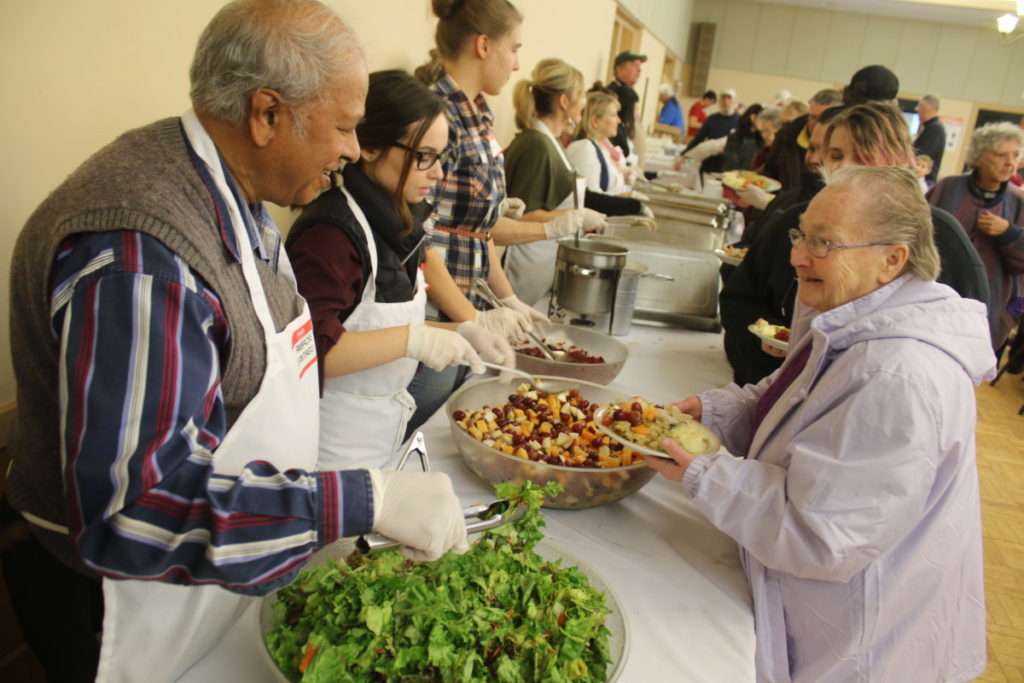 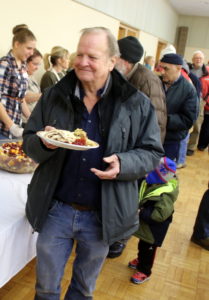 The tables and plates were packed as people flocked to the annual Thanksgiving Day Community Dinner this afternoon at the The Elks Club and sponsored by St. Mary’s Church and The Lord’s Table. Above, event volunteers Ambrose Santiago, Oneonta, and Emily Berrios, Oneonta, serve salad and fruit to Theodora Barber, Oneonta during the first hour of the doors opening. At right, Bill Abbott, Oneonta, goes to find his seat with a full plate. (Ian Austin/AllOTSEGO.com) 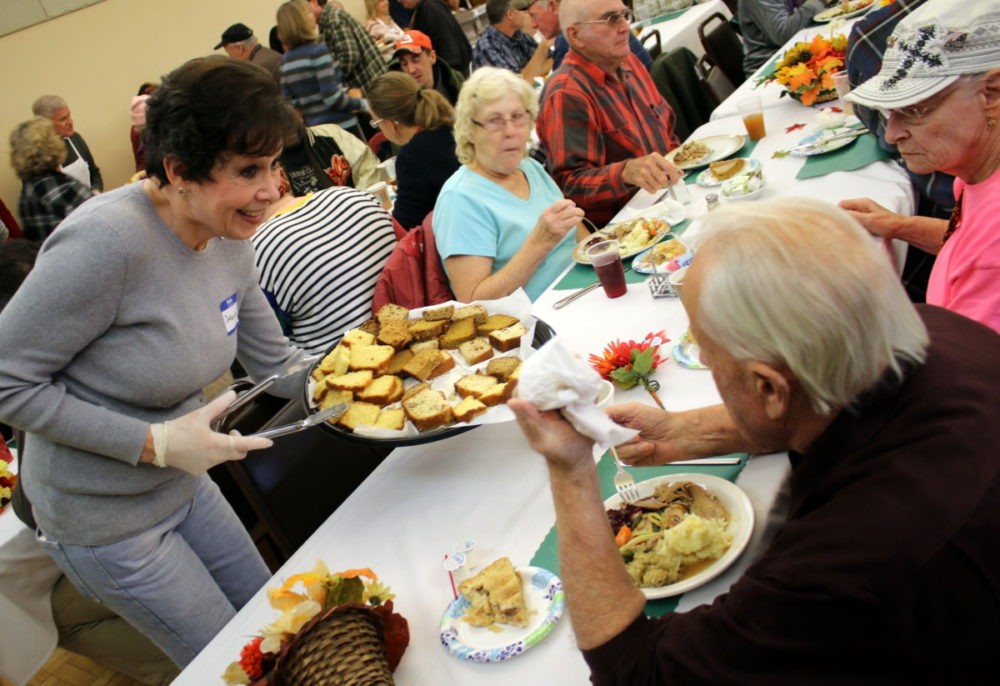 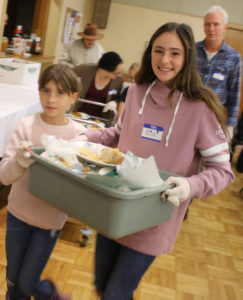 St. Mary’s and the Lord’s Table hosted their annual community Thanksgiving dinner at the Elk’s Club, who donated their ballroom for the event this afternoon. 200 people came through to enjoy turkey with all the trimmings alongside family and friends with over 100 take-out orders and deliveries enjoyed as well. Above, volunteer Deborah Grundleger, Gilboa, offers a selection of sweetbreads to Fred Packer and Joan Wenck of Portlandville, while Juliette Bergin and Emilia Greco, visiting from long Island, cleared plates and brought them to the dishwasher. (Ian Austin/AllOTSEGO.com)

OPERATION CHRISTMAS CHILD – 4-6 p.m. Pack a shoebox with items that will bring joy to children as they are delivered around the world. Collection point at Main St. Baptist Church, corner of Main and Maple Sts., Oneonta. Info, @ www.msbchurch.org/occ or email msbc@msbchurch.org or call (607)432-5712