League of Women Voters talk democracy at the local level 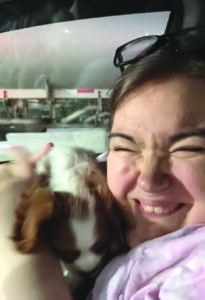 Her time on Earth was far brief, but her legacy of love and caring goes on.

Cherished Vincenza Alessi, 28, became an angel on Sunday, April 10, after a two-year battle against a rare blood disorder. Heaven is so lucky to have her home.

Vincenza was a 2012 graduate of Cooperstown Central School, earning her degree in psychology and women’s studies from the State University of New York at Oneonta. She recently had earned her master’s degree in special education from Grand Canyon University.

She loved teaching and her students adored her. She found great joy in the young children she was able to help and looked forward to a long career using her talents in her chosen field. Without knowing, Vincenza even taught the dieticians at New York Presbyterian Hospital how to expand and modify their menu selections; as her health deteriorated and she was eating less, she would ask her nurse for simple foods not on the menu: pasta and butter, pasta and red sauce, string cheese, salad with chicken. When she returned to New York Presbyterian for the final time several weeks ago, staff reached out to proudly show her a brand-new menu for patients – one filled with the very dishes she had requested, now a part of the Hospital’s regular offering.

END_OF_DOCUMENT_TOKEN_TO_BE_REPLACED

“We brought Vincenza home to Cooperstown from Columbia Hospital in New York City about a month ago,” said Ln Alessi, Vincenza’s mother.  “Her only option left is to have a second bone marrow transplant.  We brought her home to strengthen her emotional, physical and psychological health.  She must get stronger in all of those categories in order to have that second transplant.”

Since coming home to Cooperstown, the Alessi family goes to Bassett Medical Centers Oncology department three to five days a week, depending on Vincenza’s hemoglobin and platelet counts.  “We spend several hours at the center just for the transfusion, then another half-hour to make sure she doesn’t have a reaction.”

“These transfusions are supposed to increase blood counts so she can live; the cells carry oxygen to her system,” Ln said. “After the transfusions, Vincenza’s cells are not retaining the oxygen like they are supposed to. Anything below 5.2 on the hemoglobin count is considered dangerous.  A 4.5 is extremely dangerous.”

“She is tired all of the time, she has very little energy,” she said. “She has total body pain; everything hurts all of the time because of the low oxygen levels in her system.”

END_OF_DOCUMENT_TOKEN_TO_BE_REPLACED

“Be The Match” Bone Marrow Drive

In honor of Vincenza Alessi, a 2012 Cooperstown Central School graduate ill with bone marrow failure of unknown origin, the school will host a bone marrow drive on March 29 from 3 p.m. – 5:30 p.m. in the school auditorium.

Those interested in donating must be between ages 18 and 40.

Text VincenzaCCS2012 to 61474 to register to have a swab taken at the school or to receive a test kit in the mail.