The Wisdom Of Sam Nader

At the time Sam Nader’s Oneonta Athletic Association was affiliated with the Detroit Tigers, the MLB team allocated a certain number of baseballs per season to its Minor League teams.

Anything over was a local team’s responsibility.

At the end of the Oneonta Tigers first season, Sam Nader tallied baseballs used, and mailed a check.

The phone rang. It was Detroit. “What’s this for?” he was asked.

“I’m sending the check back,” said the nonplussed accountant. “None of our teams ever paid anything like that.”

That, according to his son John, was one of the cornerstones of the Wisdom of Sam Nader, the former mayor and Oneonta Yankees owner who passed away Tuesday, Feb. 9, at 101, in his home at 96 River St. in his beloved Sixth Ward.

Other guiding principles – common in his father’s generation, said the son – were family, work ethic and community, forged growing up in the Depression and by the hardships of World War II.

“He was part of a generation that was very, very civically mind,” said John. 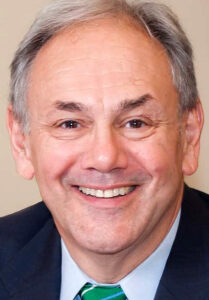 Although Sam spent a career in politics, befriending Bobby Kennedy, then New York State’s U.S. senator, “he did not care, on the local level, about political parties,” said the son.

That was indicated in 1961 when Nader, Republican, was denied his party’s nomination for mayor. The city wasn’t ready for a mayor from the wrong side of the tracks – the Sixth Ward, the “Lower Deck.”

He formed his own Good Government Party, got the Democratic nomination, and won by 19 votes.

But party didn’t matter, John underscored: When the Boston Red Sox pulled its Minor League out of Oneonta after one season, his father lined up 10 investors in one day to bring in the Yankees: five Republicans and five Democrats.

“My sisters and I learned by observation,” said John, himself a former mayor and now SUNY Farmingdale president, adding, “We learned by obeying.”

Still, in an interview after his father’s passing, John could recount a number of quotes that could constitute “The Wisdom of Sam Nader.”

And, his response to his son John, then a county board member thinking of running for mayor: “There are five people who know what this job is like .., and you aren’t one of them.”

(He also told his son, “Just keep in mind: you could lose,” and advised John to prepare to do so graciously.)

The community where Sam Nader thrived is not the Oneonta of today, the son recalled. In those days, people stayed around.

There were thousands of career-long jobs to be had locally – Bendix Corp. in Sidney (now Amphenol), where Sam Nader rose to director of purchasing in a 40-year career, as well the D&H yards, the colleges and Fox Hospital.

If young people they went to college, is was usually SUNY Oneonta or Hartwick College. His father had to drop out of college to help support his family during the Depression, but his short time at Bates College in Maine broadened his outlook.

He joined Bendix before World War II, served as an Army machine gunner in the Battle of the Bulge, and returned to Bendix at the war’s end.

While his personality, political success and ownership of the Oneonta Yankees would help bring the Sixth Ward itself into the city’s mainstream, the first step came in 1954, when he married Alice House, daughter of a prominent doctor and descendant of Oneonta founder Eliakim Ford.

In interviews over the years, Sam would credit his wife with raising his children, John and sisters Alice and Suzanne, his pride and joy, and express regret he didn’t have more time to spend with his growing family.

John has a different take: “She was as passionate about baseball as he was, maybe even moreso.” And she made his political career possible: “She was there to do all the things that he couldn’t do at home” because of his responsibilities.

When Sam organized a dinner at the Armory in 1968 for Bobby Kennedy, the senator recruited Alice to clip the local newspapers and send his office the clippings. She passed away in 1991 in a car crash in Georgia; her husband was also injured.

Another piece of Sam Nader’s wisdom: “If you can’t work with other people, you aren’t going to accomplish anything.”

He proved that in his campaign to build the city airport – renamed the Albert S. Nader Regional Airport in 2016 – which generated some ridicule as “Nader’s Folly,” and was excoriated by Ed More, a popular newspaper columnist in the 1960s.

“My father called Mr. More,” said John. “He took him to the site of the airport and described what would be there.”

As his son describes it, he was the same considerate man all the way to the end.

When a granddaughter arrived in December she found her grandfather had fallen, lying on the floor, the beginning of the end. Sam asked conversationally, “When did you get in?”

The family, well represented by Sam’s children and seven grandchildren, held a small remembrance last Saturday, Feb. 13, a time for reflection. (A larger celebration of Sam Nader’s life may occur next summer.)

The next day, John Nader, reflectively, showed an iPhone photo of his son, Mark, who works for the MLB but still lives in Oneonta, and Mark’s son, Levi Samuel Nader. The story continues.

When David Brenner, a future top administrator at SUNY, had just arrived in Oneonta in 1960, Mayor Nader “asked me to serve on the Reapportionment Board. He gave me a chance. That’s how we became friends.”
Sam would visit Brenner’s wife’s bridge club while campaigning. And again when he won. “That’s the way he was.”

When her girls were young, Sam Nader would invite them and mom Kim Muller to sit in his box at Damaschke Field. “Alice would hold Chloe,” she said.
As a politician, “He didn’t pull any punches. He was kind, but firm. He welcomed everyone. He was not judgmental. And he really loved Oneonta; he loved his family and friends.”