REOPENING DUE NEXT WEEK 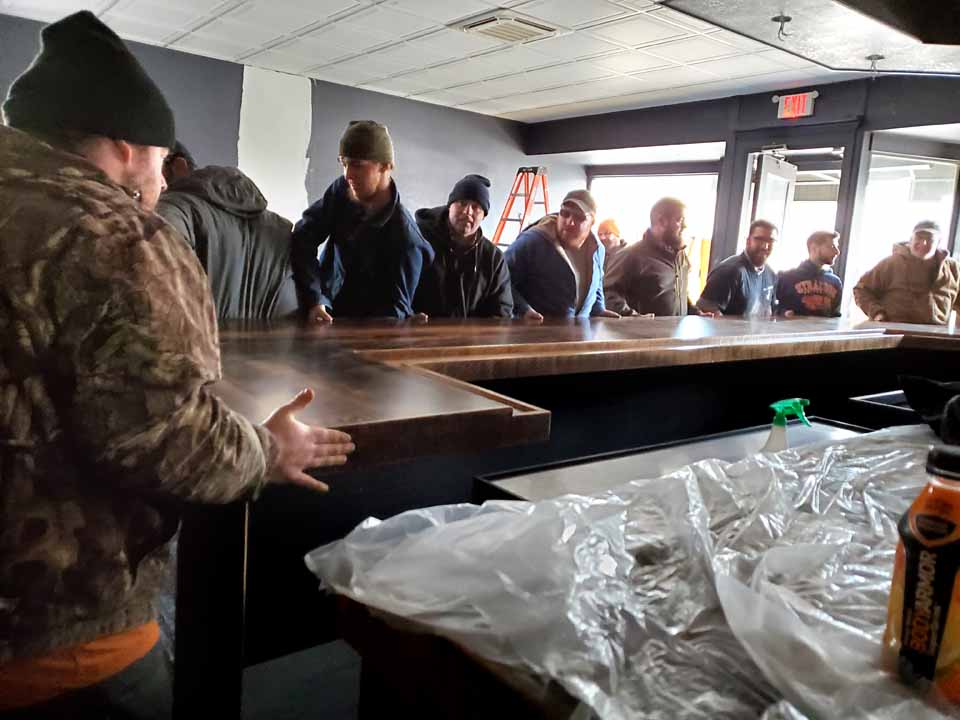 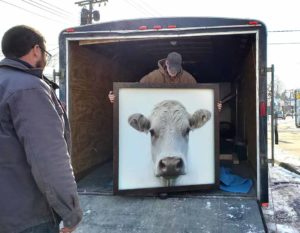 Clerk of the Works Frank Halay, right, directs the installation of the new bar, as a month-long renovations at Mel’s at 22, the Cooperstown hot spot, is nearing completion. The bar was built in Amish carpenter Paul Byler’s shop in the Town of Springfield and transported down East Lake Road at noon today to restaurateur Brian Wrubleski’s establishment.  Next to Halay are Mike Beilby, Sean Murray, Adam Halay, William Bawolak, Shannon Hugick and Jacob Stutzman.   Mel’s regulars have been asking, what happened to the cow?  Inset right, Frank Halay unloads the spruced up painting from the truck, ready to once again hang over Mel’s bar.  The bar and restaurant is expected to be open for business again next Wednesday. (Larissa Ryan/AllOTSEGO.com)

Mel’s, For A Good Meal

COOPERSTOWN – Working in the kitchen at Mel’s at 22 late last week, Brian Wrubleski got the word:  “Somebody’s choking.”

One waitperson had already attempted the Heimlich maneuver, he was told.

Walking out onto the restaurant floor, Wrubleski saw a second waitperson was performing the maneuver on a customer who, with a morsel trapped in his windpipe, had fallen out his chair in the restaurant’s southeast corner.

END_OF_DOCUMENT_TOKEN_TO_BE_REPLACED

At This Year’s Holiday Run

By LIBBY CUDMORE • The Freeman’s Journal

The restaurant, in the space that once housed Sherry’s, a legendary Cooperstown soda shop, opened in early November and in the three weeks, Wrubleski’s cuisine – including specialties like fried pork belly, grilled salmon with Asian-inspired glaze and Southwest-inspired chicken – have drawn rave reviews and a packed dining room.

Wrubleski, a former Webster, Mass., police officer who graduated second in his culinary class from Johnson & Wales, is Bassett’s former head of dining, and worked two years as the head chef at the Otsego Country Club. “My parents were bakers,” he said. “I’m trying to use lots of local foods, and I make almost everything from scratch.”

And it’s a family affair. Daughters Natalie and Alex manage, hostess and serve, while son-in-law Steve Gunther works behind the bar. “Steve and I were living in North Carolina and I was working in an office, but secretly, I’ve always wanted to do something like this,” said Alex. “When it came around for my dad, I felt like it was right!”

But he also shares his kitchen knowledge with staff who aren’t blood relatives. “I try to show my team everything I know about hard work,” he said. “I put in 12 to 16 hour days, but the end result is that I get watch people enjoy my food.”

And even more than a restaurant, it’s a chance for Wrubleski to join in the community. “My biggest passion is when I see people at the store or at the gym, and they tell me they love this place. They’ve given me so much support in this endeavor.”

It’s part of the reason he makes good food at reasonable prices. A 12-ounce sirloin steak with three sides costs $23, his specialty fried haddock costs $15. “I want to take care of the locals,” he said. “I don’t want anyone to say, ‘It was good, but I can’t afford to eat there again’.”

MaryEllen was the chairwoman of the annual food drive for the Cooperstown Food Pantry, and with the one-year anniversary coming up, Wrubleski plans to honor her memory by making sure everyone in the community has enough good food to eat. “I’m going to volunteer down at one of the food pantries on Christmas,” he said. “I realized I have to give back some of what I’ve had to those less fortunate.”