THE PARTIAL OBSERVER: Be Afraid, But Do It Anyway

Be Afraid, But Do It Anyway

Why did I say yes? How could I have let myself be persuaded to compete to be the guest conductor of the Catskill Symphony Orchestra? Especially for the Cabaret concert, which is the symphony’s biggest fundraiser. Thinking back to my experience in the late 1990s, I can’t help but reflect and recall that without the extra money from this annual event, the symphony would have folded and our region would have lost a most valuable asset.

Classical music for families in rural upstate New York? The Cabaret concert is one of our region’s most prized annual events. Entire families dressed up and sometimes trudged through snow for this mid-winter concert, carrying beautiful picnic baskets with table cloths, special drinks, wine, and beautifully prepared hors d’oeuvres—and even desserts—with thermoses of hot drinks. Some concertgoers left their kids home and used this as a date night, or an excuse for a night out with friends.

END_OF_DOCUMENT_TOKEN_TO_BE_REPLACED

Audition For The
Catskill Choral Society

AUDITIONS—5 p.m. Love to sing? Have prior choral experience? The Catskill Choral Society is seeking new members for their 2023 performances. Upcoming dates include a concert of Brahms choral works to be performed April 21 and 23 as well as a collaboration with the Catskill Symphony Orchestra on famous Hollywood movie scores. Rehearsals are held from 7-9 p.m. Thursday evenings starting 1/26. Auditions are by appointment at the Unitarian Universalist Soceity Chapel, 12 Ford Avenue, Oneonta. (607) 435-7008 or visit catskillchoralsociety.com

END_OF_DOCUMENT_TOKEN_TO_BE_REPLACED

Gift Wrapping for a Sound Cause

Gift Wrapping for a Sound Cause

Volunteers will be at the Oneonta Farmers’ Market between 9 a.m. and noon to wrap gifts large, medium and small.

Later, stop in at the Atrium of Foothills Performing Arts and Civic Center, Market Street in downtown Oneonta, and volunteer wrappers will make your special gifts as beautiful on the outside as they are on the inside.

Donations for gift-wrapping will be accepted to benefit the Catskill Symphony Orchestra. For information, visit catskillsymphonyorchestra.org.

Enjoy The Music Of The ‘Slavic Spirit’

SYMPHONY – 7 p.m. The Catskill Symphony Orchestra presents their second concert ‘Slavic Spirit’ featuring some of Maestro Maciej Zoltowski favorite works from his native Poland and neighboring Bohemia like ‘The Bartered Bride’ overture by Smetana and Symphony #6 by Dvořák. Tickets, $40/adult at the door. Held at The Foothills Performing Arts Center, Oneonta. (607) 436-2670 or visit catskillsymphonyorchestra.org

BE AN ANGEL – The Angel Tree Program has returned. The community is invited to adopt a family and then find Christmas gifts for each of the children listed. Gifts are due unwrapped and without tags to either the office of The Freeman’s Journal at 21 Railroad Ave. in Cooperstown, or at the Salvation Army Church at 25 River St. in Oneonta by December 9. Visit allotsego.com/angel-tree-program/ for details

END_OF_DOCUMENT_TOKEN_TO_BE_REPLACED

Reflecting on his own graduation concert in 1997, Żółtowski elaborates.

“It opened with Smetana’s Overture from “The Bartered Bride.” I love the downright contagious optimism and inexhaustible energy. Since then, my programs frequently feature symphonies by Dvořák, including those lesser known—like the ‘Fifth’ or the ‘Sixth’—which we are going to play with the CSO.”

END_OF_DOCUMENT_TOKEN_TO_BE_REPLACED

Music of The Revolutionaries with
the Catskill Symphony Orchestra

END_OF_DOCUMENT_TOKEN_TO_BE_REPLACED

CSO Returns for Its 69th Season

CSO Returns for Its 69th Season

New Concerts and New Leadership
Kick Off Orchestra’s Next Chapter

With this excitement, the CSO announced its return for a blockbuster 69th season at 6 p.m. on Saturday, October 15 at the Foothills Performing Arts Center in Oneonta. After halting concerts during the pandemic and successfully completing a thoughtful return in 2021, the 2022-23 season presents a brand-new concert series carefully crafted under the direction of Maestro Maciej Żółtowski, now in his third season with the CSO.

Saturday’s concert, “The Revolutionaries,” opens the CSO’s next chapter with an invigorating celebration of the “Great Revolutionaries,” Ludwig von Beethoven, Charles Ives and Luigi Cherubini—Beethoven, a brilliant composer who never gave up on the ideas of human liberty, fraternity, and equality; Cherubini, highly acclaimed for his work for the young French Republic; and Ives, the great American Modernist who purposely left “The Perennial Question of Existence” unanswered.

END_OF_DOCUMENT_TOKEN_TO_BE_REPLACED

Rosemary Summers brings a lot of experience to the new Fenimore Chamber Orchestra.

“I actually got my start in the music business with the Catskill Symphony Orchestra and the Catskill Conservatory back in the 70s,” Ms. Summers, Chief Operations Officer of the new orchestra said.

“Everything that is involved in the physical production of a concert is what I am in charge of. Hiring the
appropriate musicians, securing the venue, providing the sheet music for everyone…chairs, stands lights, front of house, ticketing ushers…that’s what I’m in charge of.”

“That was back in the 70s. I was a student of Carleton Clay, the founder of the Conservatory. He offered me a job and taught me how to be a music copyist. Chuck Schnieder saw my work and he asked me to be a copyist as well for Catskill Symphony.”

END_OF_DOCUMENT_TOKEN_TO_BE_REPLACED

“I am a busy man!” said Maciej Żółtowski.

“I am still the Music Director at Catskill Symphony Orchestra and am now the Music Director at Fenimore Chamber Orchestra!”, he said. “It’s not unusual to be music director for two or three companies. I remember my first meeting with Thomas Wolf, Executive Director, and we developed a fruitful relationship. It just all grew from there.“

“In every organization, the music director is always the conductor of the orchestras that we are talking about. This works for me because my idea is to fill the seasons to compliment our concerts so we can provide the audiences in the area with a full season of symphonic concerts, chamber concerts, of different character that don’t conflict with each other. They are completely different types of music being presented,” Mr. Żółtowski said.

END_OF_DOCUMENT_TOKEN_TO_BE_REPLACED

KNOXVILLE, TN – Joseph L.G. Mone will be sorely missed by his loving family and the many students and music communities he influenced and inspired over the years. Known to all as Joe, he was born in Suffern, NY on November 18, 1936. He attended Ithaca College for music education, and then stepped into a lifetime of music!

Joe was an accomplished musician. Playing upwards of 30 instruments, he was most known for drums, percussion, trumpet, flugelhorn, and woodwinds. He performed his entire life as a professional musician as well as being a formidable force as a music teacher.

END_OF_DOCUMENT_TOKEN_TO_BE_REPLACED

HAPPENIN’ OTSEGO for SATURDAY, MAY 14

END_OF_DOCUMENT_TOKEN_TO_BE_REPLACED

She was born December 15, 1931 in Lancaster, Ohio to Henry and Freda Cook. They later moved to Steubenville, Ohio where she graduated from high school. She then attended Ohio State University where she obtained a BS degree in Music in 1954.

It was at Ohio State where she met a fellow music student, John Mazarak. They dated through college and were married after her graduation on June 18th, 1954. When John was hired at Oneonta State College, they moved to Oneonta in 1959. They had two children, Eric and Ann.

Mary Ann stayed very active throughout her life. She taught music in Mt. Vernon Ohio, as well as work as a librarian at Ohio State. Later in life she was Assistant Director of the Catskill Area School Study Council.

Music was a major part of Mary Ann’s life. She studied french horn in college until the cello became her instrument. She performed throughout her life, with the Oneonta/ Catskill Symphony from 1959 to 2008. She was a member of the original Glimmerglass Opera orchestra and performed with them until 1986. John and Mary Ann formed the Woodside String Quartet, performing for many events and weddings.

END_OF_DOCUMENT_TOKEN_TO_BE_REPLACED 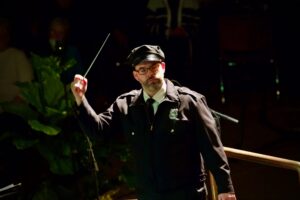 The Catskill Symphony Orchestra’s Cabaret fundraiser on March 26 raised more than $44,000 – not including ticket sales – attracting a sell-out crowd of some 550 attendees to SUNY Oneonta’s Alumni Field House.

“This is one of the most successful Cabarets, ever, in the more than 20 years we’ve been doing it,” says CSO Chair Sarah Patterson, who has volunteered with the CSO for more than a decade and whose husband, Paul, won this year’s guest conductor competition.

Paul, a retired fleet master and director of Oneonta Public Transit, competed against Stagecoach Coffee’s Matt Grady and SUNY Oneonta’s Dr. Tracy Allen to raise the most money for the CSO and END_OF_DOCUMENT_TOKEN_TO_BE_REPLACED

SYMPHONY – 7 p.m. The Catskill Symphony Orchestra presents their Cabaret fundraiser, featuring fun works from Strauss and Dvořák with guest star Mandy Harvey who is an award winning jazz and pop singer, songwriter and inspirational speaker. The program will be followed by the guest conductor competition to see who gets to wield the baton for Sousa’s ‘Stars & Stripes Forever.’ Health guidelines will be followed. Cost is $50/adult. SUNY Oneonta. Visit catskillsymphonyorchestra.org

END_OF_DOCUMENT_TOKEN_TO_BE_REPLACED

COOPERSTOWN – Long time Cooperstown, N.Y. resident Dr. Emery Cline Herman, Jr. died peacefully at home with his wife by his side on Saturday morning, February 26, 2022 at the age of 92.

Born July 24, 1929 in La Grange, Georgia, Emery was the eldest of three children born to Emily Park Herman and E.C. Herman, MD. He was a graduate of Darlington School, Emory University and The Johns Hopkins University School of Medicine (class of 1953).

While at Hopkins, he met Margaret (Peggy) Whitaker of Springfield, Ohio, and they married in 1955. After a stint at the National Institutes of Health, in 1959 Emery took a position at Mary Imogene Bassett Hospital and moved his young family to Cooperstown. He began work as a research physician with Dr. Don Thomas and Dr. Joe Ferrebee in the field of bone marrow transplantation. He soon transferred to clinical medicine at Bassett, where he spent his entire medical career as a practicing physician in internal medicine, retiring in 1994. In addition to hospital commitments, Emery was actively involved in the greater Cooperstown community, serving on the Village Board of Trustees and as Cooperstown Mayor in 1970-72. Emery and Peggy raised five children together in Cooperstown until her untimely death in 1975.